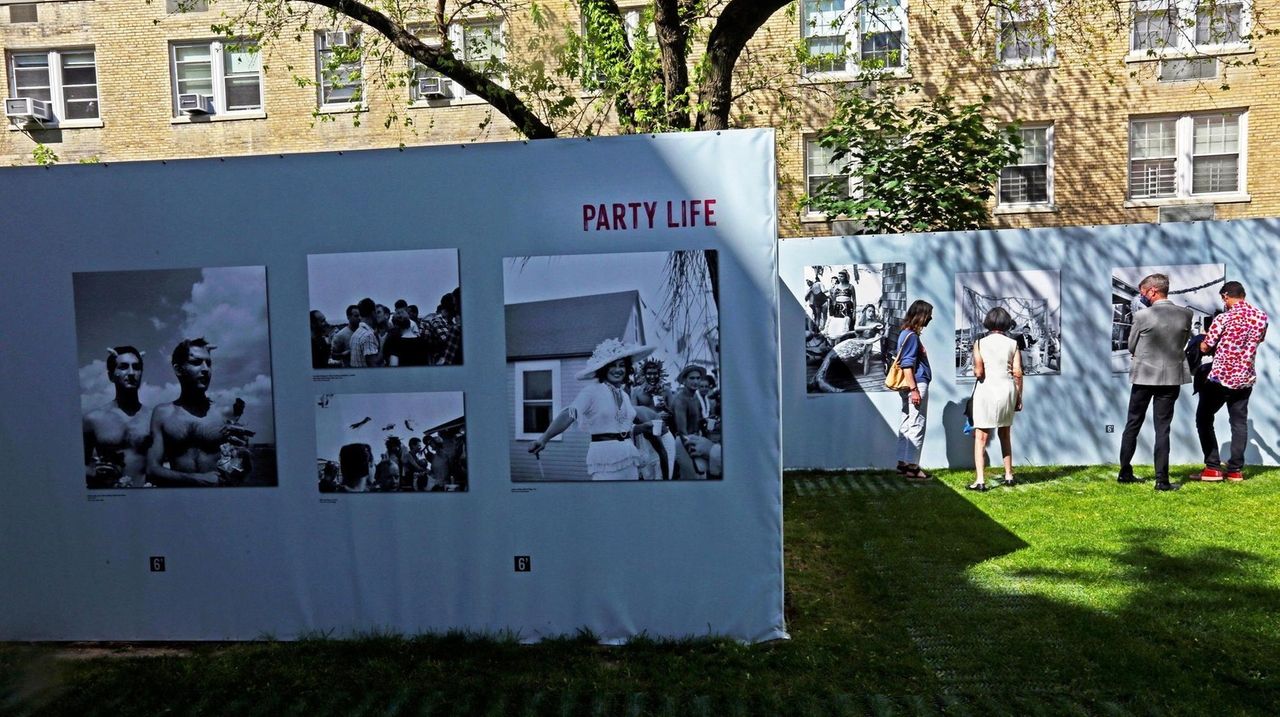 The New-York Historical Society opened an exhibition in Manhattan that explores the gay and lesbian community that flourished during the 1950s in Cherry Grove on Fire Island. Credit: Bruce Gilbert

The 41 acres of beachfront just south of Long Island’s mainland was a relative refuge beginning in the 1940s, when homosexuality could mean jail, losing one's job and being disowned.

Unlike nearly anywhere else in the U.S. at that time, in Cherry Grove, two people of the same sex could hold hands in public, dance together, and more. Those who didn’t conform to traditional norms of sexuality and gender felt freer to socialize outside of the closet. There were Broadway stars in drag and risqué humor thrived.

Inaccessible even today except by water, the Fire Island community was one of America’s first gay beach towns.

It's the subject of an exhibition called "Safe/Haven: Gay Life in 1950s Cherry Grove," which opened last Friday at the New-York Historical Society's outdoor yard. It runs through Oct. 11. Admission is free but timed, with tickets available online.

"When you get on the ferry, and the ferry gets just past the Sayville channel, and the throttle opens up on the ferry, and you’re in the Great South Bay, and you are leaving America, it is just this incredible opportunity to just feel the weight of the world wash behind you," State Assemb. Deborah J. Glick of Manhattan, who first visited Fire Island in 1972, said Friday at the exhibition’s opening reception.

Through 70 photographs, plus images of news articles, ads, tickets, a menu, cards, and party favors and invitations, the exhibition tells the story of this tiny community in a tiny hamlet on the barrier island south of Long Island.

One of the curators, Susan Kravitz, 77, of Roslyn Heights, said she hopes the exhibition shows how despite those oppressive and dangerous times for gay people, life at Cherry Grove offered "unleashed joy and playfulness," even before the history-changing riots in 1969 at the Stonewall Inn augured in the modern gay-rights movement.

"You’ll see that people in these photographs were joyous. They were having a great time. They were happy. You could feel the laughter that was going on," said Kravitz, a seasonal renter who first went there in 1979.

Depicted are the ferries and water taxis that would shuttle Grovers in and out; the campy, outdoor, themed parties ("Baby Party," "Hat Party," Diaper Party," "Animal Party"); the uninhibited sexuality expressed despite the risk of police raids; the cabaret, theater and film people, and actors, artists and poets such as W.H. Auden who found their way to Cherry Grove; even people just relaxing on the beach.

But it wasn’t a completely safe haven.

The 1950s were a time when nearly everything about homosexuality and nontraditional expressions of gender were illegal: bars could lose their licenses for allowing gays to gather, sodomy was punishable by jail or fines, as was failing to wear a sufficient amount of clothing corresponding to traditional gender norms.

So, the exhibition says, as long-standing locals and families from the mainland sought to "reclaim" the area — there was nude sunbathing and cruising — the Suffolk County Police Department and other cops would routinely conduct raids, handcuffing arrestees to telephone poles before ferrying them to jail. Reports of the arrests — complete with names, addresses and employers — would be printed in the local newspapers, including in Newsday and The Suffolk Times.

One article on display at the exhibition reports the arrest, and guilty plea hours later, of a 29-year-old man for "conduct offensive to public health and decency." He was to be jailed in Riverhead for 180 days.

Police did little to stop drunken teens from the mainland who would go across the bay to harass and beat up Grovers, according to the exhibition.

Before it was a gay mecca, Cherry Grove was frequented by a small community of Long Islanders from the Sayville-Patchogue area who came to go fishing or spend summertime with their kids. Still, there were also gay Grovers, as they came to be known, particularly theater people who were among the first set to venture there from New York City.

After the Great New England Hurricane of 1938 swept in, which the National Weather Service calls "one of the most destructive and powerful hurricanes in recorded history," with Long Island in its path, Cherry Grove began to transition.