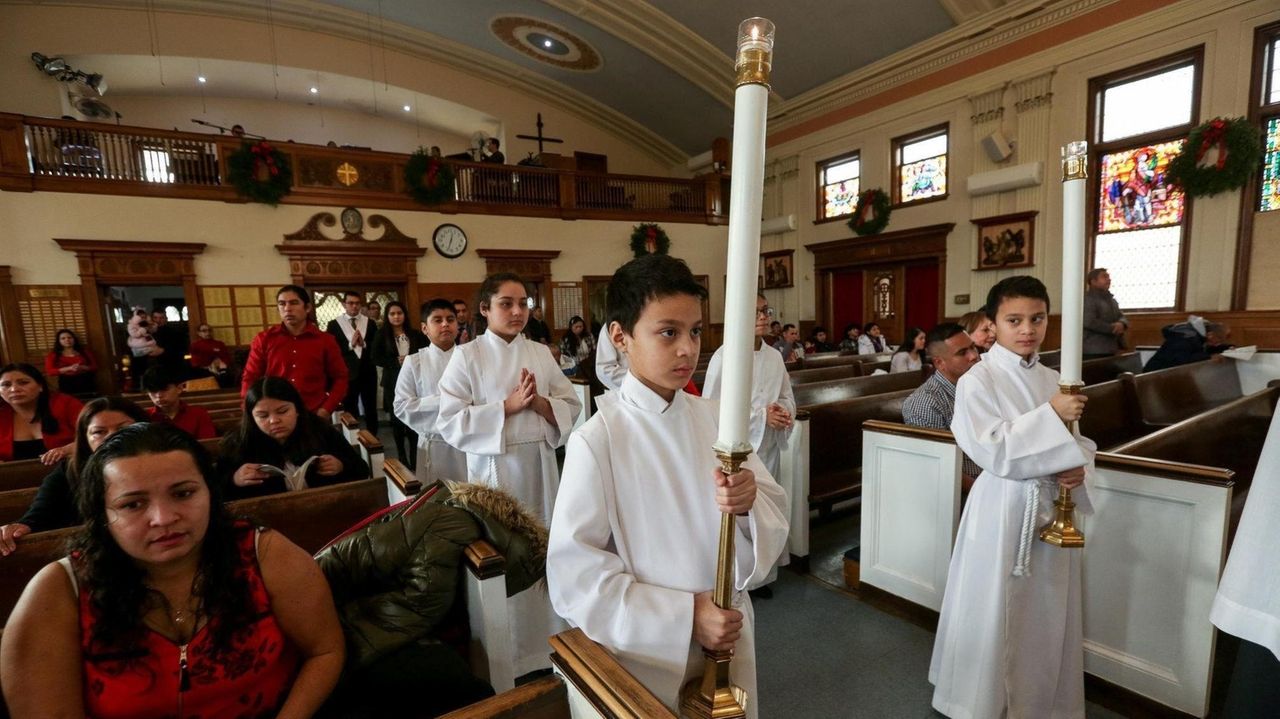 Song and prayer filled Long Island churches on Wednesday as parishioners celebrated Christmas Day Mass. They knelt together to pray for peace, love and forgiveness, basking in the light from stained glass windows. Credit: Newsday

Song and prayer filled New York churches on Wednesday as people came together to worship on Christmas.

Strangers shook hands and softly wished each other “merry Christmas.” Their voices mingled in renditions of “Silent Night” and “Joy to the World." They knelt together to pray for peace, love and forgiveness, basking in the light from stained glass windows.

“It was really magical,” Amanda Baulch, 52, of Australia, said after morning Mass at St. Patrick’s Cathedral in Manhattan.

Packed into pews, churchgoers were dressed in their Sunday best or jeans. Some families were decked out in festive Christmas colors: adults in red and green sweaters, girls in red dresses with bows in their hair and boys in tailored suits and bow ties.

They listened to clergy who urged them to put their faith in God and forgive others.

“God is calling on us to put down our differences and to put trust in him,” the Rev. Alessandro J. da Luz told nearly 400 congregants at Roman Catholic Parish of St. Agnes Cathedral in Rockville Centre. “Let go of our destructive beliefs and be open to God’s will.”

The Rev. Ed Dougherty entreated those gathered in St. Patrick’s to “enter each other’s hearts” and emphasized that “the greatest gift we can give before leaving this building is Communion with Christ.”

At St. Patrick’s, worshippers came from all over the world and sang “Silent Night” in three languages: English, Spanish and German. Many entered the hall wide-eyed in awe of the beautiful cathedral and took pictures while they moved to the front.

One family from Italy managed to bring their little white dog Lulu into the service in a small bag.

As people streamed in, NYPD police cars, their blue and red lights glowing, stood parked outside with officers standing in heavy armor, helmets and high-powered rifles.

Iryna Yaykemko, 43, sat beside her fiance, George Melendez, 44, during the service and remained in silent prayer for a time afterward.

“I wanted to give thanks to God for my family and everything I’ve had this year,” said Yaykemko, who lives in Manhattan.

After the service, the couple planned to go home and open gifts with their children.

“They are waiting for us,” she said.

But the "gift of all gifts" is Jesus, the Rev. Luis Miguel Romero Fernandez said at a Spanish-language Mass at Our Lady of Loretto Roman Catholic Church in Hempstead, from an altar blanketed with red and white poinsettias.

It was a sentiment echoed by several of the 500 worshippers, who said they were thankful for the gift of Jesus, his birth and his blessings.

“We need to thank God for all he has given us,” parishioner Nora Villán said in Spanish. “We give never-ending thanks on Christmas … for all the joy he has given us.”

Maria Clemira Martinez, 68, was at Mass visiting from Paraguay, as she does every Christmas, to "thank God for the life he has given us, because life is a grace from God.”

But the Hempstead church attracted a bigger crowd — with an overflow of 1,600 people — for midnight Mass on Christmas Eve. That's because the night before Christmas is more meaningful than Christmas Day for many Latin Americans, in part because Jesus was born in the night, Romero said. Romero was recently named vicar for Hispanic Ministry and Evangelization for the Diocese of Rockville Centre.

A smaller crowd gathered at the First Baptist Church in Riverhead on Wednesday morning. Parishioners hugged each other and wished one another merry Christmas upon entering the church. During the service, they swayed and danced to drums and a choir sang a gospel music rendition of “O Come All Ye Faithful.”

Pastor Cynthia Liggon, who delivered the Christmas prayer, asked the crowd of 60 to spread the spirit of the holiday where it was needed most — hospitals, nursing homes and prisons — so "they might feel the joy of Christmas this morning. That someone might be kind to those who need a kind word and they, in turn, might be kind to someone else.”

Pastor Charles A. Coverdale, who led the Scripture and sermonette portions of the Mass, expressed his wishes for peace.

“May this day be a blessing to you and to all our communities around the world,” Coverdale said.

This story was reported by Craig Schneider, Jean-Paul Salamanca, Robert Brodsky and David Olson. It was written by Rachelle Blidner.