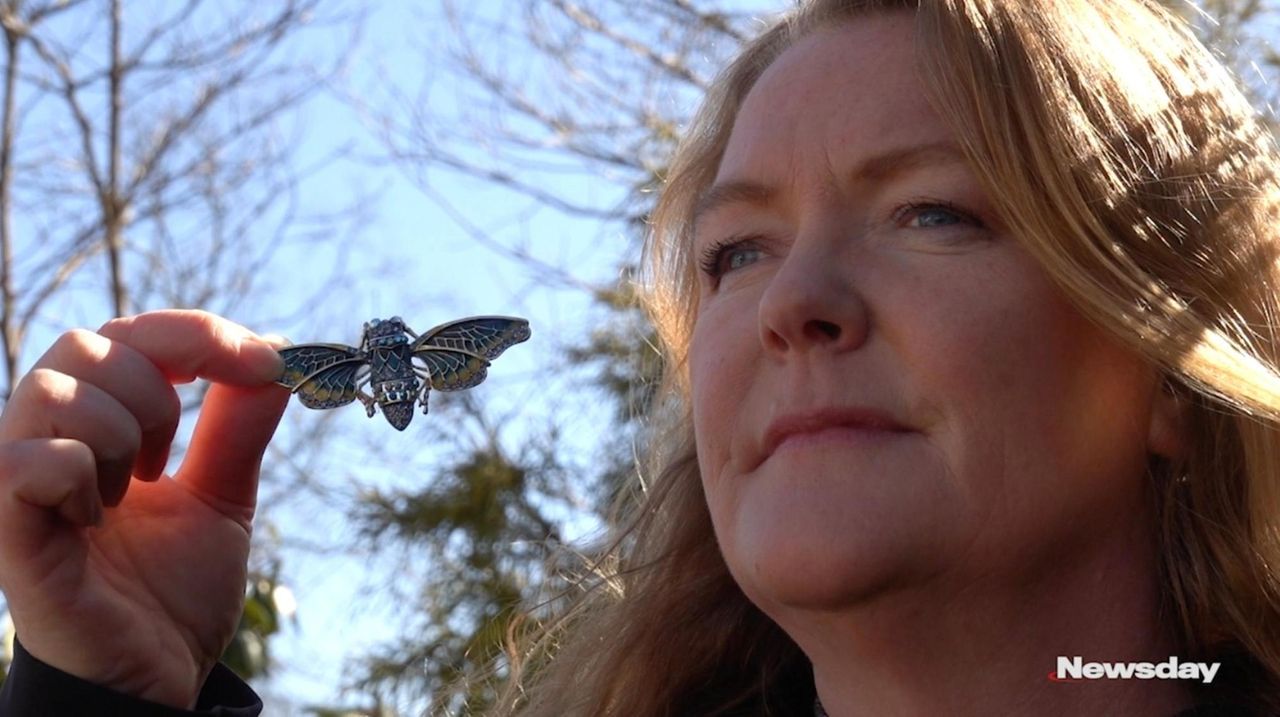 Jody Gangloff-Kaufmann, an entomologist at Cornell University, talked about the "Brood X" cicadas. The insects, which are on a 17-year cycle, are expected to return this year. Credit: Deborah Egan-Chin; Photo credit: Dr. Matt Frye, NYSIPM Program, Cornell University

These cicadas are resurfacing on Long Island.

Expected in May and with us for about six weeks, a local brood of the periodical insects are due to emerge in 2021 — after 17 years feeding on tree root sap in the soil — and sound their earsplitting mating call.

This group is part of Brood X, one of nation's largest broods of periodical cicadas, and billions are expected to emerge across 15 states, according to the American Museum of Natural History.

But due to construction of buildings and roads, we might not see them on Long Island.

To understand why, let's review Cicadas 101.

It’s no coincidence a cicada’s life cycle is 17 years -- or 13 years in some parts of the southeast United States -- both prime numbers. It’s a survival mechanism for the species, as is the sheer quantity that gather together in one spot.

Cicadas lack toxins to deter predators, but evolution has equipped the insects to survive nonetheless. Coming out every 13, or 17, years makes it hard for predators to adapt to their life cycle. And by gathering in such high numbers — in a process called predator satiation — there are just too many in one place for predators to make a dent in the population.

"It’s the highest density of terrestrial animals in the world," said entomologist Doug Pfeiffer, a professor at Virginia Tech. "They're such a flash in the pan. They're here for a few weeks and they disappear for another 17 years."

But it’s not just predators for whom the unusual life cycle causes difficulty.

"These insects take so long to develop, it's hard to do research with them," Pfeiffer said.

The lifecycle of a cicada

Starting with 1, click on each number to learn about the cicadas' strange 17 year-life cycle.

A female cicada can lay between 300 and 500 eggs each in tiny holes made in tree branches. Credit: Dr. Matt Frye, NYSIPM Program, Cornell University

Weeks later, young cicadas, called nymphs, hatch from the eggs and drop to the ground, where they immediately start to burrow.

Here, a cicada nymph, part of Brood XIII , crawls across the ground in May 2007, at the Chicago Botanic garden in Glencoe, Ill. Credit: AP Photo/Charles Rex Arbogast

3 3 Feeding off the roots

Once underground, they will attach to the tree's roots and they will spend years there, feeding on tree sap.

When the dormant period ends, the adult cicada will emerge from underground at sunset, guided only by instinct, according to National Geographic.

This is a typical hole from which a nymph will emerge. It was photographed in Otsego Park in Dix Hills in 2008, when we were awaiting the emergence of Brood XIV. Credit: Newsday/Bill Davis

The cicada climbs the trunk of a nearby tree. It's there that it sheds its skin, allowing the adult cicada to emerge.

Credit: This exoskeleton of a cicada was found on a maple tree in the front yard of a home in Setauket in May 2004. Credit: Joel Cairo

They spend a few weeks as adults up in the world, using their ear-piercing sounds to attract other cicadas to mate with. Then, in the case of females, they will lay eggs, starting the process over again.

At the end of the season, all but the nymphs die, and the dead insects become food for other insects and birds – any scavenger species. Credit: 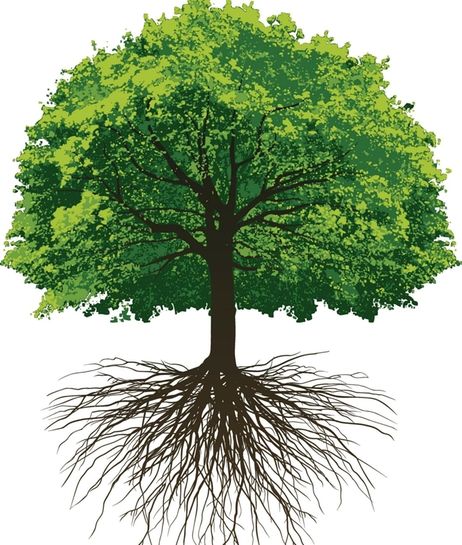 During those years underground, the nymphs are feeding on tree sap from the roots of trees. They prefer hardwoods such as oaks, maples, and apple trees.

"Most of them, it takes 17 years to develop, and then they all come out at once, and then they spend a few weeks as adults up in the world, you know, up where we can see them, singing and mating, then laying eggs, and then after the eggs hatch, they tunnel down the roots and attach and then they're set for another 17 years," he said.

Why all the noise?

That ear-piercing noise is a mating call that draws females — and other males.

Pfeiffer likened the surge of cicadas to humans socializing at a bar on a weekend to meet mates. The sound of the song tells cicadas that it’s time to amass.

'It's like just going down to a nightclub on Saturday night, I guess.'

"It just brings 'em all together to make finding mates easier, so it's like just going down to a nightclub on Saturday night, I guess," he said.

Unlike crickets, which make their sound by rubbing their wings together, cicadas produce their song with a special organ called a tymbal — a group of ribs that buckle when a cicada's muscles are flexed. Each buckle makes a click sound, and lots of clicks make the (in)famous buzzing, according to the nature museum at the Chicago Academy of Sciences.

Explained Pfeiffer: "It's a shrill buzzing up in trees, and when you have the millions of them around that you'll have during an outbreak, it's just overwhelming; it's just deafening. It's a really loud calling."

When to look for them

Periodical cicadas are slightly different from annual cicadas. Adults are about an inch and a half long, black, with red-orange markings, with reddish clear wings that are held tent-like over the body. (The annual kind are brown with greenish markings.)

Beyond looking slightly different, annual cicadas come out in the mid- and late summer, rather than in mid-May for about six weeks for the periodical kind.

"They will sing for a few weeks. You may find them mating up on the tree branches," Pfeiffer said.

And at the end of the season, all but the nymphs die, and the dead insects become food for other insects and birds — any scavenger species.

Seventeen years ago — in May 2004 — was the last time these cicadas were due on Long Island.

In May 2004, George W. Bush was president, we had just said goodbye to "Friends" and we were listening to Usher's "Burn" on our new iPod Minis.

The final episode of "Friends" aired on NBC.

And biologists went looking and listening for this brood of cicadas, but they could barely be seen or heard.

The cicadas might show up this year, but development and construction may mean otherwise.

Jody L. Gangloff-Kaufmann of Babylon, an entomologist with Cornell, is not one of them.

'This Brood X here doesn’t look like it has much hope on Long Island.'

"We hope! We really hope!" she said. "This Brood X here doesn’t look like it has much hope on Long Island."

Pfeiffer says there are 15 broods, three of which are 13-year cicadas and the remainder on a 17-year cycle. Brood II, also seen, and heard, on Long Island and elsewhere in the region, last resurfaced in 2013 and won't come out again until 2030, Pfeiffer said.

That’s due to development on the Island, and forces unknown, that have caused the population to have "diminished considerably."

Where to look for them

Two of the places where the periodical cicadas might be seen are in Connetquot State Park or in East Setauket, though in 2004 a biologist who went out to those places hoping to see the insects was disappointed, Gangloff-Kaufmann said.

"Why do they come? Why do they not come? We’re not quite sure, but we know development has a lot to do with it," she said.

In earlier years, Gangloff-Kaufmann said, there were more empty fields and lots and farms.

"We’ve built houses everywhere we can, and roads," she said.

That means fewer trees for cicadas to feast and mate on.

"Even when we cut down a field of trees, or a forest, or woodlots, that can change their trajectory, that can kill them. Instead of woodlots, we have soccer fields," she said.

"Any place that is, you know, basically untouched would be a good place to go," she said: Connetquot, parts of East Setauket, Caleb Smith State Park, or preserves in Nassau County.