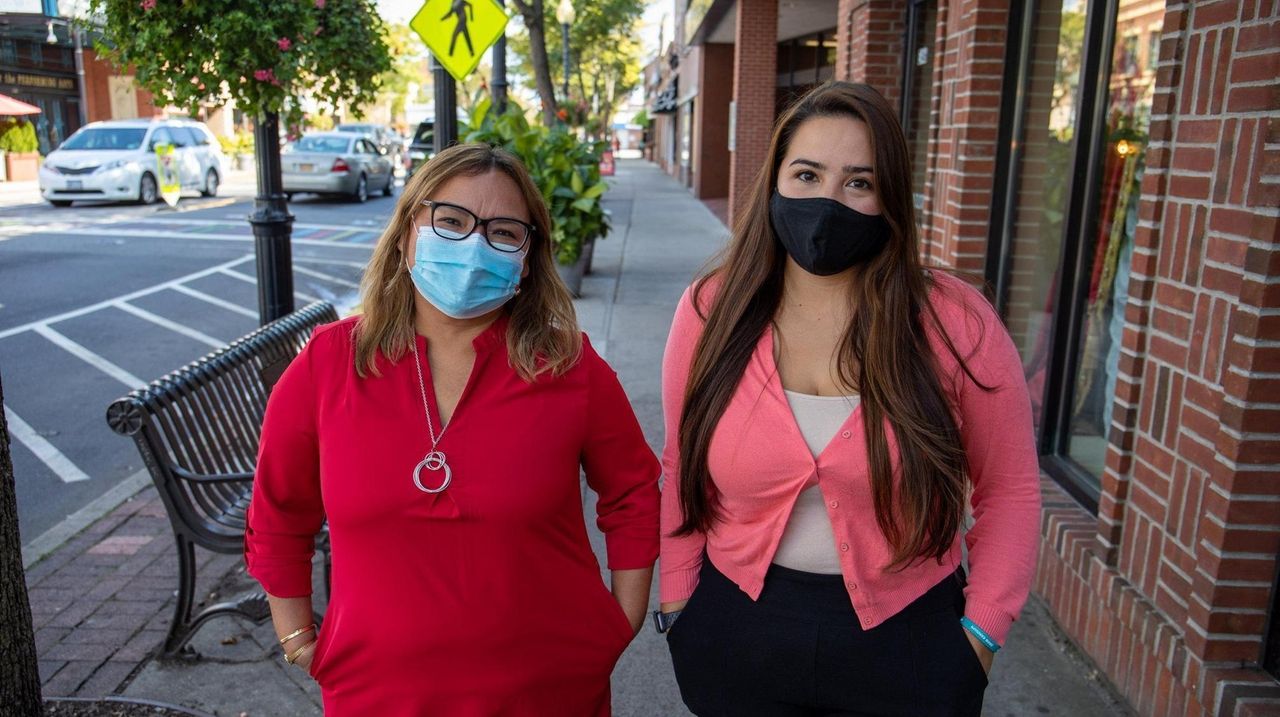 Some Latino Long Islanders will be casting their first votes in a United States presidential election. Newsday on Monday spoke with several new citizens making their voices heard by way of the ballot. Cecilia Dowd and Antonio Planas have the story. Credit: Morgan Campbell, Howard Schnapp; File footage

When Ludmila Molina was sworn in as a new American citizen on July 30, 2019, many thoughts raced through her head.

The 28-year-old Central Islip resident reflected on her nearly two decades on Long Island and the perseverance it took to be granted the privilege to vote. She also considered the impact her vote in next month's presidential election will have on other Latinos.

"Wow, I’m finally here. Throughout those 18 years, it just seems like it’s never going to happen," she said. "Having the opportunity to say I’m a citizen now, it was a huge joy. At the end of the day, what I hope for, is to be able to see a better outcome for my community."

"At the end of the day, what I hope for, is to be able to see a better outcome for my community."

According to U.S. Citizenship and Immigration Services, Molina is one of more than 14,000 immigrants who attained citizenship last year through its Long Island office.

Hispanics represent Long Island’s largest minority, with a combined 535,000 Latinos living in Nassau and Suffolk counties in 2019, according to census estimates.

Newly minted U.S. citizens on Long Island who are Latino expressed frustrations because, they say, issues affecting them are often overlooked by the government — especially if they are undocumented.

The new Americans who spoke to Newsday during National Hispanic Heritage Month say their votes in the presidential election stand as their turn to put a stamp on society. They want to affect the future on issues such as immigration reform, protecting "Dreamers" in the Deferred Action for Childhood Arrivals program, and obtaining work protection and economic assistance for Latino essential workers during the pandemic.

The 48-year-old Peruvian, who arrived in this country in 2004 on a two-year cultural exchange visa, said she had no intention of settling in the United States because she knew she would miss her family too much.

But after living here 15 years, during which time she built the nonprofit and fought for immigrant rights, the East Moriches resident said the presidential election has sweeping implications for Long Island Latinos.

"This presidential election is crucial for this country, especially for our immigrant community," she said. "There are so many things they’re putting on the table that will jeopardize people’s status and residency in this country."

"This presidential election is crucial for this country, especially for our immigrant community."

Molina and Maffei work together at the nonprofit. Molina, who hails from Argentina and will graduate from the CUNY School of Law in December, is a full-time employee at the Patchogue-based organization. She works there as a paralegal and community organizer. Maffei’s advocacy group has recently run voter-registration campaigns and efforts to increase immigrant participation in the census on Long Island.

Although Hispanics are not a monolithic group, new Americans who live on Long Island and spoke to Newsday shared many similar experiences.

They emigrated from their native countries because of poverty and few opportunities for work. Others said they entered the country through a legal immigration mechanism, and then expedited the road to naturalization through marriages to Americans. They also gained more secure immigration statuses by obtaining work permits or a green card. Some said they paid thousands of dollars in attorney and governmental application fees as they moved toward citizenship.

All said they initially struggled in the United States because they spoke little or no English. Some said they feared deportation.

Rafael Ayala Lopez, 73, of Freeport, officially became a citizen on Aug. 29, 2019. Speaking in both English and Spanish, he said he fled El Salvador in 1986 because of the country’s instability during a civil war and gang violence. He said he was relieved to know he will never be deported now that he is a U.S. citizen.

He acknowledges entering the country illegally and spending time in federal lockup before the government granted him authorization to remain in the country.

"I was just trying to improve my life," he said in Spanish. "That’s what we’re all trying to do."

He said a cousin offered a place to stay in Freeport and a job as a landscaper. The prospect of a pay raise from his $3 an hour at a water bed factory to the $5 per hour landscaping gig was enough to lure him from Phoenix to Long Island in 1988.

He says he views voting as an "obligation" because in his native country there’s no telling if his vote would count.

His nearly 35 years in America have been good to him.

"I always have food on the table. Every now and then, I’m able to give some money to my nieces," Ayala Lopez said. He’s proud to be an American, but he feels no different from other Latinos who aren’t.

Nilda Mule, 56, of West Babylon, arrived in Huntington on a tourist visa in 2001 with her then-husband and their 4-year-old daughter. Back home in Buenos Aires, Argentina, Mule said the government "didn’t help people" and her family’s economic prospects were bleak.

"When you vote, you can choose the best things for this country."

On Long Island, she made ends meet by cleaning homes. In 2010, Mule said, she did a two-week program working in a senior citizen’s home. She’s been working in the health care industry ever since, she said.

She married an American in 2015, who became her sponsor to obtain permanent residency, she said. Her husband works as a contractor for the MTA, and together they’re living comfortably, she said.

Mule looks forward to casting her vote in the November election, saying she wants to lift up Latinos who come from backgrounds similar to hers.

He fled Guatemala at age 14 for LI — and U.S. citizenshipAs a Guatemalan boy, he had to leave home after being pressured to join a gang, or die, says the now 27-year-old Southampton man. So he packed up a few belongings and set out in a new pair of sneakers for the Mexico-U.S. border.