Joel Vetter, chief of support services of Suffolk County Fire and Rescue services, was at Kings Park High School on Monday to show the app that Suffolk teachers and adminstrators can use in case of an active-shooter emergency. Credit: James Carbone

It’s not every day that a county executive visits a local high school, even in the summertime, which may account for a crowd of students gathered outside Kings Park High School on Monday, looking on through the glass of the building’s lobby at the phalanx of news cameras directed toward County Executive Steve Bellone and other officials.

The students couldn’t hear what was going on inside.

But the news conference was about them.

And more specifically, about their safety, and that of their faculty and staff should an active shooter — or some other life-threatening emergency — occur in the building. 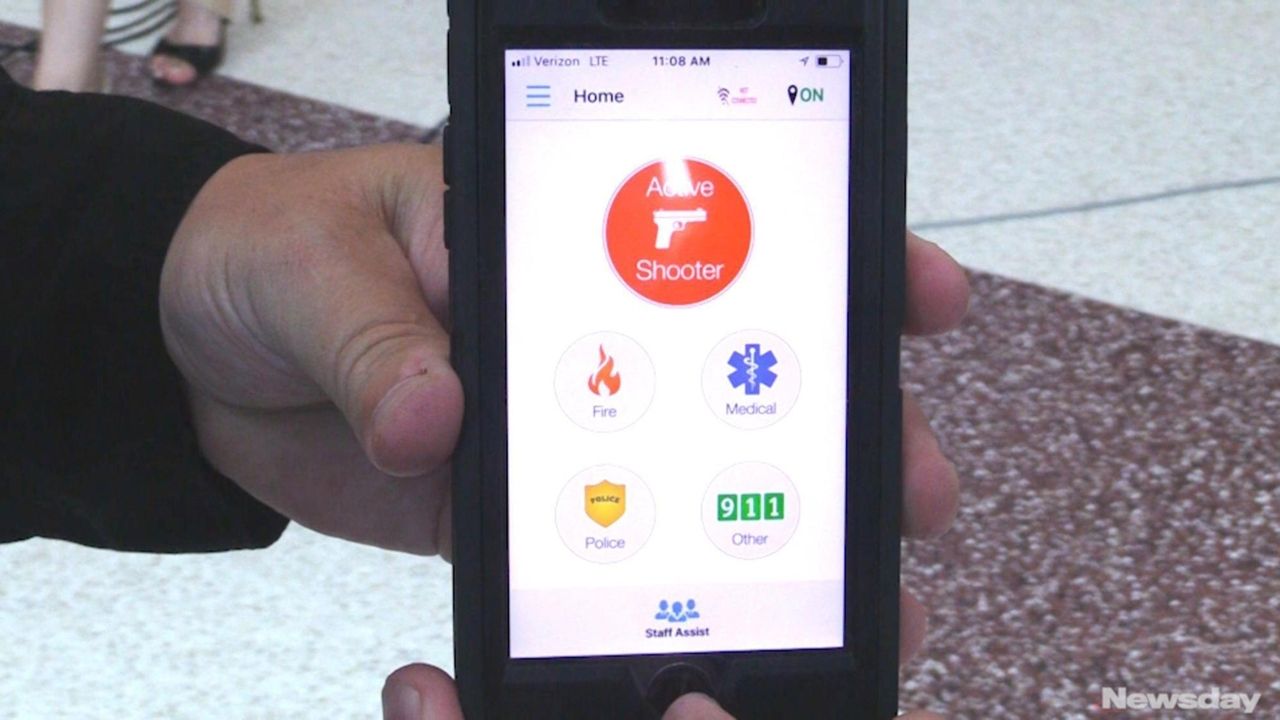 The news conference — about a smartphone panic button app — occurred the day after a gunman opened fire on random bystanders, killing two of them, in Canada; and two days after a gunman walked into a store in California, killed a woman and held staff and customers hostage, before surrendering to police.

“As a parent, you really did use to worry about whether your kid was buying too many snacks in the cafeteria,” Bellone, the father of three, said in an interview after the news conference. “Now, you worry about whether they are going to be safe, and you also have to grapple with how are you going to talk to them about safety when what you want is to preserve their innocence for as long as you can.”

Bellone said he had not — as yet — had occasion to sit through an active shooter prevention training.

But a growing number of businesses and schools are offering such training.

Such sessions can seem surreal, as the words “Active Shooter” are projected on a screen in a familiar work setting where just a few weeks before colleagues had gathered to learn about new computer software.

And then the session begins, with a history lesson in active shootings — and with that, there’s also the chilling realization that, somewhere, at some point, high schools and colleges had been giving similar training to students.

It was one thing, back in the day, to be taught to duck under a desk should a nuclear bomb come flying your way, quite another to consider options when the school or office building you know like the back of your hand becomes an active hunting ground.

There was all of that that, and so much more from the trainer — all with the goal of bettering a chance of survival. And then — what, less than a week later! — comes news of an active shooter at a Trader Joe’s in California. And another shooter, aiming at random pedestrians and innocents sitting in restaurants in Canada.

But on Monday, in that high school lobby in Kings Park, there also came news that Suffolk had bonded money enough to buy licenses to supply interested county public and private schools and colleges with RAVE, a panic button app that quickly alerts authorities of an active shooter or other emergency.

Which, the trainer said, makes a crucial difference in such dangerous, and wildly unexpected, situations.

Suffolk schools to receive smartphone security appSuffolk County Executive Steve Bellone signed legislation for a $2 million bond to cover the licensing of the Rave Panic Button, which alerts authorities in the event of an active shooter or emergency situation, for schools across the county.