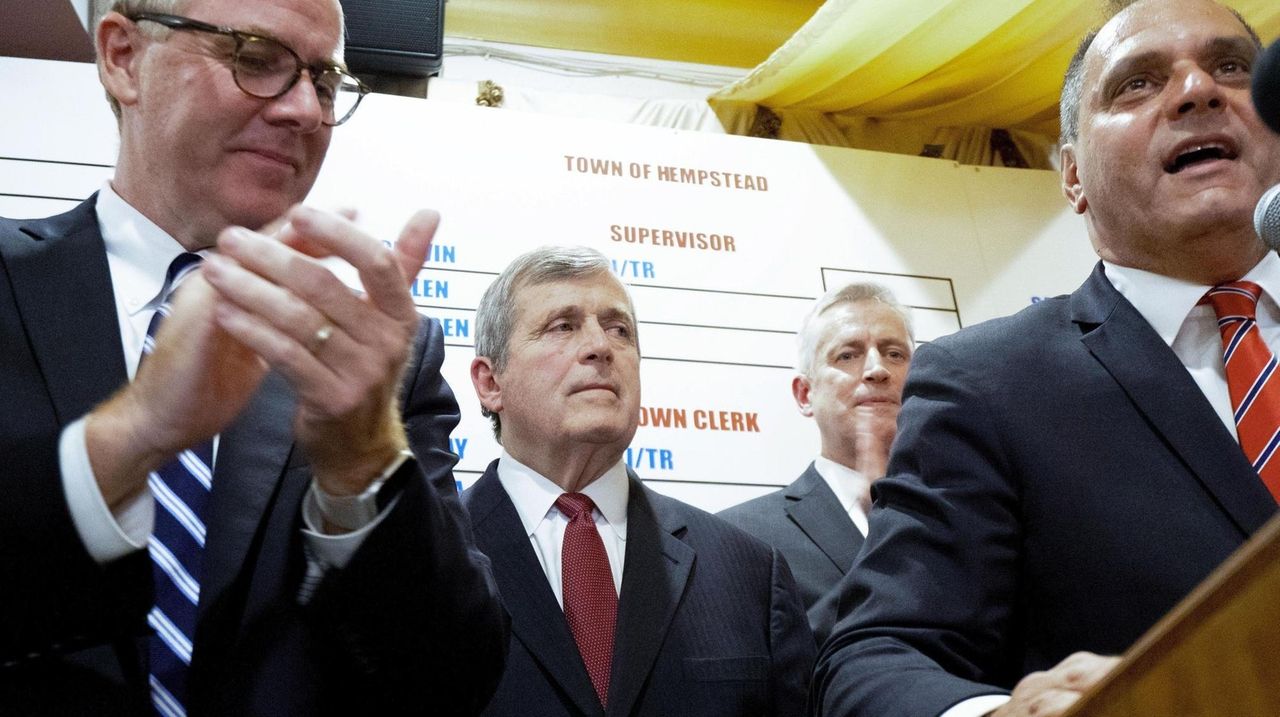 The Chairman, The Senator and The Ambassador walked into a bar.

The Chairman — Joseph Cairo, head of Nassau's GOP — and The Senator — former U.S. Sen. Alfonse M. D'Amato — walked up and onto a stage in Westbury to celebrate a string of Republican victories across the county Election Night.

"He was active and I don't know if he will continue, until, you know he can't do it anymore," Cairo later said of D'Amato. "He's 82 ... and he wanted to be there and he's the Grand Old Man of the party, so why not?"

As for The Ambassador — Joseph Mondello, Cairo's predecessor, who is now U.S. ambassador to Trinidad and Tobago?

"Funny you should ask," Cairo said in an interview Friday at the former bank building that, for decades, has served as Nassau Republican headquarters.

"I just had breakfast with him."

For Cairo, last week was a very good week indeed.

He had gone into the general election — thanks to early voting — with 1,000 more registered Republicans having cast ballots than Democrats.

And by Tuesday evening, Cairo was able to announce victory after victory from the stage of a restaurant adjacent to party headquarters.

The big win was in Hempstead Town, where Republican Donald Clavin, according to unofficial results, had bested the incumbent supervisor, Democrat Laura Gillen — to return control of the town to the GOP, which had held it for some 100 years.

Meanwhile, despite a fight from Democrats, the GOP held on to the town board majority, too — going so far as to win an open seat when late-entering candidate Christopher Carini, who never has held elective office before, won after a six-week campaign.

And GOP winners for receiver of taxes, Jeanine Driscoll, and town clerk, Kate Murray, a former town supervisor, made it a clean sweep.

But hang on a sec.

Was the plan to bring back Murray, who remained popular in Hempstead after a failed run for county district attorney, part of a strategy to try to catapult Clavin as a candidate into the county executive's seat in two years? If he left, Murray could, as she had in 2003, be appointed supervisor, a post she went on to hold for six terms.

"I don't see that happening," Cairo said, pointing out that Clavin "hasn't been sworn in yet. But people like to talk, they like to have rumors and talk."

So who would Cairo put forward as the GOP's candidate to take on incumbent Democrat Laura Curran instead?

"I will tell you this," Cairo said. "Not one person has said, 'I want to run for county executive in two years,' not one."

"Now they may be out there talking … but no one has come up to me."

Cairo also is expecting to field a number of requests from officials to run for State Senate next year, as Republicans attempt to regain some foothold against a Democratic majority.

Cairo said he's going to take the long view on that, too.

"I don't want to get into a situation where, say, we have county lawmakers win the Senate and then we have to worry, the next year, about keeping a majority with a lot of vacancies," he said.

But let's get back to Tuesday, when Nassau Republicans kept the majority in the county legislature — along with keeping the Oyster Bay supervisor, town board majority, clerk and receiver of taxes posts, too.

However, Cairo's roll screeched to a halt in the City of Glen Cove, where Democrats took mayor and City Council.

"I was disappointed," he said, "and surprised."

For decades as a GOP official, Cairo seldom has been surprised.

On election days past, he could be seen at the local party headquarters, in a strip mall in Franklin Square, rallying the troops and sending them scurrying, campaign literature in hand, to homes and neighborhoods ripe with as-yet untapped votes.

Early Tuesday, Cairo was back on his old turf.

"What am I going to do here, sit in this office and think about what is going on?" Cairo said. "That's not my personality."

By evening he was back in Westbury, where a town and county vendor, Butch Yamali, also was spotted on stage.

"He was off to the side and at some point, he must have come up the steps, or at least, that was reported to me," Cairo said.

Gillen had ordered Yamali's company to cease operations at a town-owned catering hall in Lido Beach. Yamali, who backed Clavin, has hired Cairo and his son for legal and project management work. Yamali has said there is nothing improper in how he runs his businesses.

Will the Republican victory end Yamali's issues with the town?

"I think they will review everything, and do what they believe is right."

"I may just be in this position, but it's a team and I am now the head coach," Cairo said.