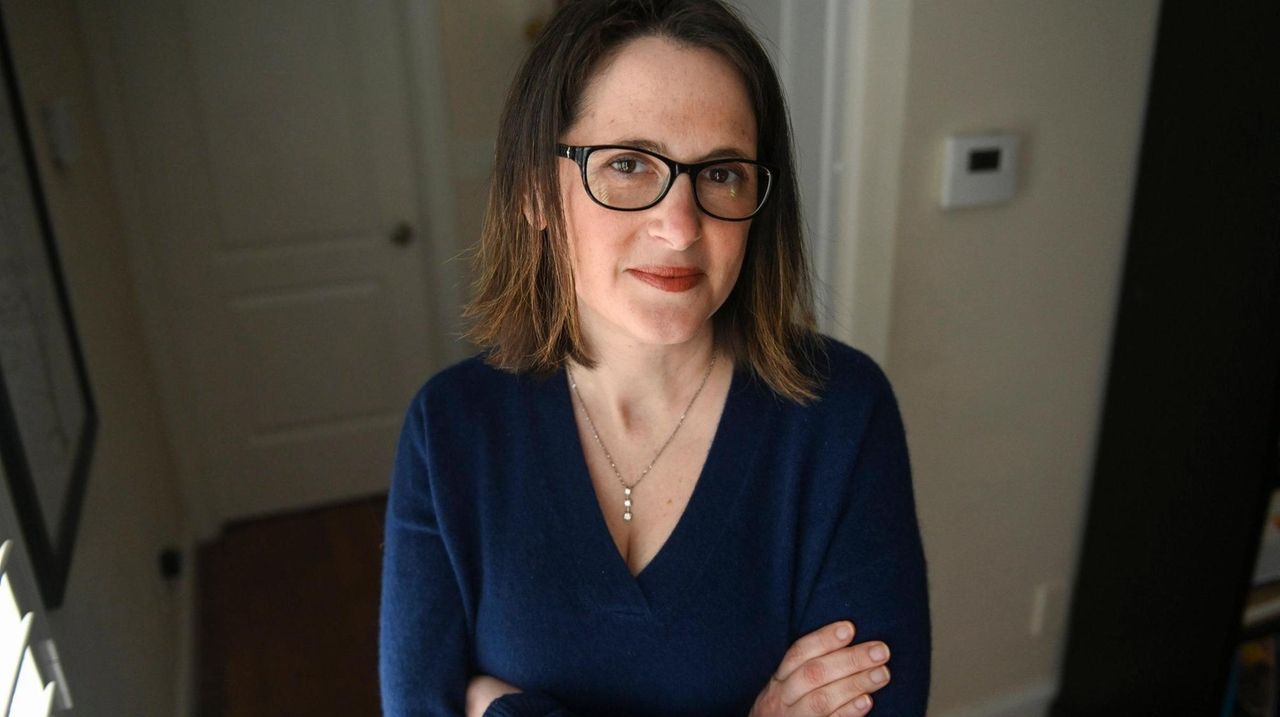 One Long Island family who planned to take a trip to China this summer reconsiders after the coronavirus outbreak. Credit: Newsday / Steve Pfost

Dina Patrizio was supposed to be heading on a seven-day cruise to the Bahamas in May, departing out of New Jersey and stopping off in Florida. But with the coronavirus spreading around the globe, she canceled it this week, even though no cases have been reported in those areas.

The fear of where the cruise ship and its employees have been, and what other passengers may be aboard the confined vessel, became too much for the 32-year-old North Bellmore resident. And there was no way she was going to risk the health of her 4-year-old son.

Friends, co-workers and her parents were saying to her, “You are crazy for even thinking about going,” she said

Coronavirus worries are gripping many Long Islanders. Travelers are canceling trips, others are debating whether to go, and still others are forging ahead despite concerns.

School districts are weighing whether to send students on spring break trips to Europe, while colleges are grappling with overseas programs — or what to do with international students who are studying here and come from countries where the virus is prevalent, such as China.

In one reverse scenario, a private high school in Stony Brook decided to keep its campus open during its February break so its boarding students from China would not have to return to their homeland.

Meanwhile, beleaguered travel agents are trying to impart a sense of calm to clients, telling them to be safe but to also put the coronavirus in perspective — the flu has infected and killed far more people just in the United States than the coronavirus worldwide, they note.

“If you look at the CDC [Centers for Disease Control] website [on] what is going on with the flu in the United States, that will scare your pants off,” said Liz Harnos of Burr Travel Bureau in Northport. “We tell people, ‘You didn’t cancel your trip because of the flu, did you?’”

She said she is trying to “talk people off the ledge,” though it isn’t easy, especially because the “news makes it sound like Armageddon.” On Monday when news broke that cases of coronavirus were spreading in northern Italy, “the phones were just off the hook” with calls from worried travelers. “It was unbelievable.”

Cindy Proothi had her dream trip all set: two weeks in China in mid-July with her two sons. The Forbidden City. The Great Wall. The terra cotta soldiers. The panda reserve.

Now, the Suffolk County resident doesn’t know what to do. She considered it “the trip of a lifetime,” and perfect timing to expose her sons — ages 11 and 14 — to one of the oldest and greatest civilizations on the planet.

But with the worldwide epicenter of the coronavirus outbreak centered in the city of Wuhan, she has serious reservations. She figures she has a couple of weeks to decide one way or the other — assuming the situation even stabilizes enough by the summer to permit travelers.

“We are probably 95 percent not going to be able to do it,” she said. “But I think there is still a possibility if it gets under control. But I wouldn’t go unless there is an extreme change in the next couple of weeks.”

Her father offered for them to visit him in Florida for her scheduled two weeks off, but “I said, ‘Dad, Florida and China are not equivalent,’” Proothi said.

Wayne Horsely, the former presiding officer of the Suffolk County Legislature, has already made his decision: he’s not going to China.

The retired politician was scheduled to travel June 8-24 with his wife on what he also considered a “dream trip,” but there are already so many logistical problems — arranging a flight, securing a visa — that the trip has practically canceled itself.

“There wasn’t a lot of in-depth thought on it,” he said. “It was, you know, what are we, kidding? This could be a pandemic that the whole world is going to be involved in. Going to the epicenter? That’s not something we want to do.”

They also did not want to “become part of the problem, not only because you are getting sick, but … you could bring it back to the United States,” he said.

Instead of China, they will stay more local during their June vacation: Charleston, South Carolina, and the Berkshire Mountains in Massachusetts.

Woodbury resident Ali Z. Mohammed spent six months planning a family trip to Mecca in Saudi Arabia for an Islamic pilgrimage known as Umrah. It was going to be a time of self-reflection and familial unity as they visited the famous mosque in Mecca and the grave of Islam’s founder, Mohammed.

Now he is not sure about the March 21-31 journey with his wife and two children, ages 18 and 21, partly because Saudi Arabia has imposed a temporary ban on pilgrims and visitations to the holy sites. No coronavirus cases have been reported in Saudi Arabia so far, though they have been in other parts of the Middle East, especially Iran.

“I’m trying to find the right balance,” Mohammed, 48, said. “If it is not safe to go, I’ll postpone my trip. If it gets better, and hopefully it gets better, then probably I will go ahead with the trip.”

Patrizio of North Bellmore is at peace with her decision to skip her cruise and do something instead on Long Island with her son. “The Bahamas,” she said, “will always be there.”

When the Stony Brook School, a private seventh grade to 12th grade day and boarding school, went on its break Feb. 14, it faced a dilemma: what to do with its students who come from China?

Head of School Joshua Crane said the institution did something it had never done in its 98-year history: kept the campus open, so the Chinese students would not have to go back home.

“We felt like it was necessary and part of our ethos [to] care for our students, to provide a safe haven, so to speak, for them here on our campus,” he said.

About 25 students from China, including 16-year-old Stephen Li, remained on the campus for the two-week break. Staff volunteered to help supervise them and keep them busy. There were local field trips, dinners at faculty members’ homes, an SAT prep course.

The school has students from around the world, including from countries such as South Korea. Stony Brook is in touch with all its students who went back home, and all are fine, Crane said. None will be allowed back on campus if they exhibit any coronavirus-related symptoms, and all are screened.

Some students from South Korea returned to Long Island early. “They saw what was happening over there and said, ‘I’m coming back,’” Crane said.

SUNY Old Westbury has two in South Korea, one in France, and one in New Zealand, for instance, said spokesman Michael Kinane. All are well, and for now will continue studying there. Some colleges around the United States, including Syracuse University and New York University, have brought back their students from overseas studies in countries including China, Japan, South Korea and Italy.

SUNY Old Westbury also has five students from China studying at its Long Island campus. They have been monitored since they returned from their homeland in January, and show no symptoms, Kinane said.

“In the interest of caution,” the college has canceled a summer 2020 study abroad program at Wuyi University in China, he said.

Adelphi University also has students from China, but 12 were stuck in their homeland after traveling there for winter break and were unable to return because of a travel ban, spokesman Todd Wilson said.

At St. Anthony’s High School in South Huntington, international students hail from 16 countries, including China. The school is looking into study and travel options for them this summer if they cannot return to their homelands, spokeswoman Christina Buehler said.

Some high schools on Long Island have trips planned to Europe for spring break, but are debating what to do. In April, a group from the Comsewogue School District is supposed to head to Spain, where several cases of coronavirus have been reported. School officials said they expect the topic to be taken up at a Board of Education meeting on Monday.

Travel agents on Long Island feel under siege. They don’t want to put anyone in harm’s way. But they also don’t want people to overreact.

Liz Harnos of Burr Travel said she reminds many customers that they take daily risks without much of a second thought.

“I tell them you could choke on a ham sandwich. But you’re still going to eat lunch,” she said. “Go see the world. Don’t let people scare you out of it.”

“We have people who bungee jump in Costa Rica,” she added. “What’s worse than that?”

Her agency has no one traveling to China, but she is urging people to see how the situation develops elsewhere.

“I am telling people to wait and see. Don’t just go up and cancel this dream trip you have been planning for two years with your family to Italy or Hawaii,” she said.

While China is an important destination for many customers, Italy is huge, agents said.

“Italy is always our number one” in Europe, said Greg DeClemente of Courtyard Travel in Great Neck. “When it comes to leisure travel, honeymoons, that kind of thing, Italy is pretty much at the top.”

The agency’s owner, Sheila Yellin, said many clients have not yet canceled their trips to Italy, and that agents have to put on a strong face. “We’re just feeling like we can’t just be down,” she said. “We have to show a positive kind of response.”

Jeaneane De Cicco of Rogers Travel in Patchogue said tamping down what she considers in some cases to be hysteria is not always easy.

Tips if you have travel plans overseas

NY seeking in-state coronavirus tests, as monitored LI cases fallBoth Nassau and Suffolk health departments said they have received complete cooperation from those asked to isolate themselves. None have exhibited symptoms of the virus. LI biotech firm racing to produce coronavirus vaccineFarmingdale-based Codagenix could have trial vaccines ready for safety testing on human volunteers by May, an executive said.  Experts: How to protect yourself from coronavirusThere are no confirmed cases in New York State, but officials from the U.S. Centers for Disease Control and Prevention have urged everyone to take precautions and prepare. Coronavirus: How can you protect yourself?How does coronavirus spread? Local medical experts answer commonly asked questions about the virus, also known as 2019-nCoV.