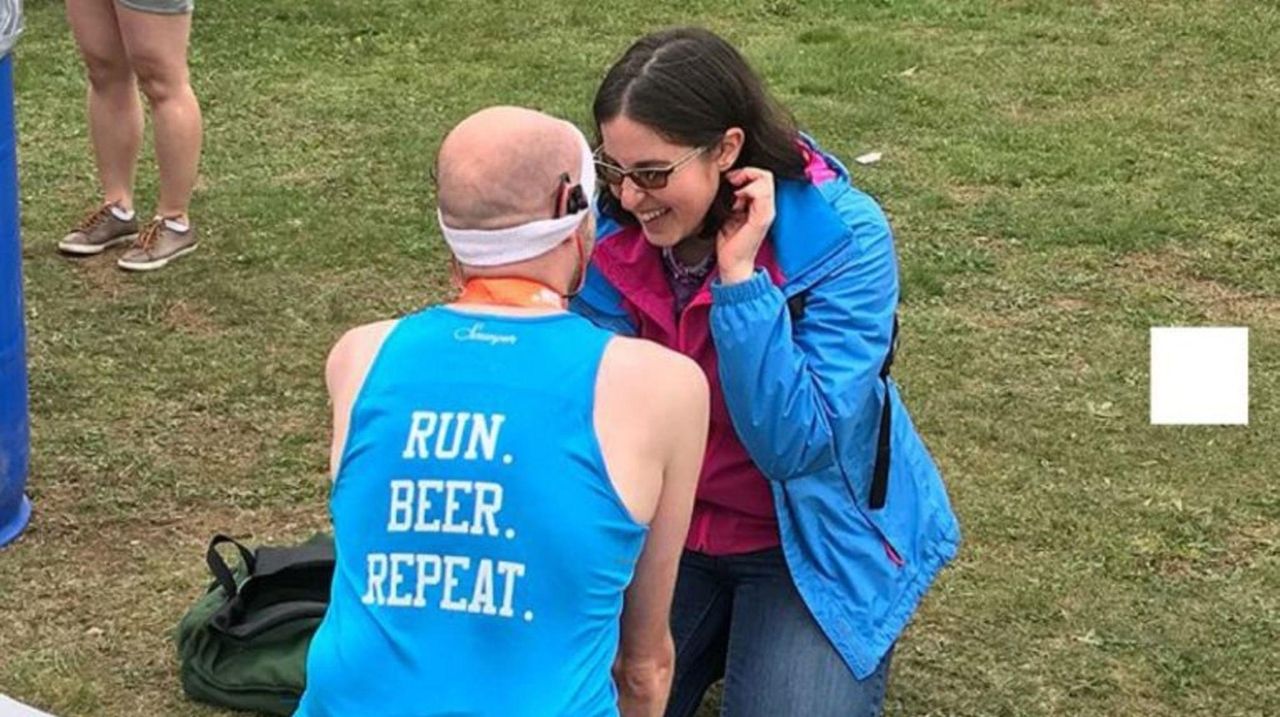 Jill Mahon thought her boyfriend Dave Ludin might have had something up his sleeve at the Long Island Marathon Sunday when she heard that all four of their parents would be coming into town to watch as he ran in his first marathon. Then, moments after a breathless Ludin crossed the finish line, he presented her with a handmade gold ring he had made using a 50 euro coin the couple got on a recent trip to Venice and crafted its box from the branch of a tree near their Patchogue home. Credit: Craig Saint Denis

Jill Mahon thought her boyfriend Dave Ludin might have had something up his sleeve when she heard that all four of their parents would be coming into town to watch as he ran in his first marathon.

Her suspicions were confirmed when moments after a breathless Ludin crossed the finish line, he presented her with a handmade gold ring.

“The second he crossed the finish line, he immediately got down on one knee with a ring he made and asked if I would marry-thon him,” she said.

Ludin made the ring himself using a 50 cent euro coin the couple got on a recent trip to Venice and crafted its box from the branch of a tree in a wooded area near their Patchogue home.

The couple said they met online. Mahon, 31, is a resident psychiatrist at Stony Brook University Medical Center and Ludin, 32, is a Suffolk County worker. They have traveled the world together, including a visit to Machu Picchu in Peru and a scuba diving trip in Zanzibar.

“If she said yes to me like this . . . ” Ludin said, gesturing to his sweaty post-race appearance as he cooled down after the race. Mahon admitted tearing up a bit, even if the proposal wasn’t totally unexpected.

Ludin’s mother, Alane Dashner, had a diamond heart necklace waiting to give her new daughter-in-law. “My mother gave it to me, and now I can give it to my daughter,” she said. The proposal took place with a half-dozen of the couple’s friends and their parents waiting nearby, including Mahon’s mom Karen and father Mike who traveled from Davenport, Florida, and Buffalo.

“I am elated,” Karen Mahon said. “We love Dave and feel they are a perfect match for each other.”

When asked if they had set a wedding date, Jill Mahon just laughed.

Ex-Long Islander, SBU professor win marathonThe race represented a bit of redemption for former Miller Place resident Thomas Rammelkamp, who had to pull out of the Boston Marathon earlier this year with a case of hypothermia. The women's winner was Patchogue's Gabrielle Russo, an assistant professor of anthropology at Stony Brook University. Search LI Marathon, more race results Look up finish times for runners in the Long Island Marathon along with the half, 10K, 5K and 1-mile races. LI Marathon ends with cheers, beersCheryl Donald was 32 seconds too late in her quest to run the Kentucky Derby ...