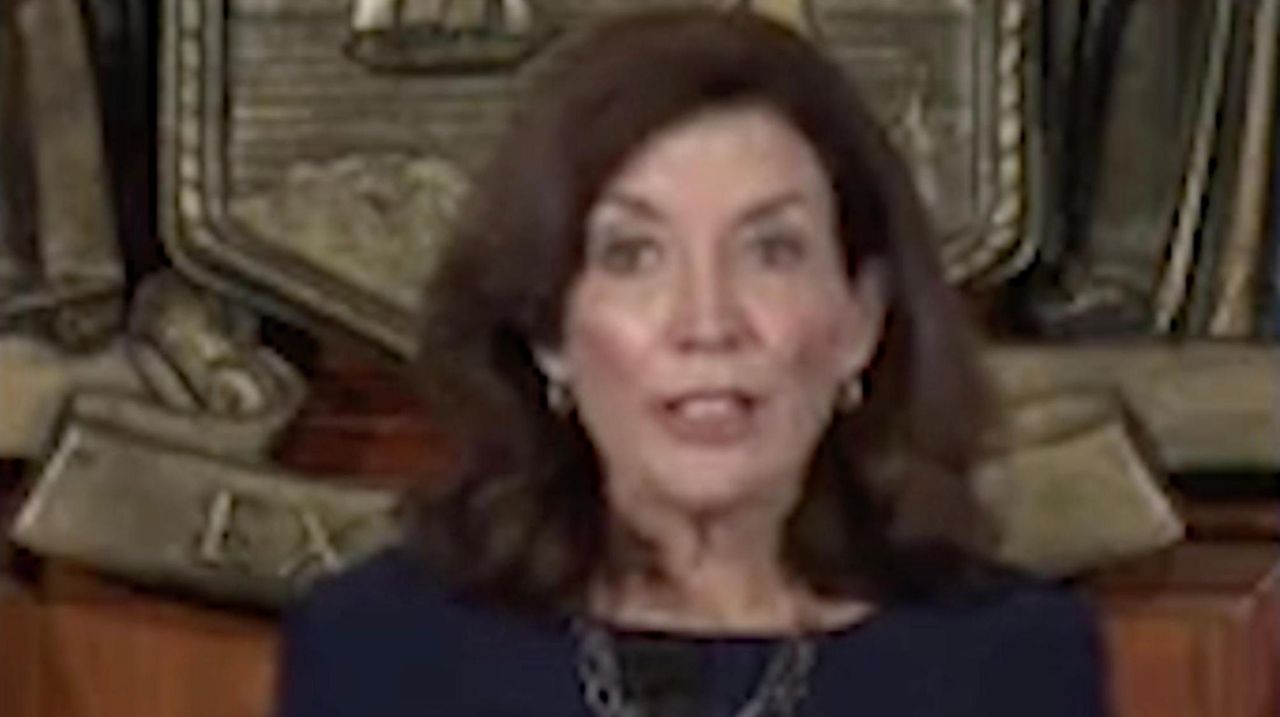 Nassau County registered 438 new cases in test results from Tuesday, while Suffolk logged 525, for a total of 963. Suffolk also registered four deaths from the virus on Tuesday, among 31 fatalities statewide.

The governor pointed to Long Island as one of several areas of concern around the state as the delta variant causes a surge in infections and deaths, and ordered new mandates for mask wearing at state-regulated child care facilities, residential congregate programs and other locations.

"I’m not aware of a sanctioned religious exemption from any organized religion. In fact, they are encouraging the opposite," she said at a news briefing Wednesday. "They’re encouraging their members. Everybody, from the pope on down, is encouraging people to get vaccinated."

Hochul continued: "We are going to make sure that we defend the right of the state of New York to ensure that" any patients in a health care facility do "not have to worry when they go in there for health care that they’re going to contract a virus from one of the people that are supposed to protect their health. That doesn’t make sense, and we are going to continue to go to court."

The state’s mandate that health care workers must be vaccinated against COVID-19 — to take effect Sept. 27 — is facing several court challenges.

On Tuesday, a federal judge upstate said the state must allow a religious exemption to its coronavirus vaccine mandate for health care workers, at least temporarily, suspending a rule providing no exemptions.

The order, issued by Judge David N. Hurd of the U.S. District Court for the Northern District of New York in Utica, contrasts with one Sunday by a federal judge in Brooklyn, who refused to issue any suspension of the state's mandate.

In that case, which makes similar arguments to the one considered by Hurd, two Syosset Hospital nurses are objecting to the shots on religious-freedom grounds guaranteed by the First Amendment. The plaintiffs in the Syosset Hospital case are appealing to the U.S. Court of Appeals for the Second Circuit, whose jurisdiction includes all of the state.

Hurd's partial suspension, a temporary restraining order that applies statewide, lasts until at least Sept. 28, when he is to hear oral arguments. It does not, "as a practical matter," go into effect until Sept. 27, when health care workers must have gotten at least one vaccine dose as a condition of employment, he noted in the order.

The plaintiffs want Hurd to go a step further and issue an injunction blocking the mandate until the case is resolved, according to court filings.

According to the union, the case was brought by the Municipal Labor Committee, an umbrella organization, and the order issued by New York State Supreme Court Judge Laurence Love.

"We’re very, very confident in our legal position, so we’re just continuing to build the framework for full implementation on the 27th," de Blasio said.

The fact is there is a pandemic and the federal government has imposed a similar mandate, although it includes a testing option the city’s mandate lacks, he said.

"We’re employers. We have the right to keep our workforce safe and healthy. We feel all those factors make it very clear the correctness of our position," de Blasio said.

Meanwhile, as the delta variant spreads, Hochul listed several areas of the state — including Long Island — where case numbers are high and officials are watching.

"Individual areas we are concerned about" include the North Country, Western New York, the Finger Lakes, the Capitol Region and Long Island, Hochul said.

The state is talking with leaders in those areas and offering help, she said.

"Let’s see if we can continue to drive those numbers down in terms of our positivity rates," she said.

Long Island’s seven-day average for positivity in testing for COVID-19 has hovered around 4.2% the last several days. The number of new confirmed cases has come close to 1,000 on several recent days.

Hochul said "breakthrough infections" — people who are vaccinated but still get infected with COVID-19 — were rare.

"That is a false narrative," she said. "It’s been spun around on social media. We need to shut that down."

She said the "MU" variant is relatively rare — about 0.5% of new cases.

She warned that New York faces a potentially difficult time with the virus as holidays, including Halloween and Thanksgiving — and right into December and then the Super Bowl — approach, with many social gatherings.

"We have a vulnerable time coming forward. I’m sending out the alarm right now," she said, urging people to get vaccinated. If they don’t and they get sick, "it is not going to be fun to spend the winter on a ventilator."

See what percentage of people around you are fully vaccinatedSee vaccination rates by ZIP code, and more COVID-19 data. COVID-19 indicators dip on LI, as NYC takes major reopening stepsThe total number of new cases on Long Island and the seven-day positivity rate declined in test results on Sunday, as 1 million public school students went back to class in New York City and the city began enforcing rules requiring proof of vaccination for patrons of indoor venues.