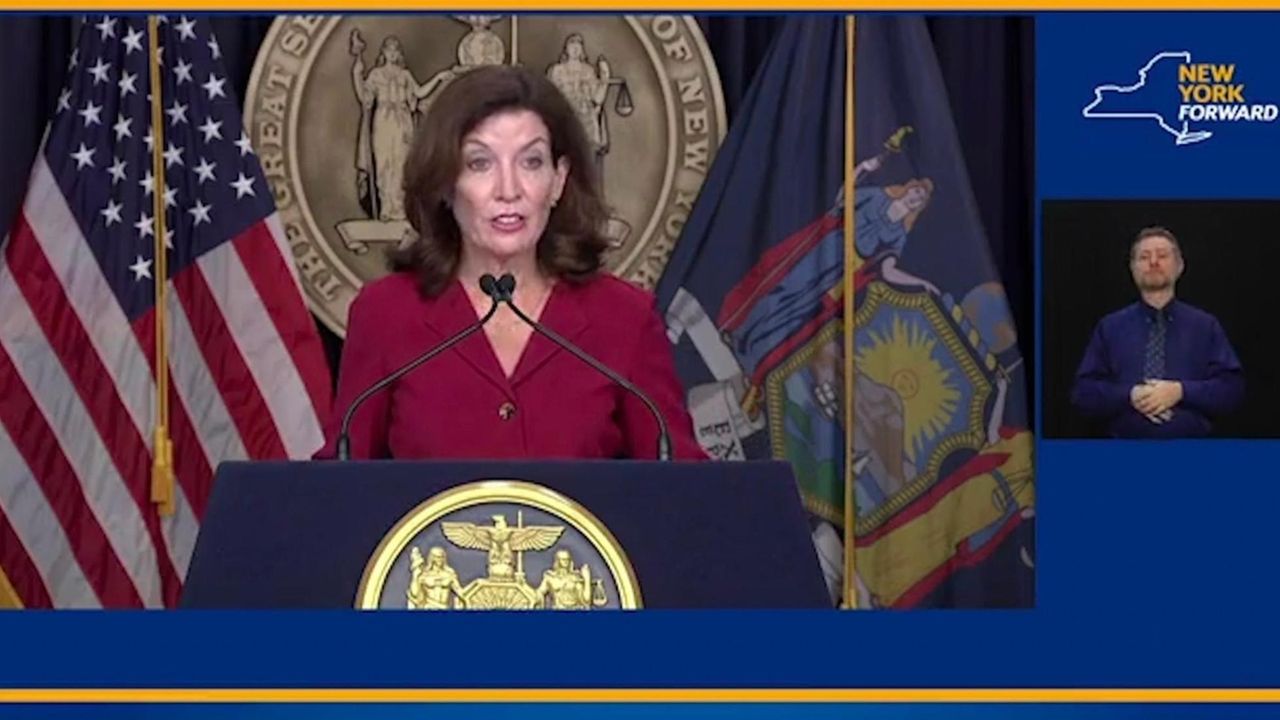 ALBANY — Dr. Howard Zucker, who helped lead New York state through the worst of the COVID-19 pandemic but was criticized for his role in nursing home policies, will resign after more than seven years as state health commissioner.

But he came under fire over the past year for supporting Gov. Andrew M. Cuomo’s handling of nursing home deaths and pushing homes to take COVID patients.

"Dr. Zucker has submitted his resignation as commissioner of health," Gov. Kathy Hochul said Thursday at a news conference.

"I think I made it clear, I am looking to build a new team," Hochul said, less than a month after she succeeded Cuomo, who resigned amid sexual harassment allegations.

Zucker will remain on the job until Hochul chooses a replacement. It was unclear from state officials if there is any front-runner.

Zucker’s statewide and national stature grew in the spring and summer of 2020 while, at Cuomo’s side, he helped explain the medical reasons for social distancing, masks, testing for COVID-19 and the need for New Yorkers to be vaccinated. But Zucker also was criticized for supporting Cuomo when he and the governor issued guidance in March 2020 to nursing homes to accept COVID-19 patients. More public criticism came after Cuomo delayed release of complete figures on the number of deaths among nursing home residents.

"With any change in leadership, its natural for the leader to want to have their own cabinet and their own people," Robinson said.

"I do get the hesitation some might have with changing the health commissioner when cases are still rising and we are dealing with the variant," she said, but "because of the questions that have come with Governor Cuomo and the undercounting and some of the policies in the nursing homes, there was always going to be a cloud of doubt with his leadership going forward."

The New York State Medical Society thanked Zucker "for his many years of service as he worked to protect the residents of New York state, especially as he helped to lead the state’s response to the COVID-19 pandemic — one of the most challenging public health threats of our lifetimes," said Dr. Joseph R. Sellers, president of the physicians group.

Zucker, 62, is the latest top Cuomo official among about 20 so far who have resigned or been terminated since Hochul took office. They include Joe Rabito, a longtime Cuomo hand who had recently been appointed head of the state Environmental Facilities Corp., and Linda Lacewell, another longtime Cuomo adviser who resigned as head of the state Department of Financial Services.

In his letter of resignation dated Thursday, Zucker said it is "time when the baton should be passed in this marathon journey."

"Though we continue to address new quagmires related to the pandemic, from issues of booster shots to legal challenges regarding vaccine mandates, I believe that in our particular state the most difficult aspects of this may be behind us," Zucker wrote. "The one important unresolved aspect is the need for pediatric vaccinations which I see happening in the near future."

Zucker had been under pressure to resign from Democrats and Republicans. Legislators and many relatives of nursing home residents blamed the March 25, 2020, memo for introducing the virus into nursing homes.

A January report by state Attorney General Letitia James found that "at least 4,000 nursing home residents died after (Department of Health’s) March 25 Guidance on Admission Practices." The guidance stated: "No resident shall be denied readmission or admission to a nursing home solely based on a confirmed or suspected diagnosis of COVID-19." Cuomo had said the virus was already in nursing homes at that time and the transfers were needed to free up dwindling hospital capacity. The guidance was later rescinded.

The attorney general’s report stated that, based on a spot check, Cuomo’s public tally of deaths of residents in nursing homes may have been undercounted by as much as 50%. The Health Department then added 3,800 deaths to the total mortality of residents from the virus pushing the total to more than 15,000.

The U.S. Justice Department has been investigating the tally of deaths of nursing home residents.

"Dr. Zucker’s ability to serve as the commissioner of health was hindered beyond repair by his decisions allowing the agency he led on behalf of the people of New York to become a political tool for Cuomo and his allies," said state Senate Health Committee chairman Gustavo Rivera (D-Bronx).

Judge extends ban on state vaccine mandate enforcementThe order doesn't preclude employers setting mandates from acting on their own to accept or reject claims for religious exemptions from unvaccinated health care workers, legal experts say. LI COVID-19 cases up, 7-day average dips, state saysNassau logged 339 new cases, while Suffolk had 454, for a total of 793, according to the latest New York State data. The seven-day average for positive COVID-19 tests on Long Island fell slightly from 3.80% to 3.68%.

Tierney, Sini battle over who'll be toughest on crime
A 'country atmosphere' in Muttontown, with privacy and nearby shopping
Babylon Rental Review Board gives itself high marks, as do residents
Gabby Petito's parents speak out on Australian TV
1:03
45,000 strong: Jones Beach crowd walks to fight breast cancer
1:24
Music hall fundraiser held for Gabby Petito Foundation
Didn’t find what you were looking for?