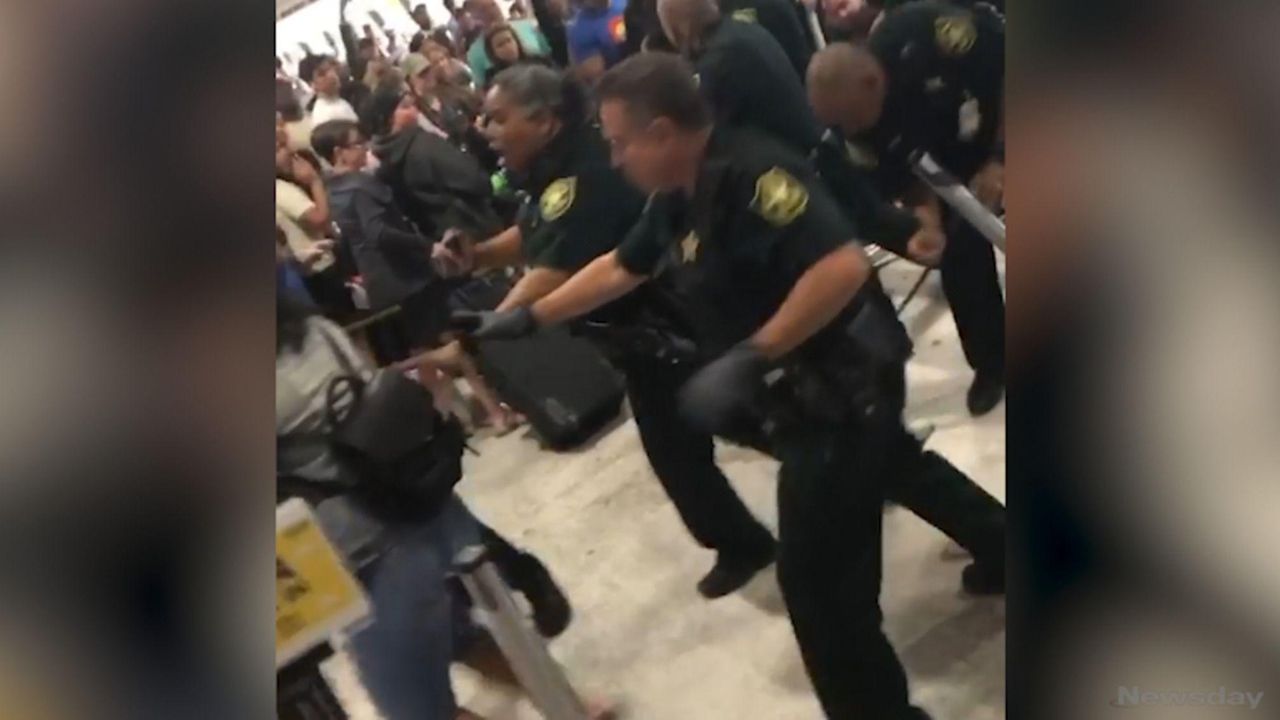 On Monday night, May 8, 2017, three Long Islanders, including a brother and sister, almost caused a riot at Fort Lauderdale's crowded airport and threatened airport employees, officials said. The suspects were arrested on charges of inciting or encouraging a riot, disorderly conduct, resisting arrest and trespassing, the Broward County sheriff's office said Tuesday, May 9, 2017. Credit: Handout

Three Long Islanders were charged with nearly causing a riot at Fort Lauderdale’s airport after Spirit Airlines canceled multiple flights and the ensuing melee was captured on social media.

The trio from Long Island — Desmond Waul, Jr., 22, of Selden; his sister, Janice Waul, 24, of Brentwood; and Devante Garrett, 22, also of Brentwood — were arrested and charged with, among other crimes, inciting or encouraging a riot, according to the Broward County Sheriff’s Office.

They have been released on bail, according to the sheriff’s office. Efforts to reach Garrett on Tuesday were unsuccessful. Waul and his sister, reached on their cellphones, declined to comment.

“We’ll get back to you with our attorney,” Janice Waul said.

Spirit is the latest commercial airline caught in the social media crosshairs.

A video taken at the airport Monday and posted to social media showed a gaggle of people yelling, cursing and shoving as sheriff deputies tried to break up the fight. At one point in the video, a sheriff’s deputy, who was attempting to restrain a woman in a peach-colored dress, was pushed to the ground.

As both fell, they knocked down the stanchions that were used to hold the lines.

The deputy sheriff who detained the Long Island travelers said their behavior “caused the crowd of approximately 500 people to become enraged, fearful or visually upset,” according to the criminal complaints.

“The atmosphere which [Desmond] Waul and co-defendants caused was one that resembled the start of a riot,” the deputy sheriff, Peter Sepot, wrote in the criminal complaints.

The most recent episode of violence captured on cellphone video Monday again showed how turbulent air travel has become.

On April 9, Dr. David Dao, a United Airlines passenger, was dragged from his seat on a overbooked flight from Chicago to Louisville because he refused to give it up. United had picked Dao and three other passengers to be removed from the plane so airline employees could travel.

The incident, recorded on passengers’ cellphones, showed the bloodied and injured Dao being dragged down the aisle by his legs and arms by the three aviation security officers.

On Monday, 30 Spirit Airlines flights were delayed at the airport in addition to the 11 canceled, according to FlightAware, a flight-tracking site.

The cancellations were reportedly the result of labor dispute between the budget airline and its pilots.

Spirit Airlines on Monday sued Air Line Pilots Association International, the union representing the pilots, accusing the organization of coordinating “pervasive illegal work slowdown.” Spirit said the slowdown had led to the cancellations of about 300 flights this month and had disrupted travel plans of more than 20,000 passengers. The pilots union said it’s not engaging in any job action.

Paul Berry, Spirit Airlines’ spokesman, on Tuesday blamed the pilots for the disturbance caused by the flight cancellations and delays in Florida and elsewhere.

“We sincerely apologize to our customers for the disruption and inconveniences they have suffered. We believe this is the result of intimidation tactics by a limited number of our pilots affecting the behavior of the larger group,” Berry said in a statement. “We are also shocked and saddened by the events that took place yesterday at Ft. Lauderdale/Hollywood International Airport and at other airports across our network.”

However, Douglas Kidd, executive director of the National Association of Airline Passengers, an advocacy group, said Spirit Airlines should have offered its passengers meal vouchers while they waited and hotel vouchers for those who needed to stay overnight.

Calling the cops, Kidd said, is not the answer.

“They should deal with their customers in a manner that cuts down friction rather than makes matter worse,” he said.

Total delays within, into, or out of the U.S. Tuesday:

Total cancellations within, into, or out of the U.S. Tuesday: