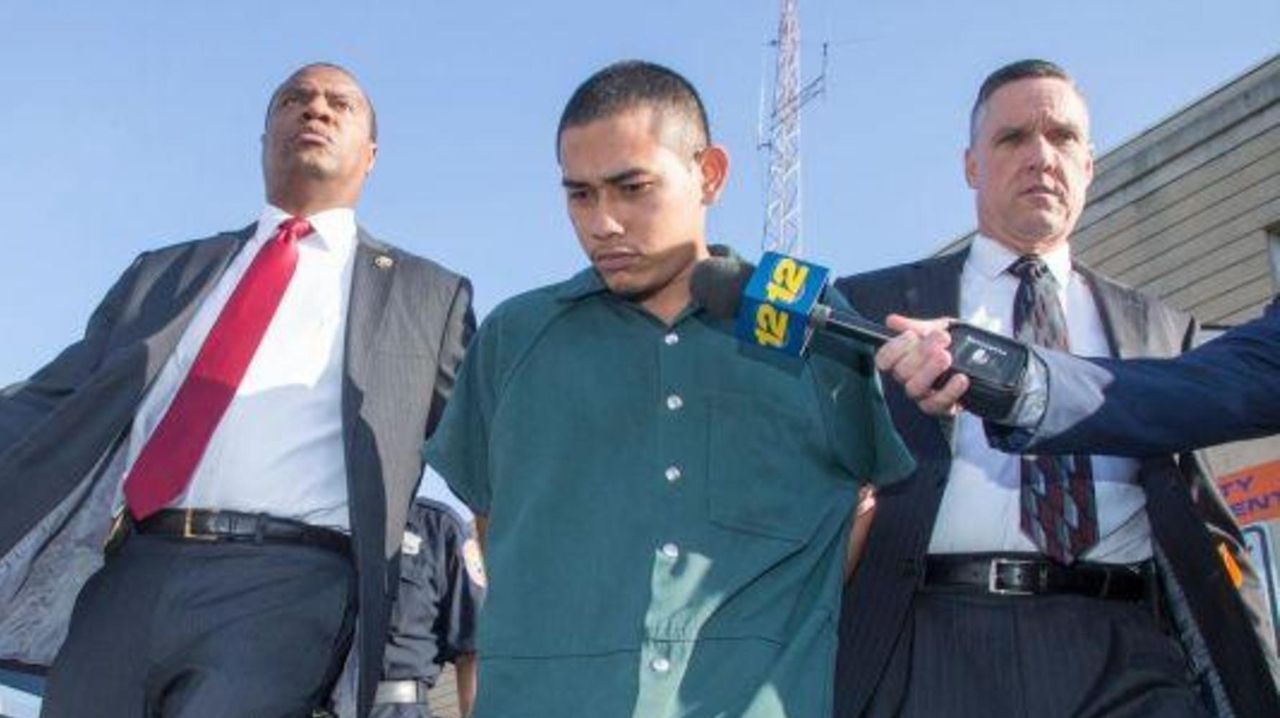 An alleged gang member charged in an initiation killing of a man found in the Massapequa Preserve defiantly flashed gang signs and shouted "MS-13!" before being arraigned Saturday, Oct. 7, 2017. Antonio Cullal, 23, originally of Hempstead, is the fourth person charged in the March slaying of Julio Cesar Gonzales-Espantzay, 19, of Valley Stream. Credit: Jim Staubitser

An alleged gang member charged in an initiation killing of a man found in the Massapequa Preserve defiantly flashed gang signs and shouted “MS-13!” before being arraigned Saturday.

Antonio Cullal, 23, originally of Hempstead, is the fourth person charged in the March slaying of Julio Cesar Gonzales-Espantzay, 19, of Valley Stream.

Homicide detectives said Cullal befriended Espantzay and lured him into the woods at the preserve with promises of meeting a woman. Instead, detectives said, Cullal and others “hacked to death with machetes.”

Cullal pleaded not guilty at First District Court in Hempstead and was ordered held without bail.

During a news conference Saturday morning at Nassau police headquarters in Mineola, Det. Lt. Stephen Fitzpatrick said Cullal also held up gang signs in a police car after being arrested.

“The killing was committed for the purpose of moving up in MS-13,” Fitzpatrick said. “The motivation was status. ... They had to prove themselves and this unfortunate young man was just someone they were going to move up on.”

Fitzpatrick, commanding officer of the Homicide Squad, said Cullal was brought back to Long Island on Friday and that authorities are “looking into other possible suspects.”

Authorities said Cullal was an undocumented immigrant from an unspecified country of origin. He had previously been deported and re-entered the country illegally.

He was working a construction job in Maryland, where he was living with a woman and caring for her two children, ages 11 and 7, authorities said.

According to court papers, Gonzales-Espantzay, who police said was not involved in any gang, was hacked and shot multiple times after being lured into the woods on the promise of sex with another suspect — Laura Christina Campos, 28, of Bladensburg, Maryland.

The victim’s body was discovered near Seaview and Ocean avenues shortly after 2 p.m. on March 23 by a man walking his dog in the preserve, police said.

A court-appointed attorney said Cullal intended to testify before a grand jury but declined further comment.

Others charged earlier in connection with the killing are Carlos Portillo, 22, of Hempstead, and Kevin Granados-Coreas, 19, of Rosedale, Queens.

Long Island law enforcement authorities have targeted gang violence since the bodies of two teenage girls were discovered last September in Brentwood after police said they were killed by MS-13 members.

Months later, the gang beat and mutilated four young men in a Central Islip park, according to police.

Judith Bender, longtime reporter, editor at Newsday, dies at 87
NY now one of 18 states with half of adults fully vaccinated against COVID-19
3:19
No criminal charges for many drivers in crashes that kill pedestrians, bicyclists
1:19
Students organize rally against anti-Asian crimes
Pride parade organizers ban cops from marching in uniform
1:25
Doctors disagree on whether Cuomo's decision to lift restrictions is wise
Didn’t find what you were looking for?