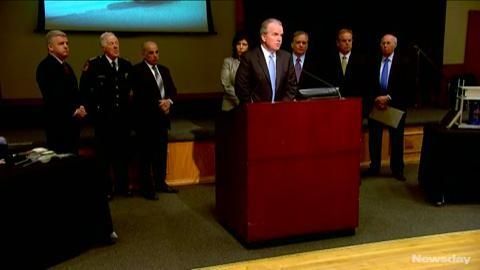 Authorities have arrested seven men in connection with a large heroin distribution network in the South Shore communities of Merrick, Massapequa, Seaford and Wantagh, police said on April 25, 2016. Acting Nassau Police Commissioner Thomas Krumpter said the arrests involved about 2 kilograms of cocaine and 3,250 packets of heroin, and that the drugs had an estimated a street value of $750,000. (Credit: News 12 Long Island)

Authorities have charged seven men — including a father and two sons who are alleged to be members of the Latin Kings street gang — in connection with a “significant” heroin and cocaine distribution network selling drugs in the South Shore communities of Merrick, Massapequa, Seaford and Wantagh, police said Monday.

Nassau police, the Nassau County district attorney’s office and the federal Drug Enforcement Agency conducted the investigation and the suspects were arrested between Wednesday and Saturday, after authorities got a tip and then wiretapped one of the defendants’ phone, police said at a news conference Monday.

Acting Nassau Police Commissioner Thomas Krumpter said the arrests netted about 3 kilograms of cocaine and 3,500 packets of heroin, with an estimated street value of $750,000. The police also seized about $26,000 in cash and two vehicles — a 2008 Toyota Avalon and a 2015 Mercedes SUV — belonging to two of the suspects.

“This is clearly an epidemic, clearly killing our youth,” said Krumpter. “These people are major suppliers of heroin in the community ... they are significant drug traffickers.”

So far this year in Nassau County, there have been 250 nonfatal and 45 fatal heroin overdoses, Krumpter said. A record 442 people died of opiate overdoses, including heroin, on Long Island in 2015 — up from 403 the previous year.

County Executive Edward Mangano said the arrests represented “an important win” on the heroin war and “disrupts a significant distribution of heroin and cocaine that begins in the Bronx and ends with being distributed on the South Shore of Long Island.”

Authorities alleged that Ramirez received the drugs from a supplier, which police did not reveal, and Jones ferried the drugs from the Bronx to Long Island in his Toyota Avalon, outfitted with secret compartments to hide the drugs. The Mercedes SUV belonged to Ramirez, police said.

Ramirez was ordered held without bail and Jones was held on $475,000 bond, according to the district attorney’s office.

Reynaldo A. Arias, 58, also of East Olive Street in Long Beach, was arrested on Saturday along with his son, Jesse Arias, 37, who lives at the same address.

Reynaldo and another son, Sean Arias, 28, of Maeder Avenue in Merrick, were both charged with drug possession and conspiracy charges. Jesse Arias was charged with conspiracy.

Both Sean Arias and Jesse Arias are members of the Latin Kings street gang, Krumpter said.

William E. Johnson, 61, of E. Broadway in Long Beach, was arrested Saturday and charged with criminal possession of a controlled substance and criminal facilitation, police said.

Robert G. Baumberger, 26, of Grand Avenue in Merrick, was arrested Friday and charged with criminal possession of a controlled substance and conspiracy.

Attorneys for the suspects could not immediately be reached for comment.