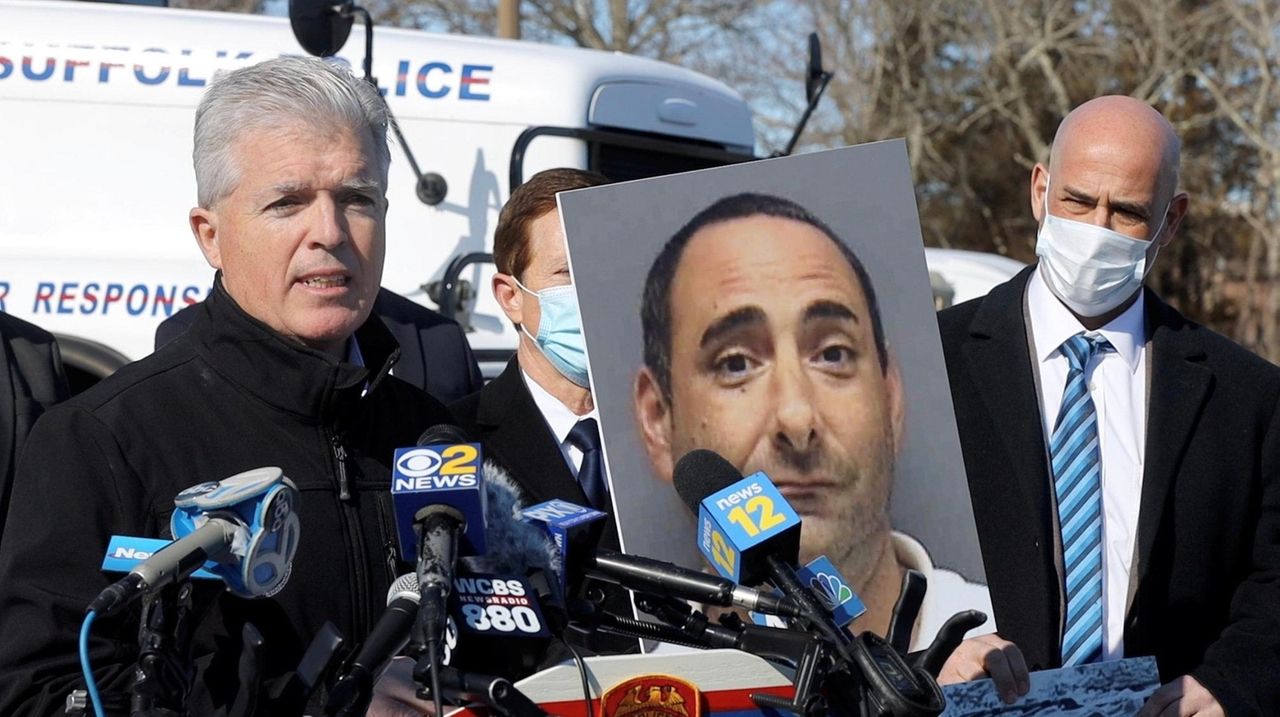 A Bay Shore man is facing multiple charges, including kidnapping, after Suffolk police say he impersonated a cop and convinced two teenage girls to get in his SUV before kidnapping one of them who later escaped. Newsday's Cecilia Dowd has more. Credit: Howard Schnapp, Barry Sloan

The quick-thinking actions of two "brave" teenage girls, a crossing guard and a Lindenhurst resident led to the Thursday arrest of a Bay Shore man charged with kidnapping one of the teens after saying he was a cop, Suffolk police said.

Hart, who described the case as "disturbing and frightening," said information from witnesses about a white Nissan Xterra with "distinctive stickers" allegedly used in the Wednesday afternoon abduction led police to the SUV's owner and then to Cristiano.

Suffolk County Executive Steve Bellone, himself the father of a boy and two girls, one 13, joined Hart at the news conference and called the allegations "sickening."

"It is beyond disturbing … this is every parent's nightmare," Bellone said.

Cristiano faces two counts of second-degree kidnapping, two counts of endangering the welfare of a child, one count of first-degree criminal impersonation, and one count of luring a child. He was being held at the Suffolk police First Precinct in West Bablyon. Cristiano is scheduled for arraignment Friday in First District Court in Central Islip.

It was not immediately known if he was represented by an attorney.

Police said Cristiano, driving the SUV, spotted the girls, 14 and 16, about 3:35 p.m. Wednesday on Herbert Avenue as they walked to the nearby Lindenhurst Memorial Library. Bellone said Cristiano identified himself to the teens as a police officer, telling them he was "investigating gang activity" in the area — and they weren't safe. He then told the girls he'd drive them to the library, police said.

The girls accepted the offer and when they arrived at the library, Cristiano told the older teen to get out of the SUV so he could talk to the 14-year-old, police said.

Cristiano then drove off with the younger girl to nearby Fireman's Memorial Park, where he grabbed her "pants and waist" and made "inappropriate" comments, Hart said. She fought back, the police commissioner said, grabbing a door handle and kicking it open and escaping. She ran to a house nearby seeking help and a resident called police.

On Thursday, Lindenhurst School District Superintendent Daniel Giordano sent a letter to the school community about what he described as "a deeply troubling incident."

"This situation is especially upsetting given the fact that the students put their trust in someone who said he was a police officer," Giordano said. Children should be taught to know the difference between uniformed officers in marked cars and police in plain clothes in unmarked cars, he said. If the person doesn't have a badge, the superintendent continued, "they should be treated as a stranger."

Mary Ann Raarup, who has lived in the Lindenhurst neighborhood near where the incident took place for more than 30 years, said there hadn't been a similar episode in the area in a long time.

"I was quite surprised, but it happens in every neighborhood, unfortunately," she said. "But it's unfortunate that the children can't feel safe walking in their own neighborhood."

She added: "You teach your children to trust the police and the fire department."

"It's a terrible thing," DiSalvo said of the kidnapping allegation. "I see all the young kids … they're always in a group. They should always be in a group, and I hope this doesn't really hurt the police at all."