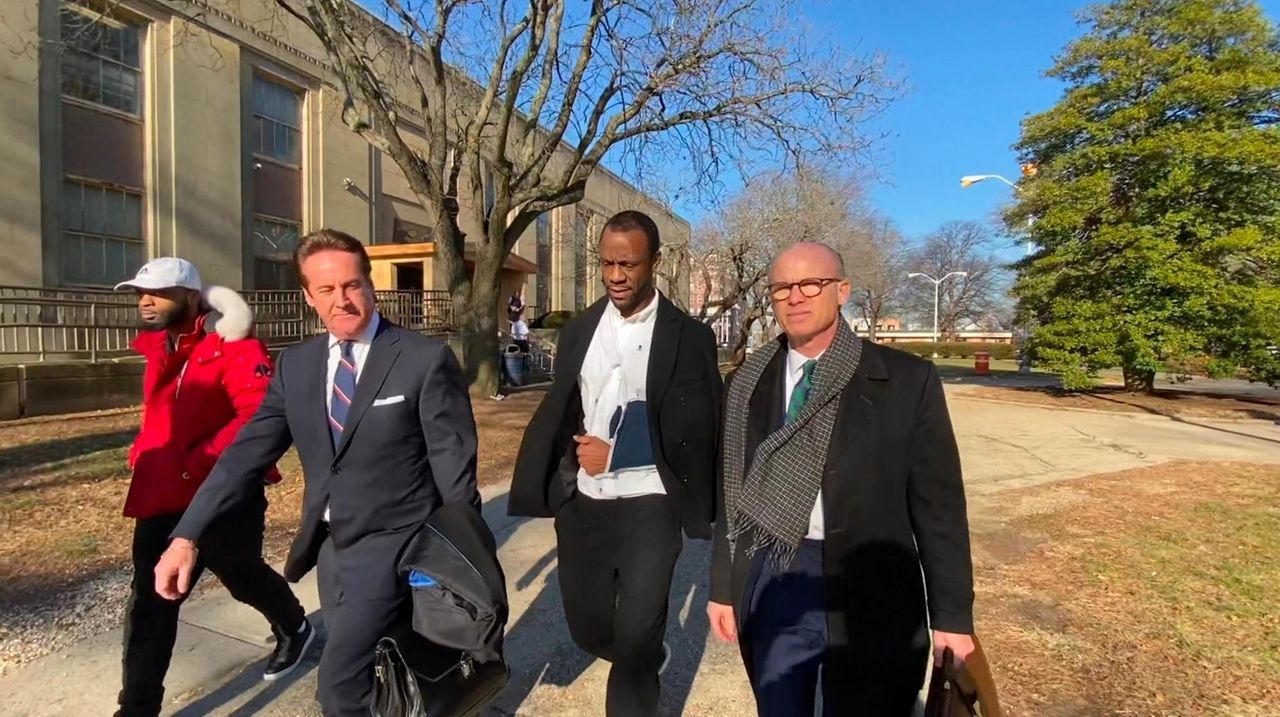 A Nassau County judge on Monday ruled that the case against Akbar Rogers, the Freeport man whose controversial police arrest was captured on cellphone video, can be turned over to a grand jury.

Manhattan-based attorney Randy Zelin made the request to Judge Anthony W. Paradiso in Nassau County Court in Mineola on Monday morning. The Nassau district attorney's office, which also is investigating the arrest because of accusations of police misconduct, would have to take the case before a grand jury. No time frame was set.

Rogers’ arrest Dec. 3 was captured by a neighbor on a cellphone video that went viral. The video showed eight officers involved in the arrest, with at least two appearing to punch the suspect while he was on the ground yelling for help. Another officer appeared to kick Rogers, 44, who was pulled over a chain-link fence and eventually pinned to the ground behind a home on East Seaman Avenue. A total of 10 officers appear in the video.

Rogers faces a resisting arrest and second-degree assault charge stemming from his arrest. Zelin wants those charges before a grand jury in hopes of the case being dismissed.

“Today, we defy these police officers and we invite these officers to walk into a grand jury room, raise their right hands and say they were lawfully executing an arrest,” Zelin said after the court hearing, standing next to Rogers. “What they were doing was pulverizing and executing my client. This was an unlawful arrest.

“The way this man was treated was beyond abominable. It was horrifying and jaw-dropping.”

Attorney William Petrillo, who is representing the police officers, said in a statement Monday that “the only thing horrifying is the effort to take a perfectly lawful arrest of a man clearly ignoring repeated commands to stop resisting, and distort it into something that it’s not. The police did nothing wrong, appropriate force was used to restrain the violently struggling individual, and the video supports this truth.”

Petrillo of Garden City wouldn’t elaborate on his comments and declined to answer further questions.

On Monday morning, a couple of protesters stood outside the courthouse calling for justice.

“No Justice, no peace. No racist police. Justice for Akbar,” the protesters yelled.

“I came out because I don’t like what they did to my friend Akbar. I came out to support those who have been put into the prison system unfairly. I came out to speak against racism and police brutality,” said Felita Jones, 46, of Freeport.

Rogers, wearing a white collared shirt and black jacket, attended the hearing but did not speak.

Officers came to arrest Rogers on a warrant for a traffic charge, as well as a separate incident in which he allegedly pushed a woman to the ground twice, police said. He led them on a 100-mph vehicle chase in November, police said. Those charges are pending as well.

The officers involved in his arrest, including the son of Freeport Village Mayor Robert Kennedy, remain on duty. Kennedy turned the investigation over to the Nassau district attorney.

The video has sparked outrage from some Long Island residents and activists, particularly because the officers appear to be mostly white, while the suspect is black. Police also used a stun gun on Rogers.

“I have to advocate for a change in the system. Something has to be done. These cops are framing people and they are arresting people,” protester Justise Jones, 38, of Freeport, said outside the courtroom.

Audio excerpts from the arrest of Akbar Rogers of Freeport on Dec. 3, as recorded by one of Rogers’ neighbors on East Seaman Avenue.

Officer: “We need assistance in the backyard.”

Rogers: “I’m getting up, officer.”

Neighbor recording arrest: “Why you punching him like that? Why you hitting him?”

Officer: “Raise your ... [expletive] behind your back.”

Neighbor recording arrest: “They beating him and tasing him. It’s five of them on one person.”

Anger, shock in Freeport: 'He got beat up pretty bad'Many criticized tactics used by police in the arrest of Akbar Rogers, but others said relations with local officers have not been bad. Curran, mayor call for probe of Freeport arrestA video of the altercation between village police and the suspect was shared widely on social media.