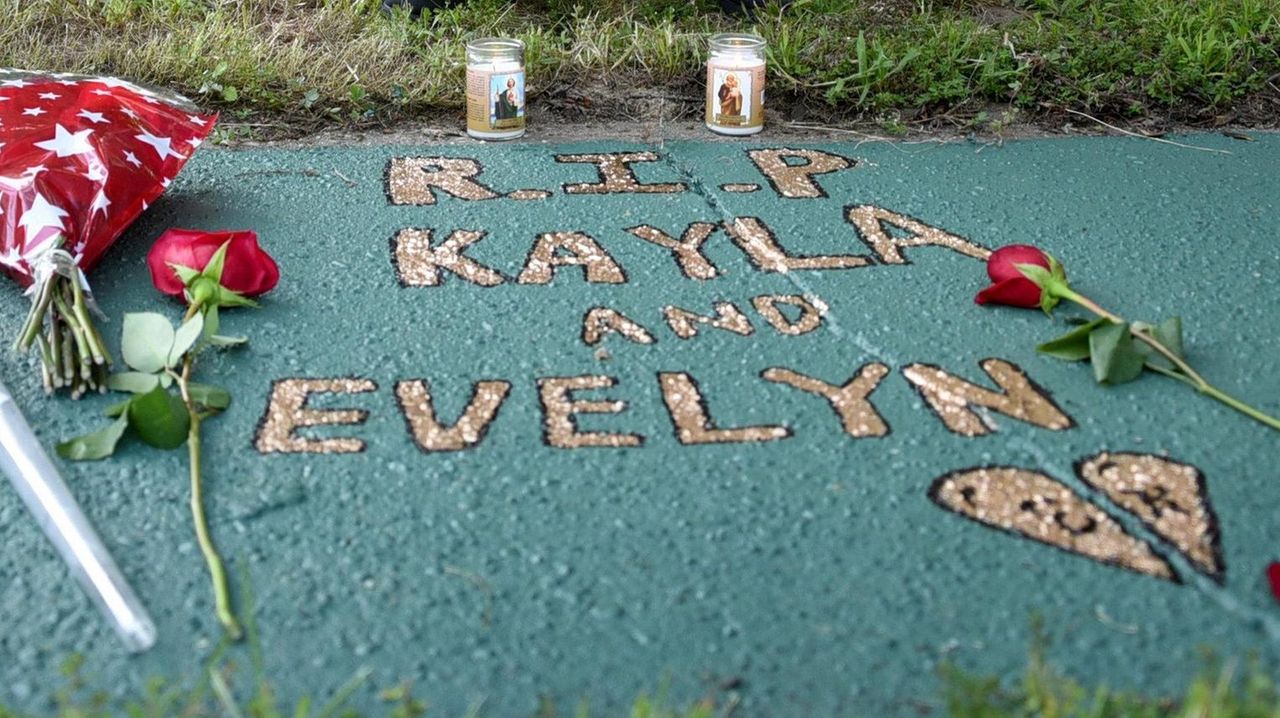 A transcript of the 911 call Drago made, describing a frantic scene, is part of the court file in her criminally negligent homicide case as her trial is set to begin this week in state court in Central Islip.

“You have to get an ambulance here,” Drago said, giving her location on Ray Court. “I just ran over somebody. She’s in the street. She’s not moving … I think I ran over her head. There’s blood. She’s not moving.”

It was the day commemorating the second anniversary of the killings of Rodriguez’s daughter, Kayla Cuevas, 16, and her 15-year-old friend Nisa Mickens — fellow Brentwood High School students who federal prosecutors say died at the hands of alleged MS-13 gang members who are awaiting trial.

A candlelight vigil had been planned for that evening to remember the teenagers and mark the two-year anniversary of the discovery of the 16-year-old’s body on the block, where Drago’s mother owned a home.

Rodriguez had set up a sidewalk memorial that included balloons, candles, a photo of Kayla in her Junior ROTC uniform and a table with a floral arrangement in front of the home, according to Suffolk prosecutors.

They have said Rodriguez and Freddy Cuevas, Kayla’s father and Rodriguez’s partner, rushed to the cul-de-sac, close to their own home, after hearing the memorial had been destroyed.

Prosecutors contend that a confrontation then ensued with Drago, who had dismantled the memorial so that potential buyers of her mother’s property — then for sale — wouldn’t be scared off. Drago had stuffed the items that wouldn't fit into a garbage can, including the photo and flowers, into the back of her Nissan, according to the district attorney's office.

But the parents, demanding the return of the memorial items, stood in front of Drago’s Nissan and blocked her and her fiancé from driving away before Drago stepped on the gas despite two warnings from Cuevas that she would strike Rodriguez if she did so, according to prosecutors.

They've said the acceleration knocked Rodriguez, 50, to the ground before the Nissan’s front and rear left tires ran her over — an encounter a News 12 Long Island team that was in the neighborhood to cover the vigil captured on video.

That video and Drago’s 911 call are part of the evidence a jury will consider after testimony gets underway. After previous juror pre-screening, the final selection of 12 panelists who will sit on the jury is scheduled to start Monday.

While clearly rattled on the 911 call, Drago, 59, of Patchogue, also uttered words her attorney, Stephen Kunken, likely will point to as he tries to show jurors his client feared for her life.

It’s expected he’ll argue that Drago, a registered nurse, also reacted as someone with a history of treatment for post-traumatic stress disorder and panic disorder that began after a patient assaulted her in a hospital psychiatric ward in 2008.

“She just tried to attack me,” Drago also said on the 911 call, referencing the presence of Rodriguez and Cuevas at the scene. “It’s where the memorial is in Brentwood. You need to get here.”

The motorist then gave her name and spelled it.

“I [expletive] killed this woman!” Drago said, before describing her vehicle as a white 2016 Nissan Rogue. “Oh my God,” she added.

Court records show that minutes later Drago told one Suffolk police officer who arrived at the scene that the encounter “had happened so fast.”

The records show that Drago also told another officer she had wanted to leave and had been trying to do so before Rodriguez “must have tripped over her feet and went under the wheels.”

Drago also said she had cleaned up memorials in the past and that she needed to clean up this one in front of the house because someone was coming to look at the property.

In the past, Drago told police, she had lost possible sales because of other memorials and had moved her mother off the property after her mother got threats.

Kunken, the defense attorney, said in an interview that Drago’s mother was the person who had discovered Kayla’s body on her property after the teenager’s homicide.

Drago also told police at the scene on Ray Court on the day of Rodriguez’s death that she and her fiancé had been afraid of Rodriguez and her partner that day.

“They came flying, they were pounding on the car,” she said.

Suffolk prosecutors declined to comment Friday on the upcoming trial.

Drago is facing up to 1 1/3 to 4 years in prison if jurors convict her of criminally negligent homicide — the top count against her. Besides the low-level felony, the nurse also faces misdemeanor charges of criminal mischief and petit larceny related to her alleged destruction of the memorial. She pleaded not guilty to the charges.

Kunken said the News 12 video will thrust jurors into the role of eyewitnesses who will see and hear the threat his client faced that day.

“Our position is that AnnMarie was in a position to make a choice: fight or flight,” he said, describing Rodriguez’s death as a “tragic accident.”

The Commack attorney said Rodriguez and Cuevas confronted Drago “in an extremely angry manner” as Drago and her fiancé sat in her vehicle in front of her mother’s house.

He said the couple first blocked his client’s Nissan from leaving, carrying out a “nonstop verbal attack” that was “physically threatening” from the time they pulled into the cul-de-sac.

Kunken said there was “no back-and-forth interaction,” and that Cuevas circled the vehicle, threatening Drago and ordering her to get out, while using expletives.

“She was scared to death that she was going to get seriously hurt or killed and her passenger felt the same way,” the defense attorney said.

When Cuevas went to the rear of the Nissan, Drago pulled forward because she didn’t see Rodriguez, who wasn’t directly in front but off to the front left side, according to Kunken.

“She looked and she felt that it was safe to move the car forward to get away from Freddy Cuevas. And she started to move the car. And the video will show, slowly,” Kunken said.

But prosecutor Marc Lindemann said in court papers that Rodriguez and Cuevas didn't have any weapons and didn't make any physical threats.

"Nothing forced the defendant to start driving," he said.

Criminal law experts say challenges await both the prosecution and the defense during the trial before acting State Supreme Court Justice Fernando Camacho.

The proceeding could be both emotionally charged and legally complicated as Suffolk jurors consider a case involving a victim who died while grieving her slain teenage daughter and a statute that will compel them to consider the accused’s state of mind, according to area law professors.

They said Rodriguez is a sympathetic figure, as a mother who after her daughter’s death spoke out against MS-13, the criminal syndicate with ties to El Salvador and a reputation for barbaric machete attacks.

Rodriguez’s activism thrust her into a public spotlight that included testifying at a 2017 congressional hearing on Long Island about gang violence.

It also included meeting with President Donald Trump before his State of the Union address in 2018 in which he called Kayla and Nisa “precious girls” as he spoke about MS-13 violence in connection with his immigration policy plans.

“I think there’s going to be sympathy for the victim,” Fordham University School of Law Professor James Cohen said of Rodriguez.

Despite a judge’s instructions, Cohen said he believes juries are rarely able to put emotion to the side.

Pace Law School Professor Bennett Gershman said both the prosecution and defense have strong emotional appeals they can make to the jury.

“It’s going to be up to the judge to make sure that the emotional appeals don’t get out of hand and that the jury is able to focus on the evidence,” he said.

Gershman added that the defense can portray Drago as "a fragile, traumatized woman" and argue "that perhaps her illness or emotional or psychiatric condition just got the best of her and she really ... didn't know what she was doing."

But Cohen said Drago’s dismantling of the memorial is “a powerful window into her thinking” that is “not necessarily conclusive” but helps illustrate her state of mind.

“I think that’s a problem for the defendant,” he said.

Both professors, along with New York Law School Professor Emeritus Robert Blecker, said the trial would be complicated because understanding the law could be a hurdle for jurors.

For a jury to convict Drago of the top count, the 12 panelists must find she caused Evelyn Rodriguez’s death and did so with criminal negligence.

Under the law, that would mean Drago acted in a way that created a “substantial” and “unjustifiable” risk that Rodriguez would die, that she failed to perceive that risk and that it was a “gross deviation” from a reasonable person’s standard.

Blecker said that prosecuting the charge of criminally negligent homicide “tends not to be a slam dunk” because “the culpable mental state of criminal negligence is itself controversial.”

Pure accidents aren’t punishable and so Drago’s mental state will come into play when the jury decides if her actions were criminal, he said.

In addition, the law has “never adequately defined” what constitutes a substantial risk — so jurors could disagree about that, according to Blecker.

The criminal law expert also said the defense could claim Drago failed to perceive the risk but that it wasn’t grossly deviant “because she thought she was under attack.”

“You have to get an ambulance here. OK. Listen, 6 Ray Court, I just ran over somebody. She’s in the street. She’s not moving … I think I ran over her head. There’s blood. She’s not moving. It happened about three minutes ago … She just tried to attack me.”

“It’s where the memorial is in Brentwood. You need to get here. All right, thank you. My name is AnnMarie. My last name is Drago, D-R-A-G-O. I [expletive] killed this woman! I’m driving a 2016 Nissan Rogue R-O-G-U-E. White, white. Oh my God.”

Below is an excerpt from AnnMarie Drago’s statements to police on Sept. 14, 2018, on Ray Court in Brentwood, as documented in court records.

“She must have tripped over her own feet.”

“They came flying, they were pounding on the car.”

“It happened so fast.”

Jones Beach lifeguard reports being bitten by shark
Searchers: No weekend bull sightings, but he likely hasn't left the area
2:10
Mayor: All NYC employees, including NYPD, must be COVID vaccinated or test weekly
Officials: 4 separate car crashes within 2 hours in North Babylon
Glen Cove IDA failed to collect $250G in late fees, state audit says
15 Nassau beaches closed due to elevated bacteria levels from heavy rain
Didn’t find what you were looking for?