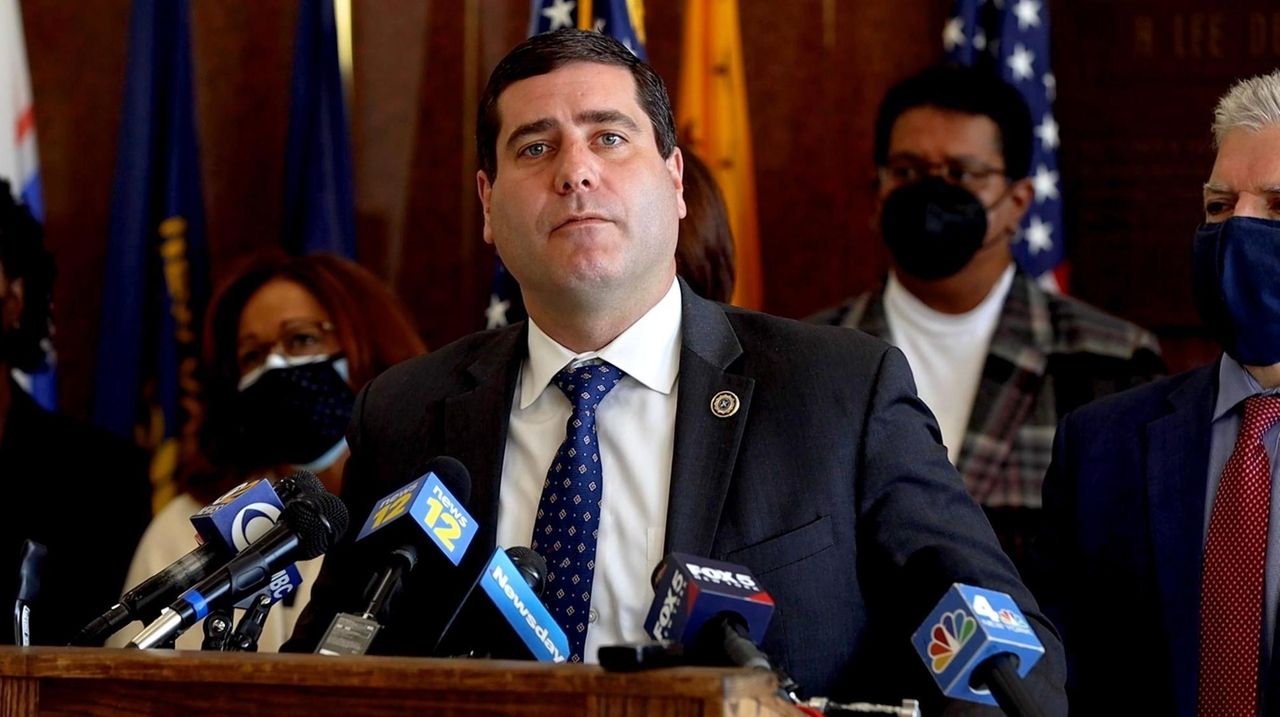 Suffolk County officials on Monday announced the formation of a hate crimes task force in response to the recent wave of hate crimes against Asian Americans around the country. Newsday's Cecilia Dowd has the details. Credit: Howard Schnapp

A Hate Crimes Task Force of eight prosecutors with special training in handling bias-motivated offenses launched Monday in the Suffolk County District Attorney’s Office as elected leaders said the initiative will include partnerships with other county agencies to combat such incidents and hold offenders accountable.

The program is starting amid a recent national focus on hate-related incidents targeting Asian Americans, with Suffolk County Executive Steve Bellone also announcing that a "Stop Asian Hate" rally would be held at noon Saturday at the H. Lee Dennison Building in Hauppauge.

"We’re taking concrete steps to root out hate in our community and hold those accountable who are committing hate crimes," Suffolk District Attorney Timothy Sini said Monday, as Bellone and other county officials joined him at the same government building for a news conference.

Sini said the nation is "in the throes of a crisis" in which nonwhite communities are being targeted and victimized, including a heightened number of attacks against members of the Asian American and Pacific Islander communities that he called "disgusting" and "against everything we value as Americans."

Law enforcement officials will collaborate with the Suffolk County Human Rights Commission as part of the task force, which includes the reinstatement of a program aimed at teaching people who commit hate crimes to overcome their biases, authorities said. The Stop Bias Program will be mandatory for defendants who are going to be sentenced in any hate crime cases, according to Sini.

He said Suffolk prosecutors named to the task force will share their hate crimes expertise while still working in their current assignments within the district attorney's office.

Suffolk Police Commissioner Geraldine Hart said while the county hasn’t seen a rise in hate crimes recently as other parts of the country have, the task force is "a critical step to identify, investigate and eradicate" such offenses locally.

Bellone said the diversity that exists in Suffolk "is a strength of ours" and called hate crimes "particularly heinous," while applauding the aim of the new task force.

Last week, police on Long Island said they were on alert after the same gunman allegedly shot eight people dead, six of Asian descent, in Atlanta-area spas. Nassau police said they were intensifying patrols in parts of the county. Suffolk police said they were monitoring intelligence reports from law enforcement partners about any potential similar threats locally.

Statistics from the Suffolk County Police Department show that from 2019 through the end of 2020, officials identified 134 incidents as hate crimes or hate-related incidents.

In Nassau County, District Attorney Madeline Singas created a Hate Crimes Unit in 2017, which a Singas spokesman on Monday said handled 58 hate crime cases in 2019 and 40 in 2020.