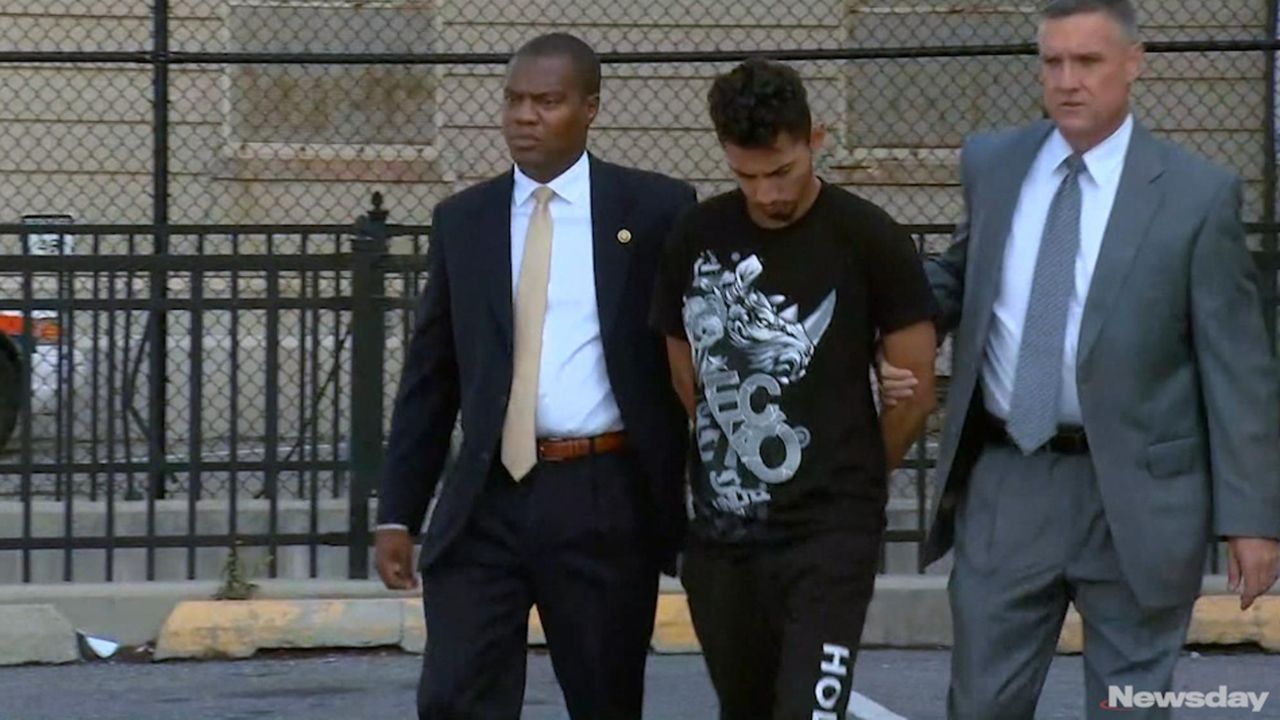 Nassau County police on Wednesday, Aug. 16, 2017, said they arrested Kevin Granados-Coreas, 19, of Rosedale, on a charge of second-degree murder in the death of Julio Cesar Gonzales-Espantzay of Valley Stream. Granados-Coreas is the second man charged in connection with the slaying; Gonzales-Espantzay's mutilated body was found in the Massapequa Preserve in March. Credit: News 12 Long Island

Two MS-13 gang members arrested in the January slaying of a 19-year-old Valley Stream man in the Massapequa Preserve stabbed the victim with machetes and shot him in a quest to possibly “move up in stature in MS-13,” police said Wednesday.

Nassau County police announced Wednesday the arrests of the suspects, both described as MS-13 gang members: Kevin Granados-Coreas, 19, of Rosedale, Queens, who was arrested Tuesday, and Carlos Portillo, 22, of Princeton Street in Hempstead, who was arrested on July 29.

Both were charged with second-degree murder in the Jan. 28 killing of Julio Cesar Gonzales-Espantzay, 19, of Valley Stream, and were ordered held without bail at their Hempstead arraignments. Both were represented by Legal Aid Society attorneys, who declined to comment to the media.

Acting Police Commissioner Patrick Ryder said he had a message for MS-13 gang members: “To the bad guys out there, we will be relentless in hunting you down when you commit those crimes in our county.”

Nearly two months after the killing — on March 23 — Gonzales-Espantzay’s body was found by a man walking his dog in the preserve, police said. The body was found with several cuts and blunt-force trauma to the upper body and head. The victim’s family could not be reached for comment Wednesday.

The discovery unnerved residents and visitors to the popular 432-acre park, which includes walking and biking trails, and prompted police to install surveillance cameras.

Det. Lt. Stephen Fitzpatrick, commanding officer of Nassau police’s Homicide Squad, said Wednesday at a news briefing at police headquarters in Mineola that investigators believe that there were “possibly others involved” in Gonzales-Espantzay’s killing. “We think it’s more than two,” he said.

Granados-Coreas befriended Gonzales-Espantzay in late 2016 and lured him to the preserve on the night of the killing, police said.

“On January 28, he lured him into a vehicle with others, with the promise of marijuana and sexual favors,” said Fitzpatrick. “They then subsequently took him to the Massapequa Preserve, where they brutally attacked him with large knives and machetes and subsequently killed him there.”

Death of unidentified man ruled homicide On March 25, 2017, Det. Lt. Stephen Fitzpatrick, commander of Nassau County police's homicide squad, announced that the death of an unidentified young Hispanic man discovered in the Massapequa preserve on Thursday afternoon has been ruled a homicide. Fitzpatrick said the victim had several lacerations and blunt-force trauma to his upper body and head. Detectives ask anyone with information to call Crime Stoppers at 800-244-8477, where the caller will remain anonymous, or the Nassau County Police Department Homicide Squad at 516-573-7788.  Credit: Howard Schnapp

The killing took place at about 10:55 p.m. on Seaview Avenue in Massapequa, inside the preserve.

When asked about a motive, Fitzpatrick said: “Commonly, they pick a victim to move up in stature in MS-13. You have to show your loyalty and commitment to the group and commonly with that group they murder or assault people. “

Gonzales-Espantzay, who didn’t have identification when he was found and had not been reported missing, was identified on April 5 through DNA, Fitzpatrick said.

Nassau cops conferred with Suffolk police and the NYPD about the case, which “proved to be fruitful,” said Fitzpatrick.

In July, NYPD detectives passed along a tip to Nassau police about a person “who may have information” on the homicide, said Fitzpatrick, and investigators interviewed several people.

Cops then got a search warrant for Portillo’s Hempstead home, where Fitzpatrick said police found “weapons, cellphones and paperwork in regard to MS-13.”

MS-13 killings have rocked Suffolk County in recent years. There have been 17 slayings attributed to the gang in about the last 18 months, including the high-profile killings of four young men in a Central Islip park this April and the September 2016 slayings of Nisa Mickens, 15, and Kayla Cuevas, 16 — prompting visits from President Donald Trump and Attorney General Jeff Sessions.

In Nassau, since 2016, there have been four killings attributed to MS-13, said Det. Lt. Richard LeBrun, a department spokesman. There have been eight homicides in Nassau County this year.

Officials: Surveillance cameras to be put in park

Many of the Suffolk MS-13 killings have been prosecuted in the federal system, where racketeering statutes have been used to prosecute gang members for decades.

“Nineteen-year-olds hacked up and dropped in our preserves is just something that should really be shocking to residents of this county,” said Singas. “It’s shocking to us in law enforcement and we see a lot — the level of brutality and violence.”

A handcuffed Granados-Coreas did not comment as he was escorted by detectives out of police headquarters Wednesday morning before arraignment in First District Court in Hempstead.

Granados-Coreas was represented by a Legal Aid Society attorney, who said in court he attended high school in Rosedale, Queens, and had recently worked in a tire shop in Queens.

AG Letitia James expected to announce run for governor
1:36
Drop in COVID-19 cases on LI doesn't mean pandemic is over, experts say
Man sentenced to 19 years for fatal stabbing over misplaced cellphone
One-time break: New exemption left 7 Nassau homes untaxed in 2020-21
All 19 seats up for election in Nassau legislature
Toulon complains about Sini mailer
Didn’t find what you were looking for?