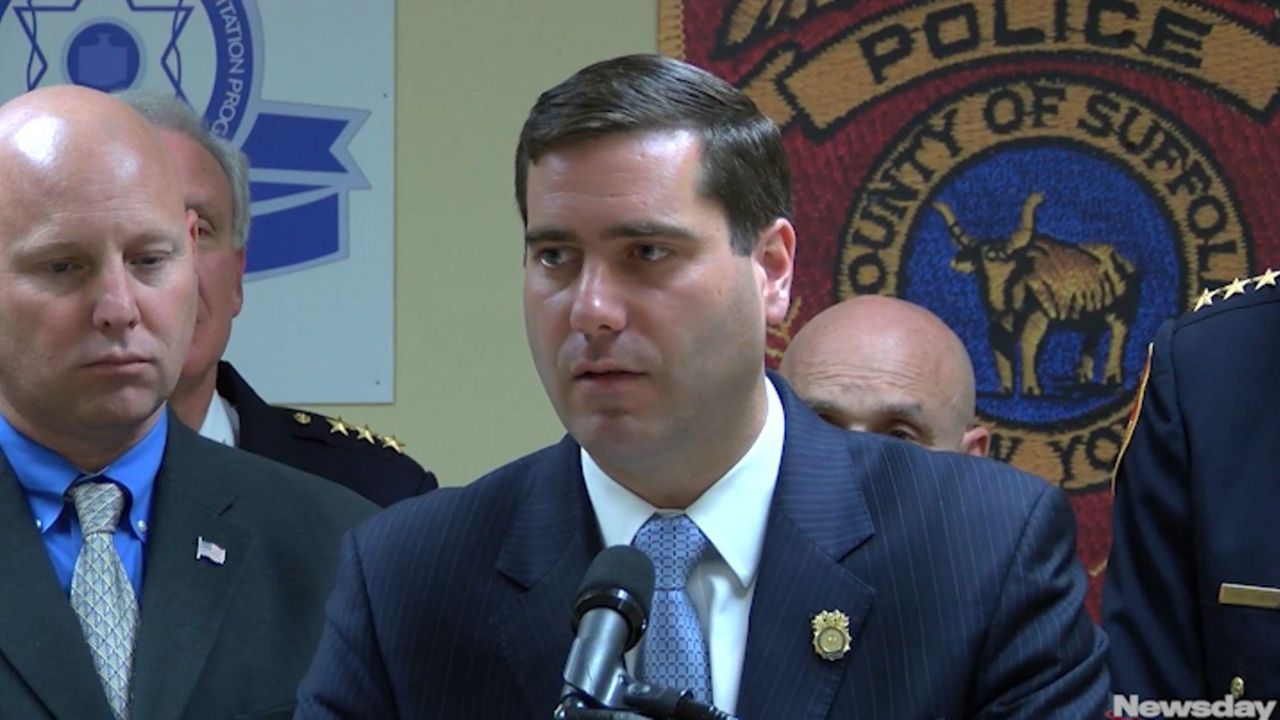 Suffolk County Police Commissioner Timothy Sini said on Wednesday, May 3, 2017, that an armed robber and his female getaway driver were arrested after committing four crimes in just over a 24-hour period. "It was a Bonnie and Clyde-type situation," Sini told reporters. Credit: Stringer News Service

An armed robber and his female getaway driver were arrested after committing four crimes in just over a 24-hour period, Suffolk police said on Wednesday.

“It was a Bonnie and Clyde-type situation,” Police Commissioner Timothy Sini told reporters.

The swiftness with which the couple carried out the crimes is unusual in Suffolk, he said. No one was injured, he added.

Adam Cobian, 44, of Ridge and Heather Damato-Keshner, 42, of Holbrook were arrested at the Marina Motel at 134 Montauk Hwy. in Lindenhurst, at about 8:20 a.m., police said in a statement.

They first attempted an armed robbery at a Speedway gas station on North Ocean Avenue in Medford at 3:53 a.m. on Tuesday, police said.

The robbers resumed their crime spree shortly after midnight on Wednesday at a BP gas station at 365 Route 25A in Miller Place, police said. After threatening a worker with a “long gun,” the male robber obtained about $40, Sini said.

Arshad Ali, a manager at the gas station, told Newsday the robber wore a mask and appeared to be carrying a shotgun. “He was cursing,” he said.

At 5:10 a.m., they struck again at a Lindenhurst 7-Eleven at 251 Montauk Hwy., where the robber obtained an unknown amount of cash and cigarettes.

Muhammad Shah, manager of the 7-Eleven, said the suspect used the butt end of a long rifle to hit the clerk, who was standing next to the sandwich display, in the leg. The robber “was cursing,” Shah said. “He hit [the clerk] and demanded money, so he filled the bag and left.”

The store’s security video helped police identify the suspect, Sini said. The message for store owners, he said, “is make sure you have the right technology.”

Suffolk police arrested the couple after they found a white Honda there that they believed was used in the robberies. They also saw a man who matched the description of the male suspect, police said.

Cobian was charged with three counts of robbery, attempted robbery, criminal use of a firearm and petty larceny, the police said. He also was arrested for stealing cigarettes from the Gulf gas station at 3775 Express Drive North in Islandia at about 6:27 p.m. on Friday, the police said.

Damato-Keshner was charged with three counts of robbery and one count of attempted robbery.

The two are scheduled to be arraigned at First District Court in Central Islip on Thursday, police said.