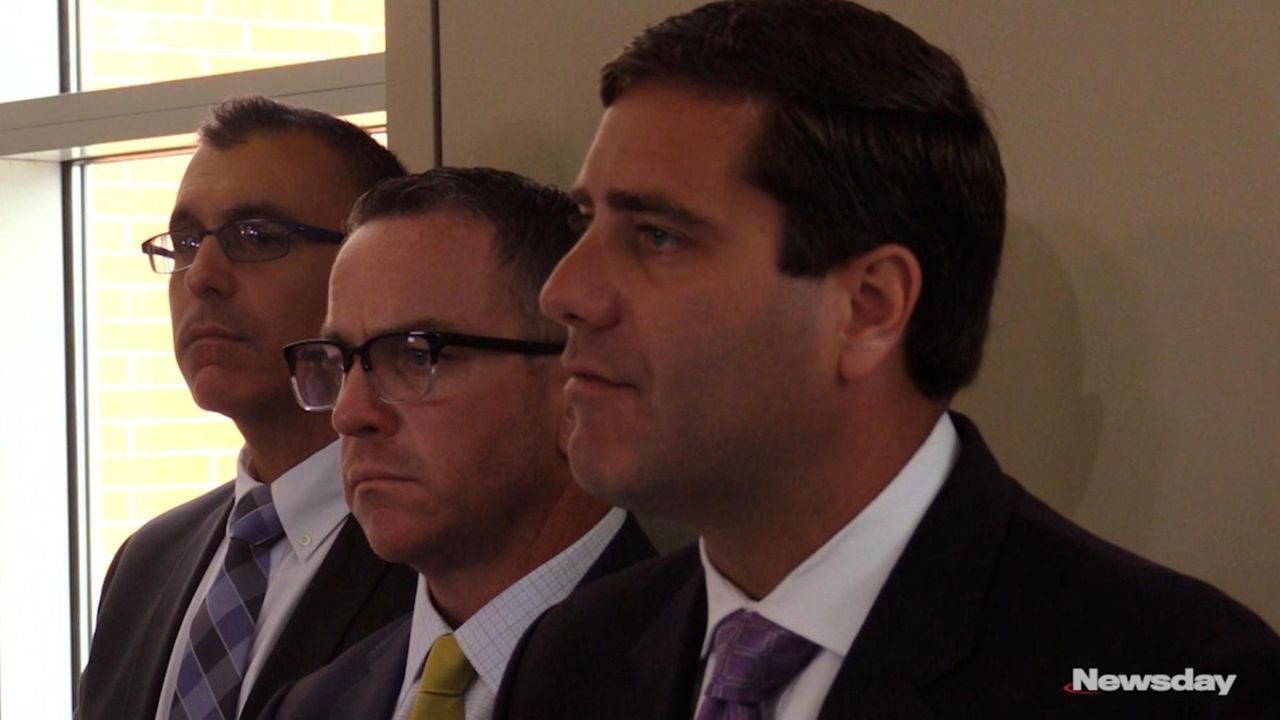 On Wednesday, Suffolk County District Attorney Timothy Sini spoke at a news conference at the John P. Cohalan Jr. Court Complex in Central Islip about an AutoZone delivery driver who could face increased charges in the death of a pedestrian he is accused of hitting and dragging while she screamed, trapped in one of the van's wheel wells. Credit: Newsday / Morgan Campbell

An AutoZone delivery driver could face increased charges in the death of a pedestrian he is accused of hitting and dragging while she screamed, trapped in one of the van's wheel wells, Suffolk County District Attorney Timothy Sini said.

But for now, Donnell Hicks, 26, of Queens, pleaded not guilty in Central Islip to an indictment with a single charge of leaving the scene of a fatal accident. Afterward, Sini said the investigation of the case is continuing and prosecutors may return to a grand jury and seek more charges, if necessary. He did not say what those charges could be.

Assistant District Attorney Ray Varuolo said that at 1 p.m. on July 29, Hicks pulled out of the auto parts store's Deer Park location and hit two pedestrians — Eric Krems, 40, and his friend, Annmarie Christina, 38, of East Quogue. Varuolo said Christina got trapped in a wheel well of the 2017 Dodge Ram van, and that Hicks kept driving, ignoring her screams and those from witnesses nearby. Krems was treated for non-life-threatening injuries.

Varuolo said Hicks zigzagged across Deer Park Avenue, fishtailing across two lanes, before Christina's body became dislodged about a half mile away.

"Other motorists were forced to stop and look on in horror," Varuolo said.

Hicks got out of the van and looked underneath it, saw Christina on the ground and then got back in the van to make his next delivery at the AutoZone store in Ronkonkoma, Varuolo said.

"I didn't think she was alive," Hicks told detectives after his arrest, according to Sini. "I panicked, and I thought to myself, I have to get to my next job."

Christina was taken to Good Samaritan Hospital Medical Center in West Islip, where she was pronounced dead.

Much of what happened was captured on surveillance video and was seen by numerous witnesses, Varuolo said, adding that Hicks made admissions to detectives after he was arrested in Ronkonkoma.

"She was a beautiful girl and she didn't deserve to go this way," said a woman who identified herself as Christina's sister, but did not give her name.

Defense attorney Steven Gildin, of Garden City, said his client is "remorseful," but what happened was nothing more than an accident. He said prosecutors have no evidence of any crime.

"There was no witnesses," he said, suggesting there was some sort of confrontation involving the pedestrians before he hit them. "There was a lot more going on than what was stated by the district attorney."

He also said his client was questioned inappropriately for hours at the AutoZone store instead of being taken to a police precinct for questioning.

Sini later said there was no confrontation between the pedestrians and Hicks, and said of Gildin's remarks, "I think we're on two different planets."