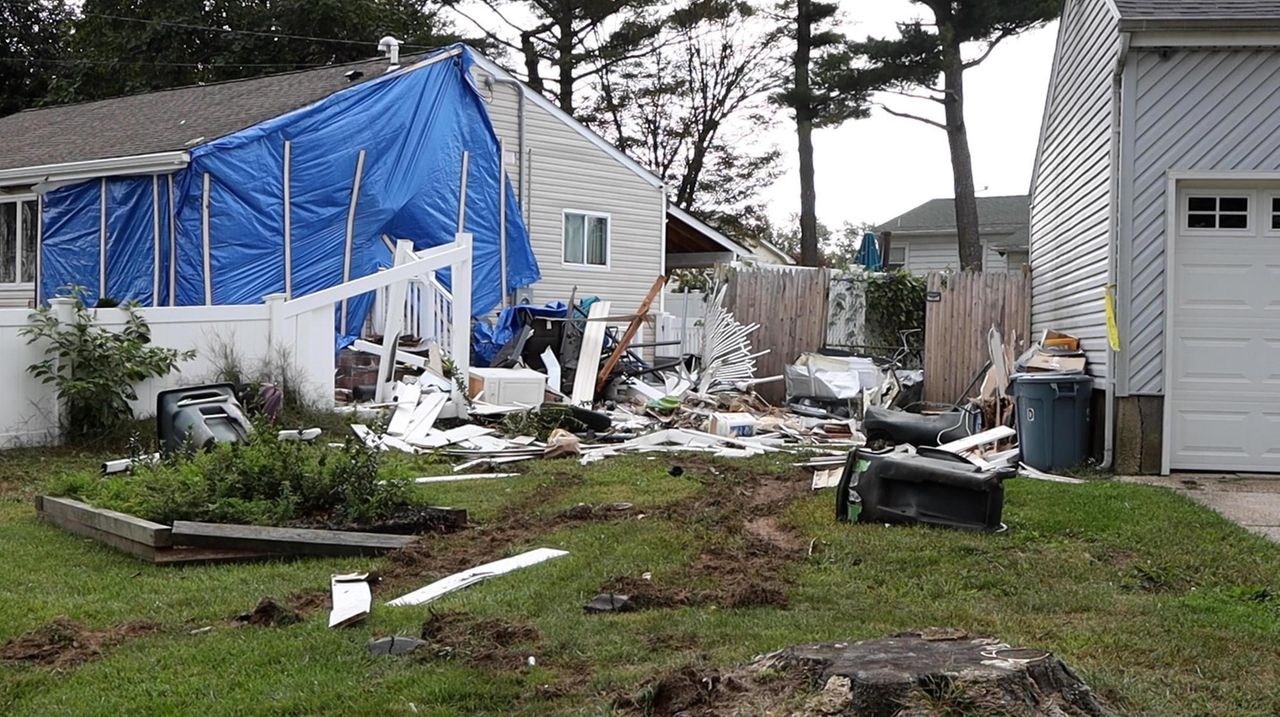 Cameras captured an out-of-control SUV flying across a Brentwood lawn Sunday, then hitting the house. The driver was allegedly drunk behind the wheel, with her three kids in the car. Watch it here. Credit: Howard Schnapp; Angelica Reyes; Stringer News; News 12 Long Island

This story was reported by Cecilia Dowd, Antonio Planas and John Valenti. It was written by Planas and Valenti.

The out-of-control SUV captured by a security camera Sunday night in Brentwood looked like something akin to a speeding blur as it careened off a residential street and into a home. After the Lincoln Aviator nearly went airborne as it passed sideways out of the camera's view, terrified screams of three young girls inside, ages 4, 5 and 8, could be heard.

The mother of the children, Ashley Thomas-Smith, 34, of Bay Shore, was driving the Aviator, Suffolk County police said. She was arrested and charged with driving while intoxicated under Leandra's Law and three counts of endangering the welfare of a child, police said.

Neither Thomas-Smith nor her daughters were seriously injured, authorities said.

Leandra's Law makes it a felony, even on first offense, to drive drunk with anyone under age 16 in the vehicle.

The SUV crashed "through a house" on Blue Jay Drive about 6:40 p.m. Sunday, police said. Surveillance camera footage shows a quiet residential street before the loud sound of an engine can be heard. The Aviator then careens into view from the right, before banking left and disappearing. Moments the later the sounds of a crash and children screaming are heard.

No one was inside the home when the SUV hit it, said Estefany Reyes, whose relatives live there. The family runs a state-licensed day care out of the home, a business that is now on hold, Reyes said.

"This is my sister's house and they have three little boys who are always playing right in the area," said Reyes, of Brentwood. "We were just so thankful to God ... because that's exactly where we would be. We were just there the night before as a family."

Reyes said she and her relatives were only minutes away when a cellphone app alerted them of movement inside the house. When they got to the home, there were already dozens of neighbors rushing to the aid of those inside the SUV. It took first-responders about 30 minutes to get Thomas-Smith out of the Aviator, Reyes said.

Reyes said she got "goose bumps" while viewing surveillance footage of the crash. Then she heard the children inside the SUV.

"Once you hear the crash, you can hear them scream," she said. "We are just happy that they're OK."

Thomas-Smith was arraigned in First District Court in Central Islip Monday where she pleaded not guilty to the charges. She was released from custody and issued a temporary order of protection, according to court records. She is due back in court Friday.

Following her court appearance, Thomas-Smith pulled her blue shirt over her face as she encountered reporters. After Thomas-Smith was told a newborn and other young children live in the home, she said: "God bless the kids and God bless their newborn. And I apologize about the kids."

Police said Thomas-Smith and her daughters were taken to Southside Hospital in Bay Shore, following the crash. The children were later released to the custody of their father.

2:20
Governor extends mask mandate for indoor public places to Feb. 10
Two LI nurses accused of faking COVID-19 vaccination cards
3:10
Forecast: At least a foot of snow expected over much of LI
3:06
Thousands gather to honor slain NYPD Officer Jason Rivera, a 'hero' who wanted to make a difference
Oyster Bay's computer outage prompts state review of town's IT security
1:51
How race is taught in LI schools — and why some educators feel under siege
Didn’t find what you were looking for?