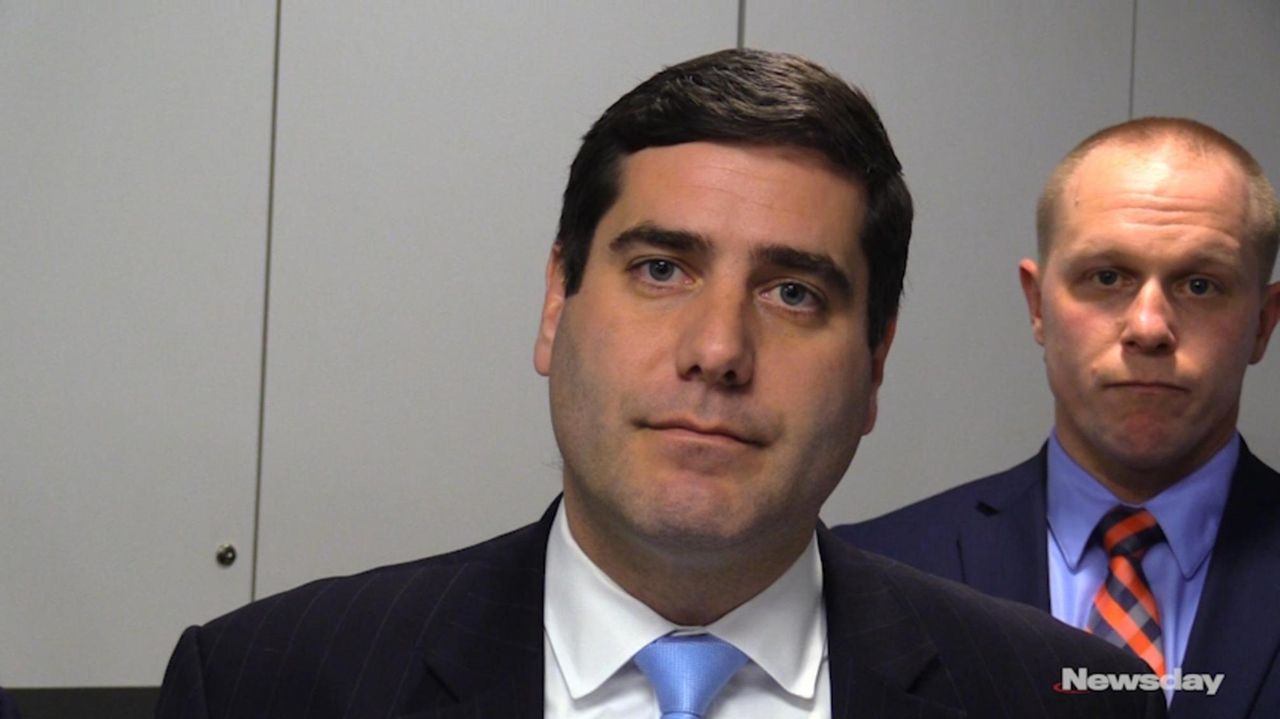 At a news conference on Thursday, Suffolk County District Attorney Timothy Sini listed several increased charges for the Bellport teen in the crash that killed a husband and wife and his own brother on Feb. 9, 2019.  Credit: James Carbone

A Bellport teen pleaded not guilty Thursday from his hospital bed to increased charges stemming from a crash that killed three people after prosecutors say the driver was fleeing from police in a stolen car.

Nahriek Belford, 17, hit 106 mph on Middle Country Road in Middle Island before he hit a Honda CRV, cutting it in half, on Feb. 9, Assistant District Attorney Jacob DeLauter said. The impact killed the couple in the Honda, Jerome Weingarten, 74, and his wife, Randee Weingarten, 71, and also killed Belford's brother, Angelo Belford, 19. Another of Belford's passengers, Jaquelle Funderburke, 16, was seriously injured.

Belford is now charged with four counts of first-degree assault, three counts of second-degree manslaughter, unlawful fleeing of a police officer, criminal possession of stolen property and other charges. He faces a maximum of 25 years in prison if convicted. He was originally charged only with reckless endangerment.

DeLauter said police followed Belford after he ran a stop sign in Yaphank, and determined that the 2015 Nissan Rogue he was driving was stolen, and the license plates on it were stolen from another car. DeLauter said Belford belongs to the Bloods street gang's Natural Born Killers subset.

"The defendant had no intention of stopping for any law enforcement officer," DeLauter said. Belford's speed increased to dangerous levels as he turned onto Middle Country Road, repeatedly crossing into oncoming traffic until he hit the Weingarten's Honda as it tried to turn left into an apartment complex. The impact was four minutes after police first saw him.

Defense attorney Lani Houston of the Suffolk Legal Aid Society said her client "vehemently denies" any gang membership and asked for lower bail so that he could get better medical care.

"He is obviously not a flight risk, as he can't even walk," she said. "His hip had to be put back together."

The facts in this case echoed that of Jamel Turner, 25, who pleaded guilty Wednesday to assault and aggravated vehicular homicide for killing five people on Feb. 14, 2018, while fleeing police in a stolen car, also on Middle Country Road.

"I think there's a larger investigation that needs to take place in regard with police pursuits," Houston said afterward.

"Three people are dead because of the actions of the defendant," he said. "The police encounter is not relevant. The defendant is responsible for the horrific events that resulted."

Turner originally was charged with second-degree murder, but Sini said Belford's actions did not quite rise to that level. He noted that Turner was high on marijuana, drove 154 mph — much faster than Belford's 106 mph on the same road -- and was begged by his passenger  to slow down before his crash.

"We will bring all appropriate charges" in such cases, Sini said. "We will not overcharge. We will not undercharge."

Teen in triple fatal crash arraignedThe Bellport teen accused of killing three people while fleeing from police was driving a ... Most dangerous spots for LI driversThere were 1,073 fatal car accidents on Long Island from 2012 to 2016, according to an examination of National Highway Traffic Safety Administration data. The agency compiled that data from law enforcement. Live traffic