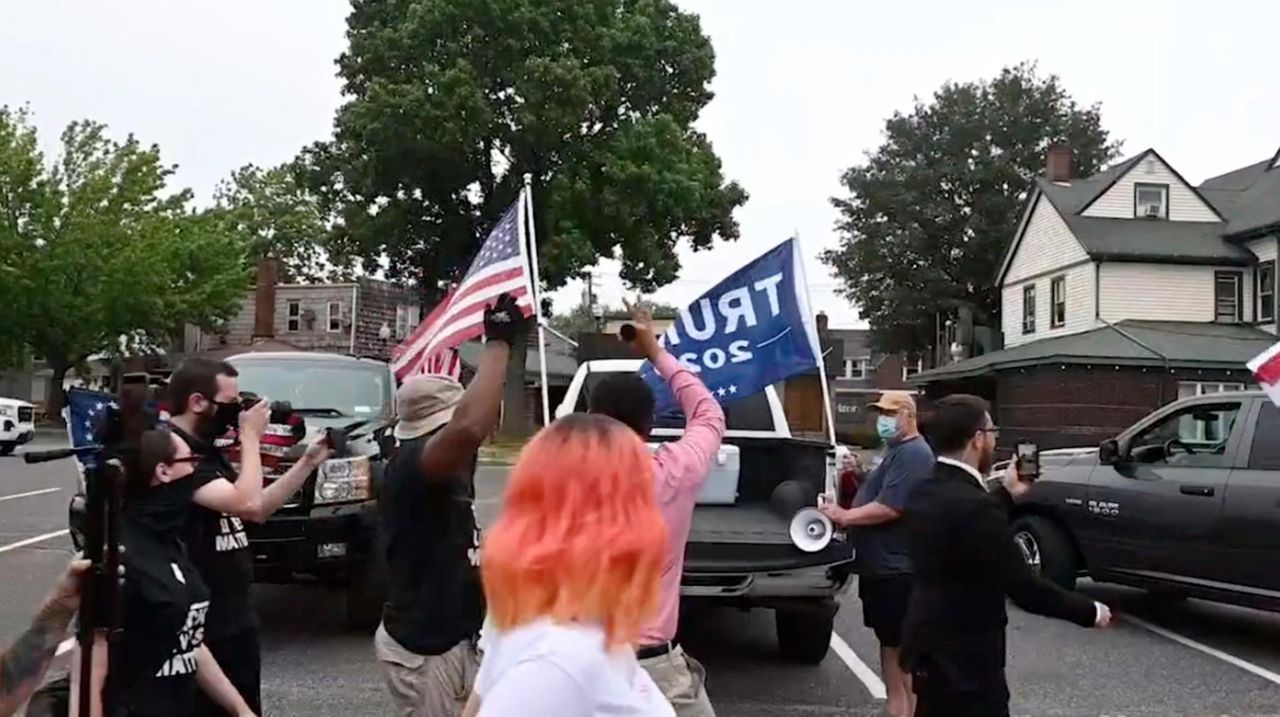 On Tuesday, 60 protesters gathered at the LIRR station in Kings Park, many of them holding signs that read “End Segregation on LI,” while nearby, a handful of counterprotesters yelled “All Lives Matter” and “go home” to the crowd.  Credit: Newsday / Steve Pfost

Suffolk County detectives continued to canvass for crime scene video of a motorist driving into a crowd of Black Lives Matters protesters Monday, as demonstrators rallied again Tuesday in Kings Park and called for heightened charges in the case.

Anthony Cambareri, 36, of Gabon Lane in Coram, was driving a 2018 Toyota RAV4 west on Broadway in Huntington shortly before 7 p.m. when he struck two protesters standing in the roadway, which was open to traffic, police said.

Cambareri, who was not injured, fled the scene and was apprehended a short time later, authorities said. He was charged with third-degree assault and issued a desk appearance ticket.

“His charges need to be raised to at least a felony,” said Jeremiah Bennett, 26, of East Meadow, one of the men who was hit.

Bennett and the other victim were treated and released from Huntington Hospital, authorities said.

Prosecutors said Cambareri, who did not return calls for comment, is scheduled to be arraigned July 24.

Monday's protest was organized by Tiandre Tuosto, 25, and his brother, Terrel Tuosto, 28, both of West Hempstead. The brothers cofounded the @lipeacefulprotests Instagram page where they share updates about Long Island protests with their more than 1,000 followers.

Tiandre Tuosto said he was walking alongside 25 to 30 other marchers Monday evening in the street when a driver  hit the two men before speeding away. Tuosto said Bennett hit the hood of the car and rolled off.

Tiandre Tuosto contended police treated the incident like a typical traffic stop, asking Cambareri for his license and registration and charging him with a misdemeanor. "His charges should be way more than that," he said.

A Suffolk police spokeswoman said third-degree assault "is the most appropriate charge."

During a news briefing Tuesday on the coronavirus pandemic, Police Commissioner Geraldine Hart said only: “Detectives are out and continue to canvass for video and the investigation is ongoing."

On Tuesday, 60 protesters gathered at the Long Island Rail Road station in Kings Park, many of them holding signs that read “End Segregation on LI” and “Black Lives Matter.”

Nearby, a handful of counterprotesters yelled through a megaphone “All Lives Matter” and “go home” to the crowd. The group of about four men stood alongside two pickup trucks from which they flew a large American flag and "Trump 2020" flag.

The protesters marching in support of the Black Lives Matter movement peacefully approached the four men, with Terrel Tuosto initiating a dialogue and asking the crowd to remain calm and listen.

“Why are you here today?” Terrel Tuosto asked the men.

“To defend our community,” one man responded.

“From what?” several people in the crowd shouted.

The man, who introduced himself as a longtime Kings Park resident, said he wanted to show support for police officers.

“It’s ridiculous that because of a few bad eggs, police officers are being painted in such a negative light,” he said.

The groups engaged in a forum-style dialogue in which people in the crowd took turns speaking to each other through a microphone.

Those in support of police officers spoke about being against the destruction of property and marchers walking in support of racial equality elaborated on the many ways they believe “the current system is broken.”

Cops: Vehicle hits 2 protesters marching in HuntingtonWitnesses say between 25 and 30 Black Lives Matters demonstrators were walking when an SUV struck the protesters. The driver was arrested.