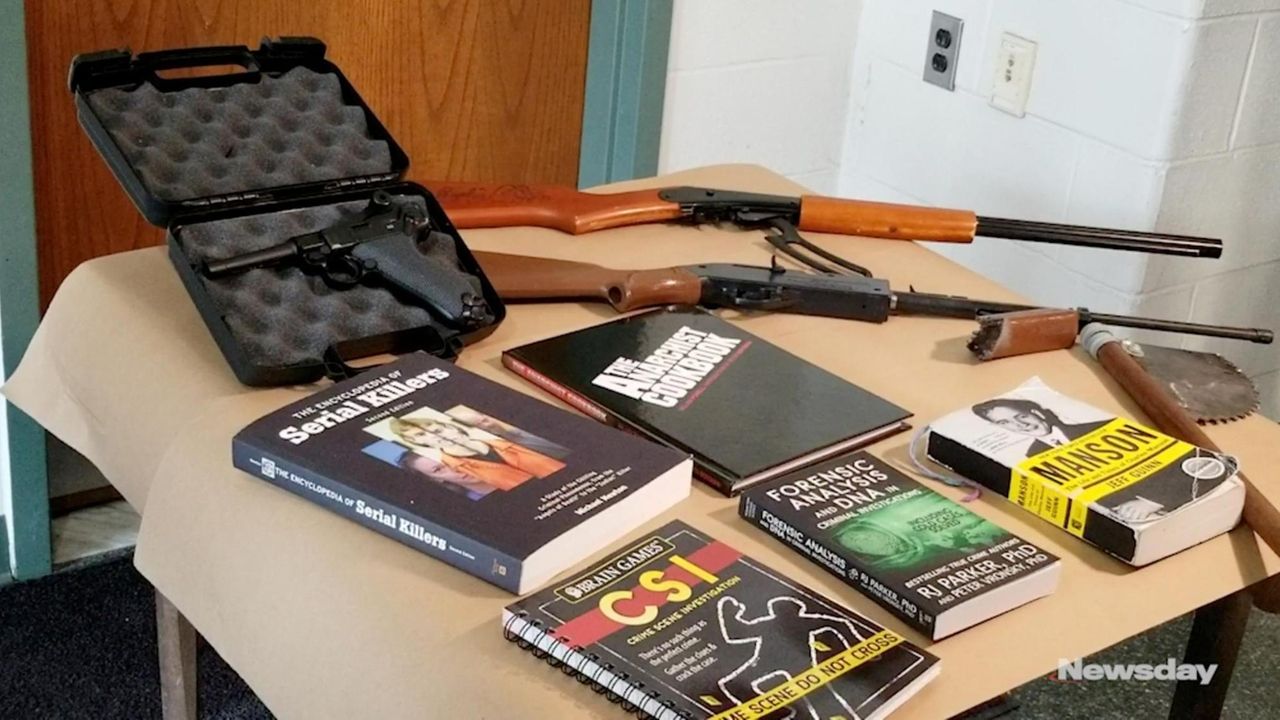 Three Connetquot High School students were arrested Thursday on conspiracy charges after they discussed a plan on a school bus, and within earshot of other riders, to detonate a bomb on campus, Suffolk police said.

In an "explicit" 20-minute conversation on the school bus, which was captured by an onboard surveillance video camera, the three students made no attempt to hide their plan, said Suffolk Deputy Chief of Detectives Matthew Lewis.

"They discuss the operation that they plan on executing. … It's explicit," said Lewis Thursday afternoon at a news conference. "It goes on for about 20 minutes. They’re not whispering. They are speaking openly, thankfully."

Police discovered three BB guns — including two BB long guns — and a copy of "The Anarchist Cookbook,” which contains bomb-making instructions, after searching the homes of the suspects, police said, but investigators found no bomb-making material, authorities said.

A defense attorney for one of the students said the book was part of a science project and had nothing to do with a plan to bomb the school.

But police treated the alleged plot as imminent. The high school on Seventh Street in Bohemia was evacuated for about 45 minutes Thursday as Suffolk officers scoured the campus for any sign of an explosive.

"While detectives are still investigating their motive, we want to make it clear that a plan to build a bomb, no matter the motivation, is a very serious offense," said Suffolk Police Commissioner Geraldine Hart. "I encourage all parents to speak to their children about the severity of this case as well as making any school threat. The department takes these threats extraordinarily seriously. School safety is one of our highest priorities and while the majority of these incidences do not rise to the level of violence, we treat all of them as if they can be executed."

The three accused students, two males and a female, all 16, face charges of fourth-degree conspiracy, a class E felony, and were taken into custody Thursday at the school, authorities said. The defendants each pleaded not guilty at their separate arraignments in Suffolk County Criminal Court in Central Islip late Thursday afternoon while separately, officials said, investigators continued combing through the students' cellphones and computers.

Judge Karen Kerr, after calling the allegations "very, very, very serious," released the trio on their own recognizance.

John Scarpa, the defense attorney for one of the male students, said the book "was the result of a science project and had nothing to do with the allegations."

Scarpa said the allegations are "totally out of character" for his client.

The female student's attorney, Michael Annibale of Garden City, said his client was suspended from school pending a hearing.

"Her mom is here and her family is taking this very seriously as this case progresses through the system," Annibale said.

Melissa Quinn, a Legal Aid attorney for the other male student, told the court her client is a student athlete, had no prior problems in school and no criminal record. Quinn declined to comment to a reporter.

In a pair of emails sent to teachers, staff and parents Thursday afternoon, Connetquot Superintendent Lynda G. Adams attempted to ease concerns of the school community and said school administrators acted swiftly after being told of a “possible threat.” Administrators began an investigation, Adams said, notified Suffolk police, and evacuated the campus.

“SCPD cleared the building and all students and staff returned to class,” she said in the first email, adding that the district has a “security force that is top notch, consisting of retired and active duty police and emergency services personnel.”

In the second email, Adams said: "This is a very serious situation and one we do not take lightly. The safety of our students and staff is our top priority and we will continue to take every threat of school violence seriously."

Adams added in the second email that the alleged bomb plot "was an isolated incident."

"Please be assured that the safety of our students and staff remains our main concern," she said.

Hart credited the students who heard the alleged plot and told school officials, with preventing a tragedy.

"I want to thank the heroes of this story, which are the students, who heard something and had the courage to say something," Hart said. "It’s not always easy but they did the right thing and I want to applaud their efforts.

Correction: An earlier version of this story contained incorrect information provided by the Suffolk County Police Department. Two of the suspects are male and one is female.

Husband-and-wife LIRR conductors stole wages, MTA internal watchdog says
2:15
De Blasio rolls out plan to address racial inqualities in education
Freeport teen who won vaccine scholarship welcomes the boost
Former Head of Harbor judge resigns amid misconduct allegations
Best: The Isles want to keep winning. The Coliseum already has.
Teacher who 'never did anything by halves' dies at 87
Didn’t find what you were looking for?