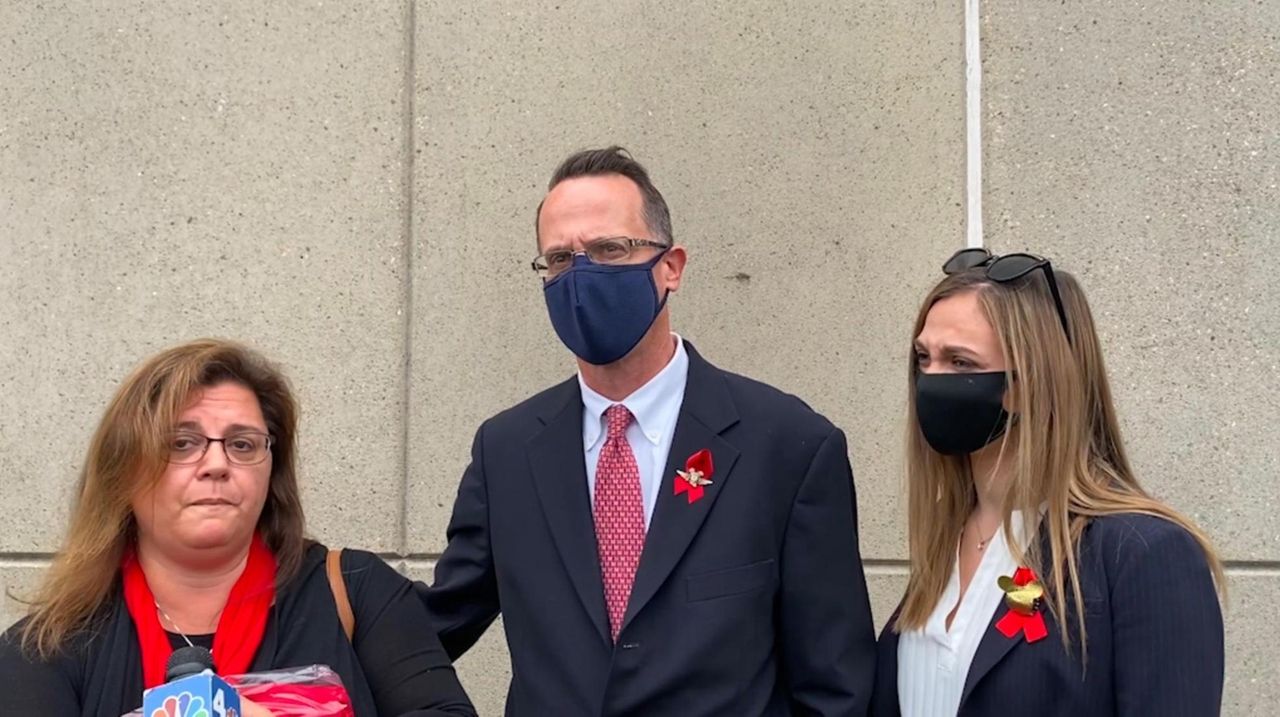 Day 3 of the juror misconduct hearing in Thomas Murphy case at which three more jurors testified Friday that they knew of no jury misconduct during the Boy Scout death trial.  Credit: John Roca

More jurors denied alleged misconduct Friday on the third day of a post-trial hearing in the case of a Holbrook man convicted last year of driving drunk and killing 12-year-old Boy Scout Andrew McMorris during a 2018 hike.

The victim’s mother, Alisa McMorris, clutched a red confirmation robe in the Riverhead courtroom — a garment her son would have worn in church this weekend to celebrate the sacrament if his life hadn’t been cut short.

"I felt like I needed to hold it, to keep him close because today’s very hard," McMorris, 46, said later with her husband, John McMorris, 49, by her side.

The hearing, which continues Sept. 29, is happening after a lawyer for defendant Thomas Murphy, 61, brought forth allegations that his client didn’t get a fair trial because of jury misconduct.

Two jurors and one alternate juror testified Friday — men referred to in court as Juror Number 11, Alternate Juror 6 and Juror Number 12 — and said they hadn’t discussed the case before the trial's deliberations stage and hadn’t heard other jurors do so either.

McMorris was in seventh grade when Murphy’s Mercedes-Benz barreled into him and other Troop 161 members on a hike in Manorville in September 2018. The victim's parents have called defense claims about jury misconduct a "cruel" delay tactic that is compounding their heartbreak.

"What’s happening in this court is a complete farce of the system," John McMorris said Friday.

Four jurors signed affidavits following Murphy’s conviction indicating there was misconduct by panelists that included discussing the case before deliberations in violation of their duties, according to Murphy’s attorney, Steven Politi.

Also Friday, Alternate Juror 6 testified one juror had seen a newspaper front cover in the courthouse’s lunchroom touting a story about some charges being dropped against Murphy and told a cashier the paper had to be flipped over.

That witness also said during questioning by prosecutor Brendan Ahern that Politi had told him, upon meeting to discuss jury conduct, that the trial had been unfair to his client. The witness said Politi had "possibly" been trying to influence him.

Politi wants the judge to set aside the verdict. But Ahern has said the defense is on a "fishing expedition."

The defense claimed during Murphy's trial that the crash on Sept. 30, 2018, was a tragic accident that "poorly supervised" Scouts caused after wandering onto an unmarked section of David Terry Road in Manorville.

But prosecutors said Murphy drove after a morning of drinking vodka on a golf course and was drunk when he plowed into the young Scouts as they traversed a 20-mile hike, fatally injuring McMorris, of Wading River, while seriously injuring three of his friends.

The panel also found him guilty of single misdemeanor counts of DWI, reckless driving and reckless endangerment, along with two misdemeanor assault counts.

On Thursday, seven other jurors testified they were unaware of any misconduct.

Politi said after court Friday it’s clear not every witness has told the truth.

"If every single person said they didn’t speak, yet multiple other witnesses say they witnessed people speak, that has to be false," he said, referring to the question of whether panelists discussed the case early. "Obviously, somebody’s lying."

The McMorrises said Andrew’s empty confirmation robe will hang Sunday in Trinity Lutheran Church in Islip, where his funeral was held, as his family celebrates with others who will receive the sacrament.

"What we want others to do is to do the right thing, be a good person and carry it forward," Alisa McMorris said.