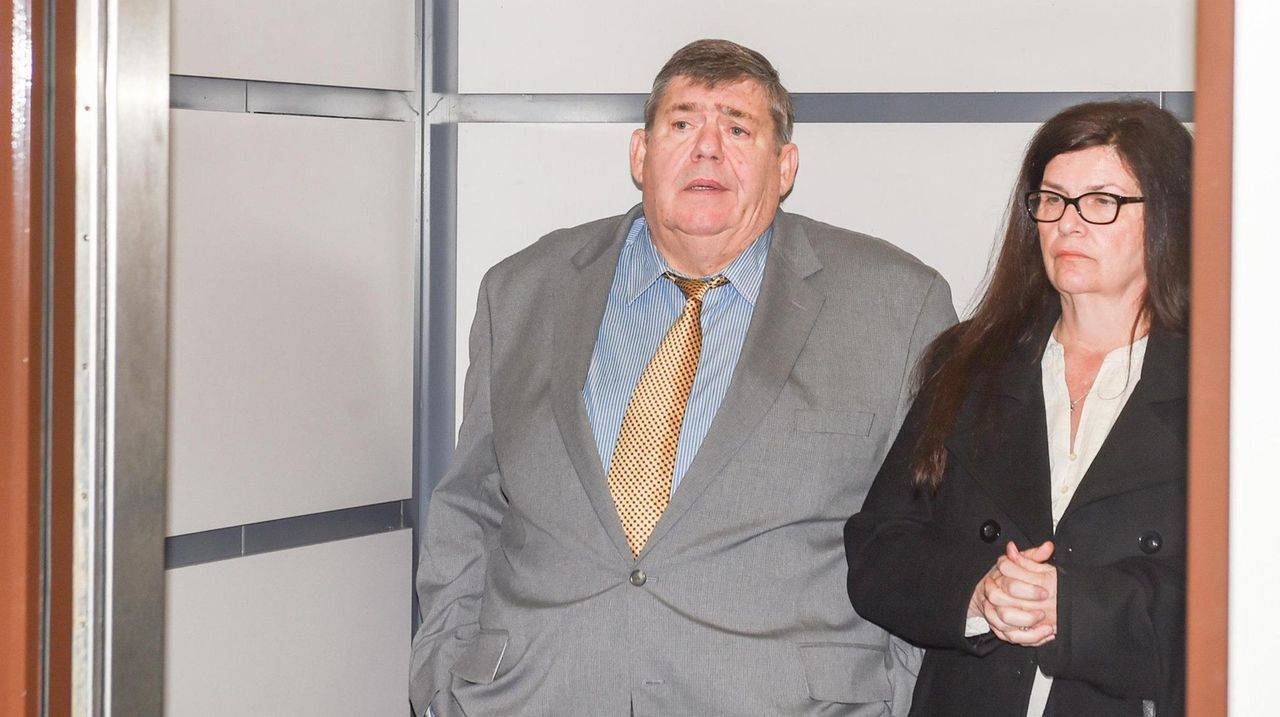 Opening arguments began in Riverhead on Tuesday in the trial of Thomas Murphy, 60, charged with driving drunk and mowing down a row of Boy Scouts on a hike after a morning of drinking vodka on a golf course. Murphy's attorney, Steve Politi, met with the media to talk about the defense. Credit: James Carbone; Photo Credit: McMorris family

A Holbrook man caused “a completely unnecessary and avoidable horror show" when he got behind the wheel after a morning of drinking vodka on the golf course and killed a 12-year-old boy by crashing into a group of Boy Scouts, Suffolk prosecutors said Tuesday.

But the defense attorney for Thomas Murphy described the Sept. 30, 2018, crash in Manorville as a tragic accident that was caused by a group of "poorly supervised" Scouts who wandered onto an unmarked section of roadway.

Supporters and family members of both the driver and the victims packed the Riverhead courtroom Tuesday as Murphy's trial began with heartbreaking details from the crash that killed Andrew McMorris of Wading River and injured three others.

Murphy has pleaded not guilty to a 16-count indictment charging him with aggravated vehicular homicide, assault and driving while intoxicated. If convicted, he faces 8 1/3 to 25 years in prison.

Assistant District Attorney Raymond Varuolo described the crash as a "nightmare" in which young bodies were left mangled after being sent airborne off Murphy's vehicle. He said Murphy, who disregarded offers from a golfing buddy for a ride home from the course, was alone responsible for the collision.

"This is a crash. It was not an accident," Varuolo said. "Accidents are avoidable. Accidents didn't have to happen."

"It's 407 days since that man took my baby's life, and today begins that awful journey into reliving the nightmare over and over again," McMorris told reporters.

Steven Politi, Murphy's defense attorney does not dispute that Murphy's 2016 Mercedes-Benz collided with the Boy Scouts from Troop 161.

But in his opening argument, Politi said prosecutors deliberately "omitted" key details from the case, including the absence of photos and videos from Murphy's interview with the police and conflicting details about the precise location of the boys. He contends the Scouts ventured into the middle of the road — which prosecutors deny — and that Murphy's vision was impaired not by alcohol but by the direction of the roadway and by another vehicle.

"This is an unimaginable tragedy," said Politi, who urged the jury of seven men and five women to disregard their instincts to sympathize with the victims. "But don't compound the tragedy by convicting an innocent man."

Politi told reporters that Murphy was "100 percent" not legally intoxicated at the time of the crash.

Prosecutors contend Murphy began downing vodka after arriving at the Swan Lake Golf Course in Manorville around 9 a.m., eventually foregoing the round to focus on drinking and shooting videos on his smartphone.

Varuolo said Murphy's golfing companion, a longtime friend, offered on two occasions to drive him home. But Murphy refused, rolling up the windows of his vehicle and driving off.

"As soon as he rolled up the windows, he sealed the Boy Scouts' fate," Varuolo said.

A mile and a half from the clubhouse, Murphy drove off David Terry Road and plowed into the Scouts who were on a 20-mile hike, "tossing them like a rag doll," Varuolo said.

Murphy’s first words after the crash, prosecutors said, was an expletive, followed by "I'm in trouble."

He refused a Breathalyzer test at the scene, prosecutors said, and when his blood was drawn hours later after a warrant was obtained, it registered 0.13 blood alcohol content. Forensic toxicologists estimate it was 0.19% at the time of the crash — more than double the legal standard of 0.08%. Politi contends Murphy passed a field sobriety test, which prosecutors deny.

McMorris died 14 hours after the crash while Thomas Lane, of Shoreham, his older brother Denis Lane and Kaden Lynch of Calverton suffered serious injuries. Politi said the specifics of the victim's injuries and their recovery are "not important and have no bearing on the facts of the case."

Murphy initially apologized for the crash and indicated he would take responsibility for his actions. But after Murphy changed attorneys, Politi was able to successfully exclude the statements from evidence.

Politi promised to present conflicting details of the crash, including a nearly 20-foot spot on the roadway near the crash without a fog lane that would protect pedestrians. He also contends that a lead detective in the case lives near families of two of the injured boys, creating a potential conflict of interest.

"This was never a fair investigation," Politi said.

The jury Tuesday also heard from a Suffolk police dispatcher and multiple 911 calls from Boy Scout leaders and passersby who frantically sought help. 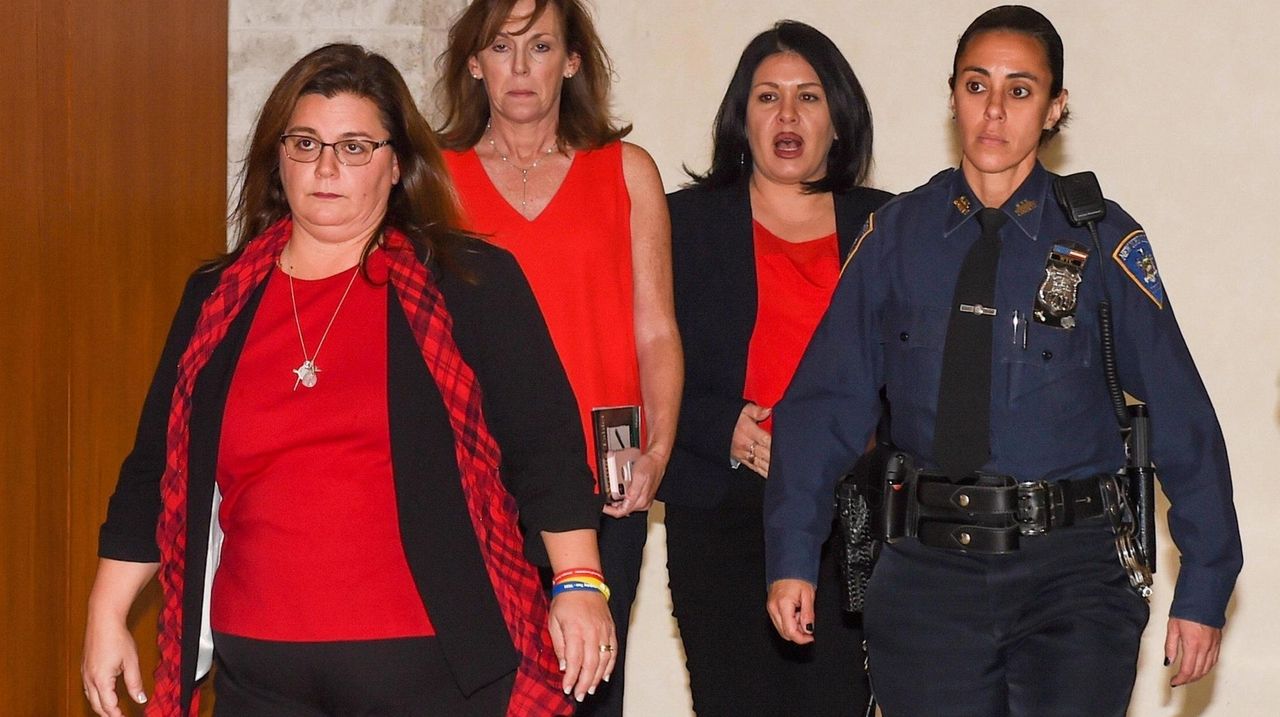 Listen to the 911 call from the Boy Scout trial Opening arguments began in Riverhead on Tuesday in the trial of Thomas Murphy, 60, charged with driving drunk and mowing down a row of Boy Scouts on a hike after a morning of drinking vodka on a golf course. This 9/11 call from the time of the incident was released to the media in attendance at court. Credit: SCPD

Anthony Higgins, 12, testified he was standing less than six feet from McMorris on the shoulder of the roadway at the time of the crash. He described being "stunned" and wishing he could have saved his friend.

During cross-examination, Politi responded that the seventh-grader was "close enough that you could have pulled him" from the oncoming car. The remark sparked audible gasps from the gallery.

The trial is expected to last up to five weeks.