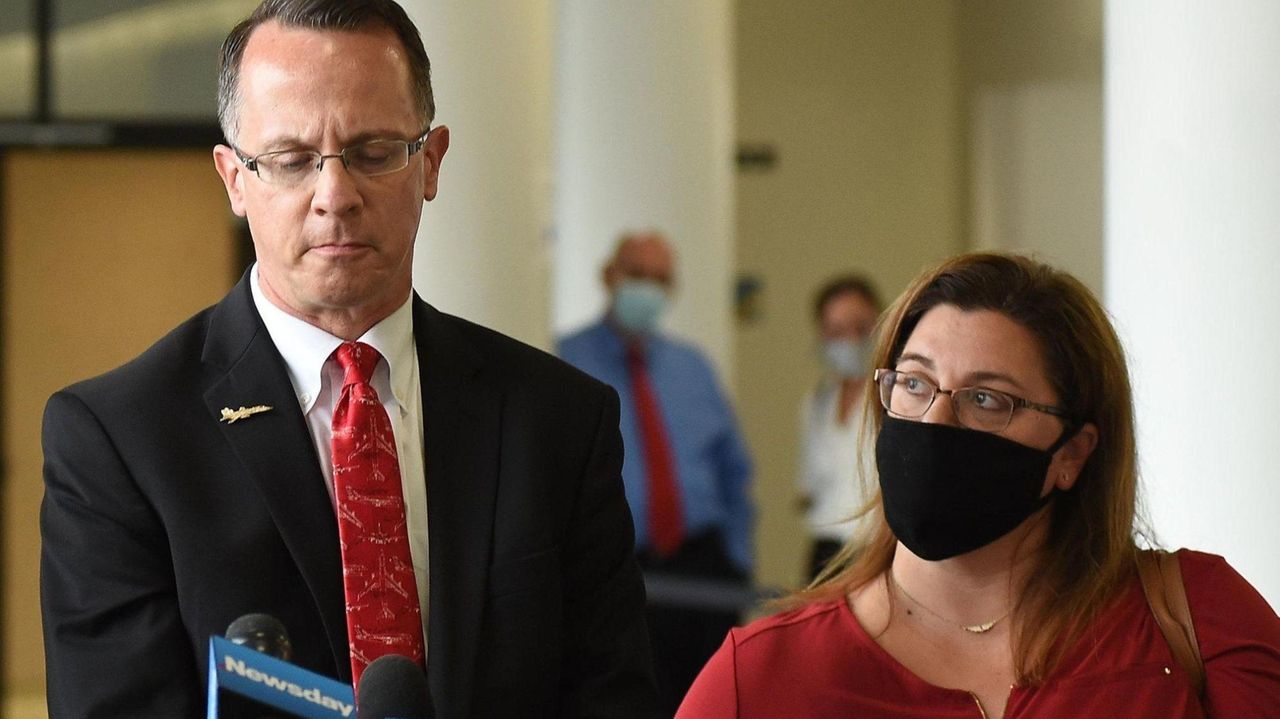 Juror misconduct hearings in the Thomas Murphy case continued in Riverhead on Thursday. Murphy's attorney, Steven Politi, says he just wants to protect the rights of his client, but the parents of slain Boy Scout Andrew McMorris say Politi is attempting to "muddy the waters." Credit: Howard Schnapp

Seven jurors in the 2019 trial of a Holbrook man found guilty of driving drunk and crashing into a group of hiking Boy Scouts in Manorville — killing a 12-year-old boy — testified Thursday that they were unaware of any misconduct or inappropriate conversations among fellow jury members before the start of deliberations.

One juror recalled a handful of instances where his colleagues had instructed other jury members not to discuss the case, although he could provide no details about the nature of those conversations.

Nine months after convicting Thomas Murphy, 61, of nine charges for his role in the Sept. 30, 2018, crash that killed Andrew McMorris, a seventh-grader from Wading River, jurors returned to Riverhead court Thursday to address concerns that members of the panel had violated instructions by State Supreme Court Justice Fernando Camacho not to discuss the case before deliberating.

"We just want to know the truth and what happened," said Steve Politi, Murphy's defense attorney. "And at this juncture, it appears many of the people have seen others speak about the trial testimony but not one juror has yet to come in and be the juror who was actually speaking about it. So that raises some eyebrows about who is telling the truth here … Someone is lying. Someone is not telling the truth."

John McMorris, Andrew's father, a Scout leader who was on the hike and held his injured son on the side of the road, said the defense is "muddying the waters" to distract from the facts of the case.

"Let's not forget this man was drunk," he said. "He got into his car when he had a chance not to. He didn't have to drive drunk. And he plowed into the Boy Scouts, killing my son. Lets not forget about that. This jury misconduct is just a deception. He's muddying the waters. He's trying to divert the attention away. Lets not forget about Andrew. He deserves that."

Prosecutors contend Murphy spent hours before the crash drinking vodka at the Swan Lake Golf Club in Manorville with three friends before getting behind the wheel of his white Mercedes SUV. Roughly a mile from the golf course, Murphy crossed a white fog line and crashed into the Scouts, who were on a 20-mile hike, prosecutors said.

Prosecutors are seeking the maximum penalty of 8 1/3 to 25 years in prison.

On Wednesday, three jurors testified to potentially problematic conduct among jury members. They include one member who reportedly admitted reading a newspaper account of the case — in violation of Camacho's orders — although that juror later denied the allegation.

Two others testified Wednesday to hearing jurors making passing remarks about witnesses testimony, prompting other jury members to shut down those conversations.

On Thursday, Politi called five deliberating jurors and two alternates. None of the jurors admitted any improper conduct or provided any substantive details about conversations held by their colleagues.

One male juror who had a background in science denied allegations, raised on Wednesday by another juror, that he had attempted to discredit the testimony of a defense witness. And a female juror denied suggestions, also raised on Wednesday, that she quieted jury members who were improperly discussing aspects of the trial.

A day after Politi was held in contempt for failing to comply with Camacho's orders, the lawyer came under fire again — this time in an affidavit written by a juror who questioned the tactics used by the defense attorney and Joseph Cornetta, his private investigator.

The letter, which was held under seal but discussed in open court, stated that Politi and Cornetta complained to the juror about how the trial had been unfair to his client and that Murphy would likely die in prison if his conviction was not overturned.

Politi responded: "Everything we did was above board … Nothing improper was done at any point or time."

Three more jurors are expected to testify Friday while another juror, who was prevented from entering the courthouse Wednesday because of COVID restrictions, will testify Sept. 29 — one day shy of the second anniversary of the fatal crash.

Jurors testify hearing fellow jurors discuss Boy Scout's death before deliberationsNone of the jurors admitted any improper conduct or that the utterances of their colleagues had effected Thomas Murphy's guilty verdict. Sentencing in Boy Scout's death postponed amid jury misconduct allegations and potential new evidenceSteven Politi, attorney for Thomas Murphy, said four jurors alleged in sworn statements that they discussed the case among themselves before deliberations had begun. Driver guilty on all counts in Scout's deathA jury convicted Thomas Murphy of driving drunk on a Manorville road last year and crashing into a group of Boy Scouts, killing Andrew McMorris, 12.