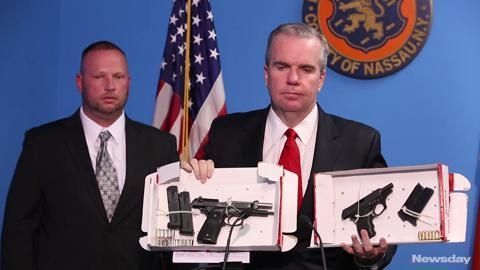 Nassau's acting Police Commissioner Thomas Krumpter said on Thursday, Dec. 10, 2015, that "the Nassau police may have adverted an air disaster" by arresting Breen Peck, 52, an air traffic controller assigned to a post in Westbury. He was found with two illegal handguns and crystal methampethamine when police stopped his vehicle at 10:10 p.m. Dec. 9 in Wantagh for illegal window tint and for failure to signal, authorities said. (Credit: Newsday / Jessica Rotkiewicz)

An air traffic controller assigned to a Westbury facility that guides flights in the New York metro area was arrested Wednesday night on drug possession and weapons charges during a traffic stop in Wantagh, Nassau County police said.

Breen Peck, 52, of Redkey, Indiana, was arrested after officers from the Criminal Intelligence Rapid Response Team found him with two illegal handguns and crystal methampethamine when they stopped his 2010 Toyota FJ Cruiser on Byron Street, near Willow Street, at 10:10 p.m. for illegal window tint and for failure to signal, police said.

During the stop, Peck, who also has a Wantagh address, informed officers there was “a loaded handgun behind his driver’s seat” and another in a rear cargo area, police said.

“That’s meth, I smoke it to stay awake, I’m an air traffic controller,” Peck told police, according to court documents.

Nassau police “may have averted an air disaster in the skies above Nassau County” by arresting Peck, said Krumpter, who added Peck had been employed by the FAA since 1991.

At his arraignment yesterday in First District Court in Hempstead before Judge Frank A. Doddato, Peck was ordered held on $12,500 cash bail or $25,000 bond.

Peck, who was represented by Legal Aid, is due back in court on Monday.

The Federal Aviation Administration website identifies Breen Peck as an air traffic control specialist working at TRACON in Westbury. That center controls flights into and out of Kennedy, LaGuardia, Long Island MacArthur, and Republic airports, among others.

It was not clear if he had worked on the day of his arrest or was scheduled to work.

FAA spokeswoman Arlene Salac said he was currently “in training,” but would not explain what that meant. She also would not say whether the agency employed more than one controller named Breen Peck.

The FAA refused to say whether he was the same Breen Peck who reportedly once misdirected a flight carrying First Lady Michelle Obama into the “potentially dangerous turbulence” of a military transport plane.

But The Washington Post yesterday reported that Peck was the same man responsible for the April 2011 incident, as well as an earlier mistake that “nearly caused a collision” a year earlier involving a United Airlines flight carrying Rep. F. James Sensenbrenner Jr. (R-Wis.).

With William Murphy and Darran Simon