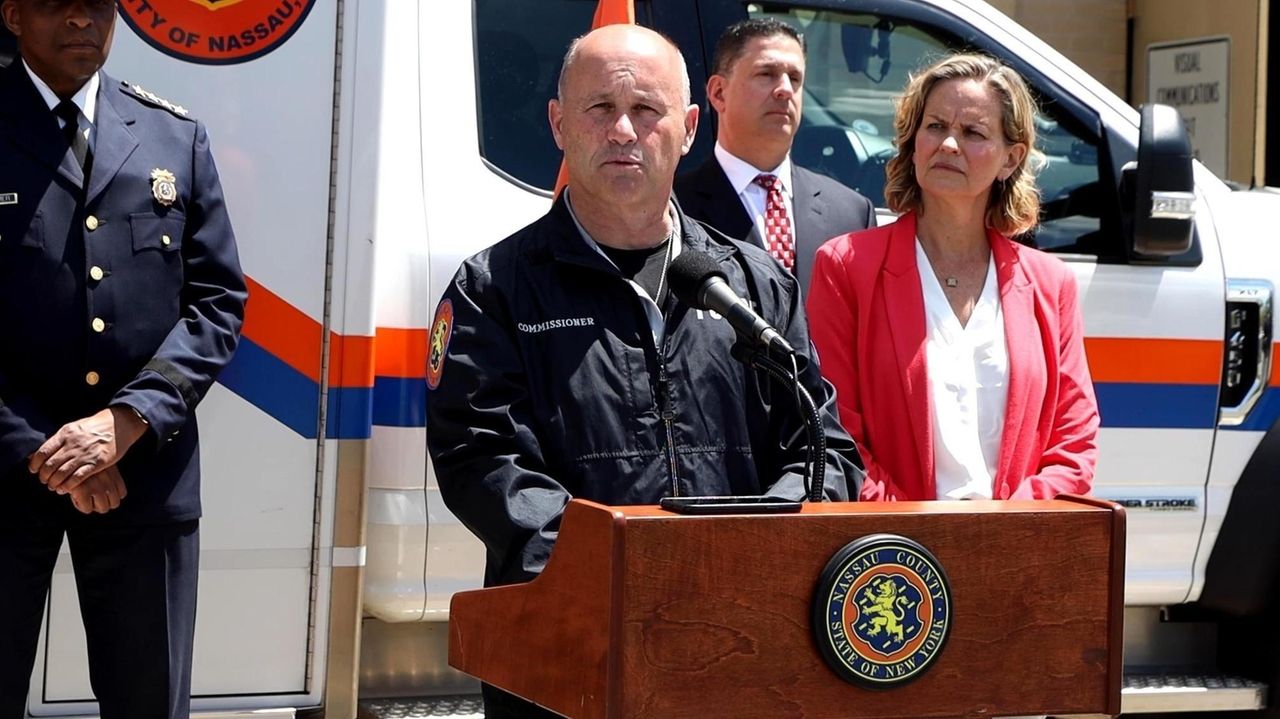 Bradley Goldberg, 47, was taken into custody for allegedly making "a pattern of threats" against members of the Jewish community, including rabbis and Nassau police employees, police said Thursday at a Mineola news conference. Credit: Howard Schnapp

A Cedarhurst accountant engaged in a pattern of harassment and threats against law enforcement and members of the Jewish community, Nassau County Police Commissioner Patrick Ryder said Thursday.

Since March 2020, Bradley Goldberg, 46, of Oakland Avenue, made more than 1,000 harassing calls to officers and detectives from the Sixth Precinct in Manhasset, to Jewish community leaders in Port Washington and Great Neck and to lawyers who handled his earlier criminal cases, according to Ryder and criminal charging documents.

Goldberg, a forensic certified public accountant, was arrested early Tuesday morning at the intersection of Rockaway Turnpike and West Broadway in Cedarhurst without incident.

Goldberg was arraigned Wednesday where bail was set at $50,000 bond or $25,000 cash. He has an outstanding warrant in New Jersey for similar charges and was expected to be taken to the Garden State to face charges as early as Thursday.

"This individual has put a daily strain on the performance of our department," Ryder said at a news conference in Mineola, adding that Goldberg has provided no motive for the calls. "If our members are answering these phone calls and trying to run down these leads, they are not going after the crimes we have going on every day that we want to investigate."

Charging documents indicate that several of the Jewish leaders identified Goldberg as a "former acquaintance." Other victims included attorneys who handled his previous criminal cases and an individual who currently lives in a home Goldberg once occupied.

David Adhami of Great Neck, Goldberg’s defense attorney, said he looks forward to going through the judicial process with his client, who denies the allegations. He declined to comment further.

Goldberg has eight prior arrests including second and third-degree assault, hate crimes, aggravated harassment, stalking, obstructing governmental administration, criminal contempt and menacing, Ryder said. The commissioner did not say how the past arrests were resolved.

Nassau County Executive Laura Curran said the county has "zero tolerance for this kind of harassment and these kinds of threats."

Goldberg made hundreds of calls to police, including more than 100 to the Sixth Precinct in a single night, Ryder said.

Ryder said he told one officer that he would "follow you home" and on another occasion informed a cop that: "I am at your mother's house. I know every detail about you."

On April 19, 2021, Goldberg, who identified himself in the calls, said "my new goal is to have one of the Sixth Precinct officers blow their brains out and I want to see the body as proof," charging documents state.

Goldberg is due back in court in Nassau on Friday.