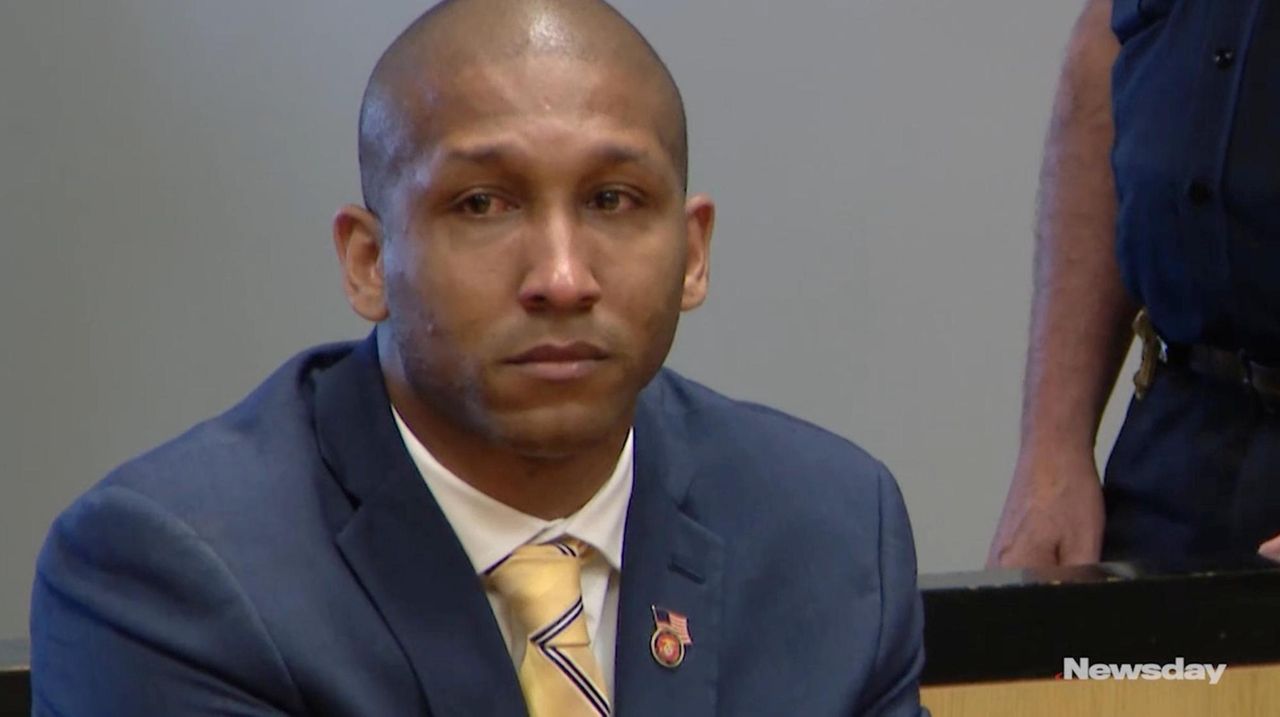 State Supreme Court Justice John Collins dismissed arson charges against Weldon Drayton Jr., 35, and Stephen Hernandez, 25. They were accused of torching abandoned houses in Central Islip so they could be among the first to respond to the fire station and the fires, to build credibility within the department.  Credit: James Carbone & News 12

State Supreme Court Justice John Collins dismissed the charges against Weldon Drayton Jr., 35, immediately in the interest of justice, as the jury listened. He ruled that charges against co-defendant Stephen Hernandez, 25, will be dismissed in six months if he stays out of trouble.

Drayton, a former combat Marine and Suffolk police officer suspended because of his arrest, will seek reinstatement to his job, said his attorney, Stephen McCarthy Jr. of Manhattan. Hernandez, who was accepted into the Fire Department of New York City, now can begin his career there as an emergency medical technician, said his lawyer, Steve Politi of Central Islip.

Later, outside of the courthouse in Riverhead, Drayton said, "I'm just glad it's over, and I can move on with my life."

The two men were accused of torching abandoned houses in Central Islip so they could be among the first to respond to the fire station and the fires, to build esteem within the department.

The trial had been marked by evidence withheld by prosecutors, but Chief Assistant District Attorney William Ferris said in court that the motivation to pull the plug on the case was the inconsistent testimony by cooperating accomplices and detectives, much of which was not corroborated by other evidence.

Before the case began, Collins took the unusual step of having the jury hear the legal arguments for dismissal, and allowed cameras to be present, which is rare in New York state jury trials. "The coverage has been relatively extensive, at least in print," Collins said.

Jurors said later they were glad they could watch and thought it was the right outcome, as they said they were likely headed for an acquittal anyway.

"I just hope the district attorney never has to defend me, because the evidence that was brought forth was not good," jury forewoman Ashley Donohue of Patchogue said. "I was questioning why is this even a case."

Another juror, Amber McNamara of Northport, ridiculed the prosecution theory that Drayton and Hernandez set the fires so they could "get salty" — firefighter slang for responding quickly and getting filthy while seeing action.

"I don't think someone who goes overseas to defend our country has to get salty," she said.

The judge said the resolution was appropriate, because prosecutors were not proving their case. "I believe their case would not have survived deliberation by 12 reasonable people," Collins said.

The agreement to dismiss the charges came together over the weekend, after McCarthy, Politi and Politi's co-counsel, Caroline Mayrhofer of Hauppauge, bypassed the trial prosecutors to talk to Ferris and Howard Master, special counsel to District Attorney Timothy Sini.

In court, as trial prosecutors Andrew Weiss and Luigi Belcastro sat by, Ferris told jurors and Collins that the office realized the case had to end after Thursday's testimony, in which Alfredo Laureano testified he set one of the fires with the defendants — but also admitted being a crack dealer and a gang member, and then urinated on himself and the witness stand during cross-examination by the defense attorneys.

"It did not proceed as we expected," Ferris said, referring to the case as a whole. "We decided we needed to resolve this matter and not have it go any further. … The issue here is not just to secure a conviction. The issue here is to do justice."

Ferris and Master did not address the evidence prosecutors had withheld in an apparent violation of legal and ethical rules.

Defense attorneys said problems with the case were inevitable because their clients were innocent.

McCarthy praised Collins for how he presided over the trial and thanked prosecutors for ultimately making the right decision.

Politi and McCarthy noted that their fire chief, Patrick Murphy, testified against them, as did another firefighter, Austin Lehman, who admitted setting fires.

"I told them they should not be part of any organization with leadership like that," Politi said, as Drayton and Hernandez both nodded.

The Central Islip Fire Department’s attorney, Christopher Clayton, said: “The board of fire commissioners will not publicly discuss particular personnel matters due to privacy and confidentiality concerns."

Another juror, David Bolatin of Commack, said the "wrong people were on trial."

"I think justice was really done today," said one juror who declined to give her name. "I feel sorry for everyone involved."

Outside the courthouse, Drayton and Hernandez hugged their families, friends, attorneys and, eventually, the jurors.

The former defendants left the courthouse as a light drizzle began to fall and went to have lunch with their attorneys and most of the jurors.