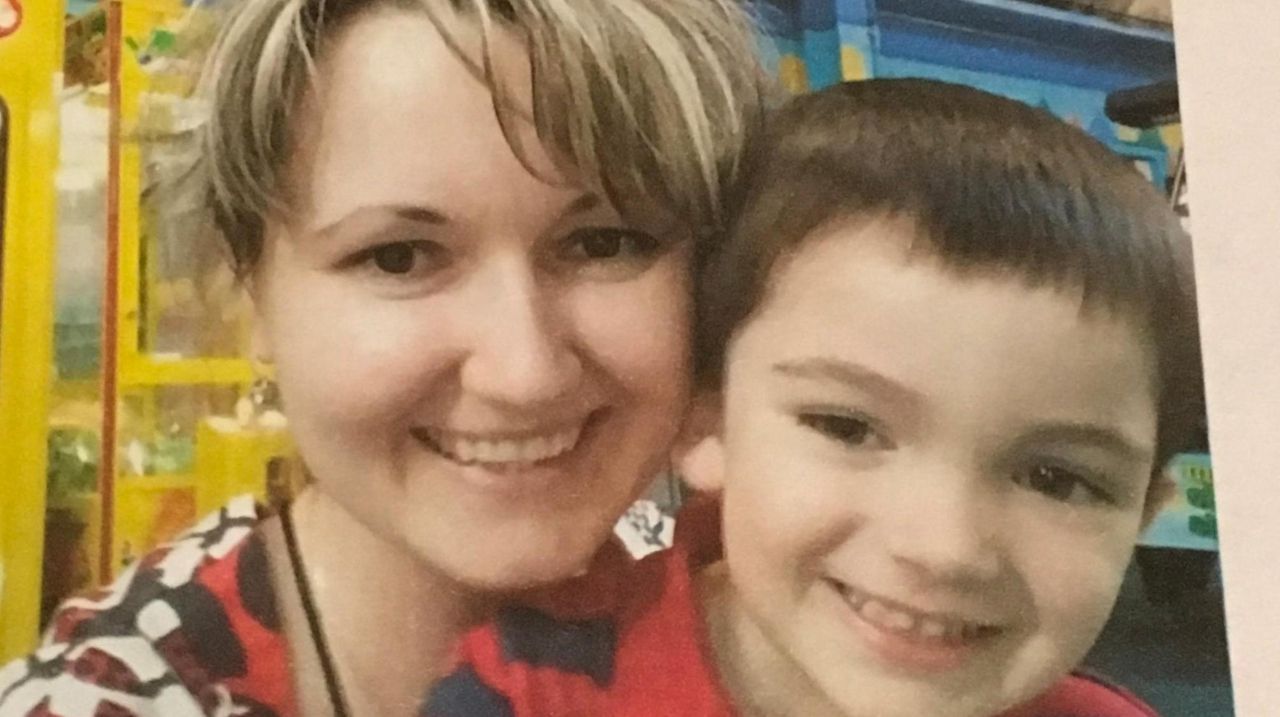 The father of an 8-year-old boy who died last week and the man's fiancee have been arrested and charged in the child's death, police said. Credit: Newsday / Cecilia Dowd; James Carbone; Stringer News Service

The NYPD officer and his fiancee who were charged Friday with killing the man's 8-year-old son at their Center Moriches home last week, discussed the boy's physical suffering on the morning he died but didn't help him, authorities said.

Michael Valva, 40, and Angela Pollina, 42, both of Bittersweet Lane in Center Moriches, were arrested Friday morning and charged with second-degree murder in the Jan. 17 death of Thomas Valva, who authorities said died from hypothermia.

"They knew he was suffering from hypothermia and they failed to get him any help," Suffolk Assistant District Attorney Laura Newcombe said at the defendants' arraignments late Friday.

The boy's internal body temperature, taken at the hospital where he died, was just 76 degrees, authorities said. Two nights before Thomas' death, he and his brother, Anthony, 10 — both on the autism spectrum — were forced to sleep on the bare concrete floor of their home's unheated garage, when temperatures dipped to 19 degrees outside, authorities said.

Prosecutors, citing video surveillance from the home showing the boys shivering and without blankets or pillows, said a camera pointed toward the floor of the garage was labeled "kids room," indicating the garage served as their bedroom.

"Not only did they fail to render any type of meaningful aide, they lied to the police officers, they lied to the EMTs. This is one of the worst crimes I've ever seen," said Sini, who was flanked by several Suffolk police detectives who worked around the clock investigating the case.

“Thank God the justice is being served,” said Zubko-Valva through tears Friday morning.

A correction officer on Rikers Island, Zubko-Valva, 36, of Valley Stream, said she had not seen her children for two years before Thomas' death partly due to false allegations her estranged husband filed against her amid contentious divorce proceedings. She said her three sons — Anthony Thomas and Andrew, 6 — had suffered physical abuse for years at the hands of their father and Pollina.

Michael Valva and Pollina “engaged in conduct which created a grave risk of death to this child," Hart said.

"We are still investigating the extent of the abuse and if it extended to all the children," said Hart, who said Pollina's three daughters — 11-year-old twins and a 6-year-old — lived at the home.

Frances Pierre, commissioner of Suffolk County's Department of Social Services, said in a statement that the department had investigated the Valva/Pollina family after child neglect petitions were filed in 2018. Pierre did not say who filed the complaints or what was alleged, but said a judge ordered home supervision for a year and orders of protection for the parents to "refrain from harmful behaviors towards the children" and mandated parenting classes.

"Subsequent to the expiration of the order of protection, CPS investigated additional complaints relating to the family," Pierre said. "DSS is formally reviewing the management of the case to ensure that all protocols were followed in accordance with the law."

At their arraignment Friday afternoon, Valva, an NYPD transit officer, and Pollina, who previously worked for 17 years in operations for a Manhattan hospital, pleaded not guilty. District Court Judge Edward Hennessey ordered the two held without bail, saying the pair were potential flight risks.

When police responded to a 911 call from the pair, who were on speakerphone, at their home on Jan. 17 at 9:42 a.m., they said the boy had fallen in the driveway as he went to catch his school bus, said Newcombe.

But Hart said earlier, “We have determined that Thomas was never in the driveway that morning and he suffered head and facial injuries that were not consistent with the father’s account."

When an EMT arrived at the home, Valva was performing CPR on the boy. The EMT found "Thomas was cold to the touch," Newcombe said.

Thomas had abrasions on his face that prosecutors believe were a result of him falling on the concrete floor of the garage, Newcombe said, but the defendants told the EMT that the boy had hit his head on a door jam.

Under questioning by Suffolk police detectives, Pollina provided the username and password for an extensive video and audio surveillance system inside and outside the defendants' home, but as detectives reviewed the videos, the password was changed and videos were deleted, Newcombe said.

But Newcombe said police listened to an audio recording from Jan. 17, the morning of Thomas Valva's death, which began with another child in the home asking: "Why can't Thomas walk?"

According to Newcombe, Pollina answered "because he's hypothermic," adding: "When you're washed with cold water and it's freezing you get hypothermia."

Valva's voice then said, according to Newcombe: "He keeps face planting on the concrete."

And then Valva said, according to Newcombe: "Because he's cold, boo-[expletive]-hoo."

Pollina then asked Valva what he was doing, and according to Newcombe, he answered: "I'm [expletive] suffocating him, that's what I'm doing."

Pollina told him, according to Newcombe: "Get your hand off his mouth, there's people everywhere."

Tuohy said prosecutors were relying on "speculation and conjecture," and attempted to cast doubt on the relevance of the video evidence referenced by Newcombe, saying it was purportedly recorded "a few days before" the boy died.

"They're just solely pointing the finger at both of these individuals and blaming them for a tragedy," Tuohy said, adding that he had not yet reviewed any of the boy's medical records or other evidence.

Michael Valva has been suspended without pay, according to NYPD Det. Sophia Mason, a department spokeswoman. Valva joined the NYPD in 2005.

East Moriches school district Superintendent Charles Russo, in a statement, said, "We continue to extend our deepest sympathies to the family and friends of Thomas Valva. Thomas was a tender, loving boy who made tremendous gains during the short time he was a student in East Moriches.

"While the district legally cannot comment on any specific case, it aggressively reports to the proper authorities child abuse when it is suspected."

Following the boy's death, Zubko-Valva was granted temporary custody of her two boys at an emergency family court hearing Wednesday.

Gary Rosenthal, an assistant county attorney for CPS, said during the hearing that past allegations made against Zubko-Valva were "dismissed against her and she was found to be credible."

"The children have lost one of their siblings," Suffolk Family Court Judge Frank Tantone told the mother during the hearing. "Therapy is critical in this case."

Zubko-Valva said the reunion with her two sons would be bittersweet.

"It shouldn’t get to the point that a child has to die for the justice to be served. So I am heartbroken that I’m only picking up my two children, instead of three of them. But I’m so thankful that they’re going to be safe tonight. I’m so thankful.”

Mother of 8-year-old boy 'heartbroken' over his 'cruel and tragic death'Justyna Zubko-Valva is grateful for the public's support following the alleged murder of her son Thomas Valva at her estranged husband's home in Center Moriches last week.