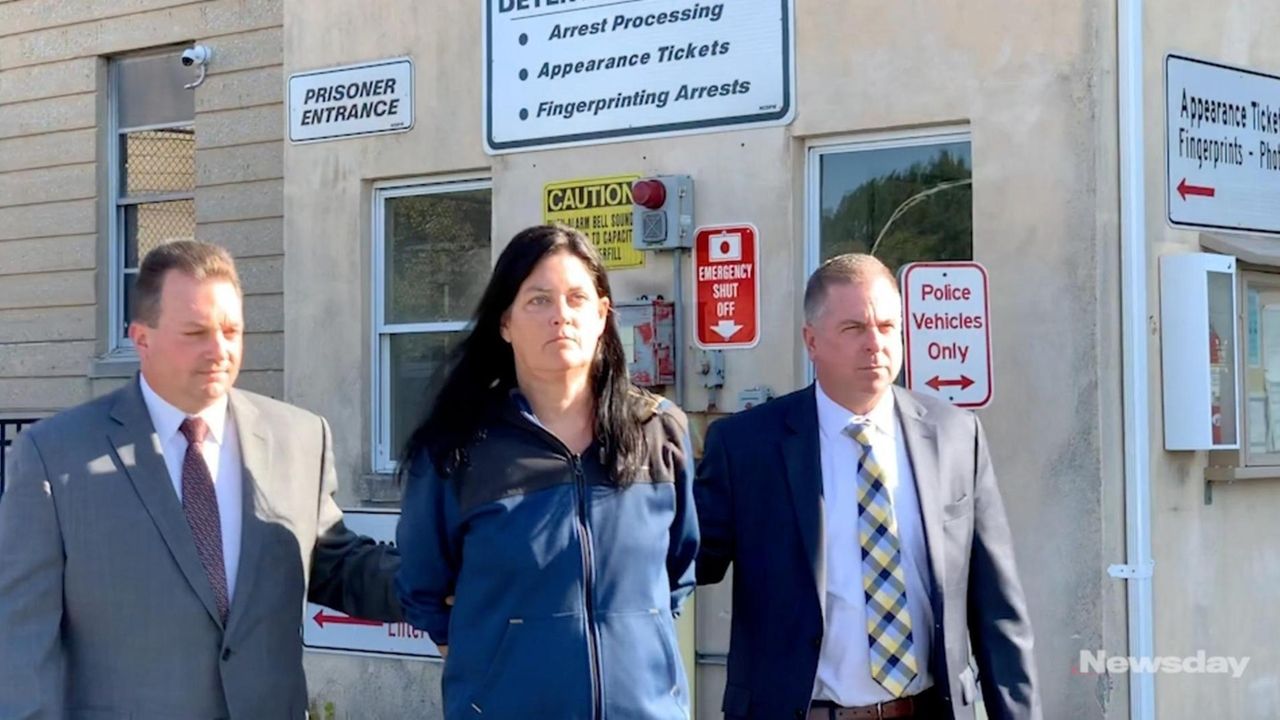 Jennifer Gross, 54, was arrested and charged Friday, Sept. 20, 2019, with one count each of second-degree murder and second-degree arson linked to a Nov. 20, 2018, house fire in which James M. Coppola, 75, was found lifeless near the Centre Island home’s front door, officials said. Credit: Newsday / Howard Schnapp

A Long Beach woman beat a man she was romantically involved with to death and set fire to a Centre Island house to cover up the crime, according to police.

Jennifer Gross, 54, was arrested and charged Friday with one count each of second-degree murder and second-degree arson linked to the Nov. 20, 2018, house fire in which James M. Coppola, 75, was found lifeless near the home’s front door, officials said.

Gross had been involved in a nearly 20-year relationship with Coppola, of Centre Island and Howard Beach in Queens, that included violence and “stealing of money,” Nassau County Det. Lt. Stephen Fitzpatrick said at a news conference Saturday.

Gross confronted Coppola for money at the house, which he and several family members occasionally used during the summer. The argument developed into a "physical altercation," Fitzpatrick said. Gross then used a pot or a pan to beat Coppola and lit the house on fire with an accelerant to cover her tracks. She fled the scene in a taxi.

Fitzpatrick said Gross had been "on our radar" throughout the investigation but when she pawned the jewelry Coppola wore the night he was killed, "obviously it pointed to her."

Gross had fought with and stolen items from Coppola in the past, according to Fitzpatrick. They also had a "current court case that was pending" and Coppola had an order of protection against Gross, Fitzpatrick said.

Gross was married to former Nassau County Court Judge David Gross, who was caught up in a mob money laundering scheme and in 2007 was sentenced to 33 months in prison. He admitted in federal court that he conspired with an accused mobster to launder more than $400,000 in proceeds from stolen jewelry.

The former judge also made headlines in 2000 when a neighbor complained that he showered nude in his Long Beach backyard with his two young children. Police said he said he sprayed a responding officer with a garden hose thinking he was a peeping Tom. No charges were filed.

She last worked at a dry cleaner, was self-described as homeless and was relying on money from Coppola and others, Fitzpatrick said.

"In this particular case, when she didn't get her money she wanted, she beat him and killed him," Fitzpatrick said.

Gross was arraigned Saturday at First District Court in Hempstead. She pleaded not guilty, police said.

Before her arraignment, she said the "truth will come out in court."

Gross was ordered held without bail with her next court appearance set for Tuesday. A court website Saturday did not list an attorney for her.