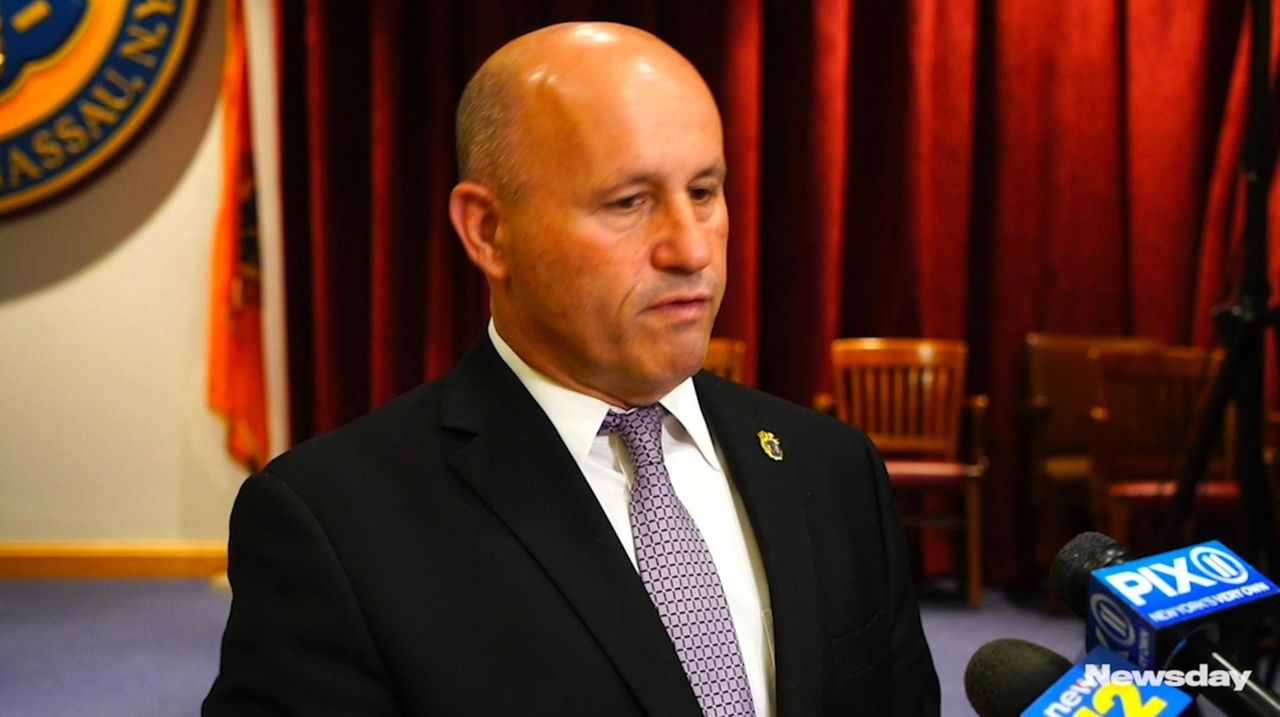 On Monday, Nassau County Police Commissioner Patrick Ryder said his police force is ready when the verdict is handed down in the Derek Chauvin trial, if any protests pop up in Nassau County. Credit: Newsday / Chris Ware

Law-enforcement officials on Long Island and in New York City are preparing in the event of protests after the verdict in the Derek Chauvin trial is announced by beefing up security, sharing intelligence and coordinating resources.

Nassau Police Commissioner Patrick Ryder said officials from his department will meet with representatives from the NYPD, the Suffolk County Police Department and other Long Island agencies on Tuesday to prepare for a verdict.

"We are going to get a little of a lead time when the jury has handed down their decision," Ryder said, adding that the department has been in contact with the FBI and other big city police departments. "We are not going to know guilty or innocent, but we'll know to get ready to hand down the decision."

"We are in a position where we have the officers ready to respond very quickly," said Shea. "[Chief of Department] Rodney Harrison and the team have been drilling for this--table top exercises--we have a large amount of officers, both deployed and on reserve and we think we will be able to move those officers around."

Ryder said he does not anticipate any problems in Nassau County after the jury decides the fate of Chauvin, a former Minneapolis police officer charged with second-degree murder, third-degree murder and second-degree manslaughter in the death of George Floyd in May 2020. The case went to the jury Monday afternoon.

"Hopefully, the verdict comes out and it is a peaceful day," Ryder said Monday in Mineola.

The NYPD and other police departments have been accused of using excessive force during the wave of protests that erupted across the country after Floyd’s death, while some protesters in New York and other communities set fires, smashed windows and looted stores.

Ryder said there have been more than 300 protests involving 60,000 people in Nassau County since Floyd’s death, and he said the department’s job is to protect the participants' First Amendment rights while keeping order. "Very few arrests, no violence, no criminal mischief, so we’ve done very well so far," Ryder said.

Suffolk police officials said the department is not aware of any planned protests.

"Our department supports the rights of our residents to peacefully protest a cause as we have demonstrated during the past year as we policed 268 events with thousands of participants," the department said in a statement. "Officers are prepared to intervene to prevent unlawful activity that could cause injuries or property damage."

Shea said last week that his department has been preparing for nearly a year for the possibility of large-scale protests. Officers have been told they are prohibited from taking unscheduled days off.

"The NYPD works around the clock to keep New Yorkers safe," said Sgt. Edward D. Riley, a department spokesman. "The department has prepared for this for many months and has examined, adapted and adjusted our response to the protests. This includes more training for police officers in protecting and facilitating demonstrations and marches, and also examining which units within the department we can utilize more, such as community affairs."

Ramadan, the month Muslims dedicate to prayer and sacrifice, began on April 12, Ryder said, and the department has boosted security at Nassau mosques to ward off anti-Islamic violence.

The commissioner said the month of April is especially concerning for law-enforcement officials because many infamous mass shootings and terrorist attacks — Columbine, Virginia Tech, the Oklahoma City bombing, the Boston Marathon bombing — have occurred during the month. Some of those attacks were meant to commemorate Adolf Hitler’s birthday, April 20.

"These kids today, these lone wolves, they get all worked up over what they get on the internet," Ryder said. "They get fed stories, truth and mistruths, and it gets people worked up."

Ex-cop Derek Chauvin guilty of murder in George Floyd caseThe verdict — guilty as charged on all counts, in a relatively swift, across-the-board victory for Floyd's supporters — set off jubilation mixed with sorrow across the city and around the nation. Feds weighing how to respond after upcoming verdict in Chauvin trialThe Biden administration is privately weighing how to handle the upcoming verdict in the trial of former Minneapolis Police Officer Derek Chauvin, including considering whether President Joe Biden should address the nation and dispatching specially trained community facilitators from the Justice Department, aides and officials told The Associated Press. More coverage: Derek Chauvin trial in the death of George FloydNewsday's complete coverage of George Floyd's death, the subsequent protests and the trial of former Officer Derek Chauvin.