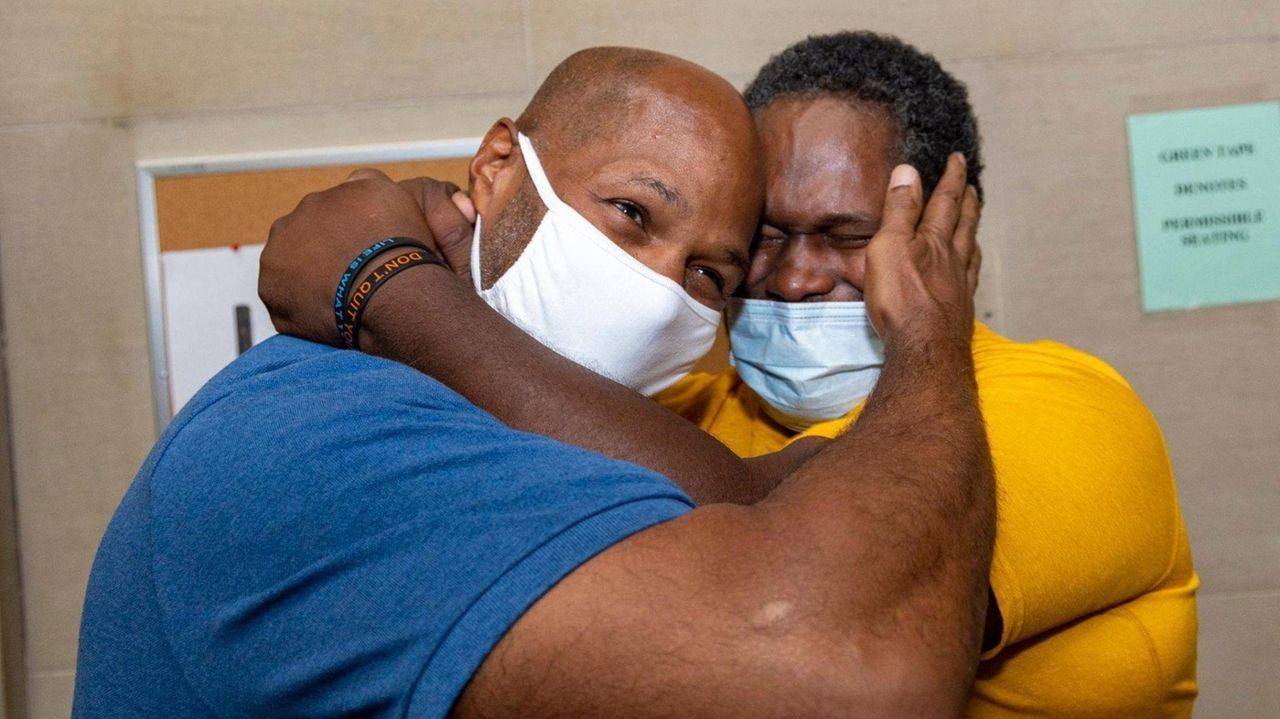 More than 30 years behind bars ended Monday for a Hempstead man, Christopher Ellis, when a judge released him after finding authorities withheld exculpatory evidence during his trial in the 1990 slaying of a Hofstra University assistant football coach. Credit: Newsday / Reece T. Williams

More than 30 years behind bars ended Monday for a Hempstead man after a judge found authorities withheld exculpatory evidence during his trial in the 1990 slaying of a Hofstra assistant football coach.

Acting State Supreme Court Justice Patricia Harrington ordered a new trial for Christopher Ellis, 51, who hugged his wife before walking out of a Mineola courtroom for his first taste of freedom in decades.

Prosecutors said they haven't decided whether to retry him for the slaying.

Ellis had been serving a sentence of 31½ years to life in prison following a jury conviction of him in 1992 on charges that included second-degree murder and attempted robbery in the slaying of Joseph Healy, 25.

"I’m not going to show any remorse because I didn’t know him and I didn’t do it," Ellis said decades ago at his sentencing. "I’m going to fight this if it kills me."

The newly-freed man was exuberant outside Nassau County Court on Monday, celebrating with family that included his son Christopher Ellis Jr., 30, who was an infant at the time of his arrest.

"I feel wonderful," the elder Ellis remarked about a day he said he always knew was coming but "didn’t think would take this long."

He also acknowledged that the defense team’s quest isn’t over as they wait to see if Nassau prosecutors will agree to dismiss his murder indictment.

"We still have a way to go," Ellis added before his supporters mobbed him with more hugs and he left with a plan to get ice cream.

Ellis’ attorney, Ilann Maazel, alleged that police hid evidence and coerced confessions during the investigation. He thanked Harrington for throwing out what he called "an unjust conviction."

The judge wrote in her July 22 ruling that notes from a detective's memo pad that weren’t turned over to the defense before Ellis’ trial gave information about "at least two identifiable people who claimed to have committed the murder."

The notes, which by law should have been disclosed, would have provided leads for more admissible evidence and potential witnesses, according to the judge.

"The failure to disclose it severely erodes the public’s sense of justice in this case," Harrington wrote.

Nassau district attorney's office spokesman Brendan Brosh said in a statement Monday that his office's Conviction Integrity Unit found the detective's notes in the Nassau County Police Department's case file — notes that weren't in the district attorney's files — and then disclosed them to the defense.

Brosh said his office "has no basis to believe that the failure to disclose the notes was intentional, or that the prosecutor was even aware of their existence."

Harrington's decision said prosecutors uncovered the notes after they began reexamining the case in response to a 2019 defense filing.

Healy was shot in the heart outside an Arby’s fast-foot restaurant near Hofstra’s campus while eating sandwiches with friends at about 2:30 a.m. on Sept. 29, 1990, in what Nassau police believed was a robbery attempt.

Healy was taking graduate business classes at Hofstra while also working as a coach after previously graduating from the University of Connecticut, where he played football, and briefly working on Wall Street.

Four months after Healy’s slaying, police arrested Ellis, then 20, along with David Lyles of Freeport, then 19, and Gary Lawrence of Hempstead, then 20, on murder charges. Police nabbed the trio during a Freeport drug sting and said they then recognized two of them from composite sketches of the culprits from the shooting.

Before the arrests, police had no positive leads after tracking 300 tips and distributing more than 1,500 of the sketches, even after Healy’s family and a Hofstra alumni club offered a combined $15,000 reward for information leading to an arrest and conviction.

The prosecution later contended at Ellis’ trial that he had been driving a getaway car, that Lyles had been the shooter and that Lawrence acted as the lookout.

Ellis’ former attorney, Dennis Lemke, who was in court Monday, said during Ellis’ trial that a confession police got from Ellis was coerced 15 hours after his arrest and that Ellis gave it because "he was promised that by doing so he wouldn’t be targeted as the triggerman."

But case prosecutor George Peck, who went on to become a judge and died in 2018, said then that Ellis’ confession wasn’t coerced.

Authorities had alleged in the Freeport encounter that Ellis, Lyles and Lawrence tried to rob a drug dealer before fleeing in a stolen car that then crashed into a utility pole. Police said they found two loaded pistols in the car, but they never recovered the murder weapon.

State records show prison officials released Lyles on parole earlier this year and Lawrence got out on parole in 2015. Separate juries also convicted them of murdering Healy.

Ellis’ appellate team has claimed a 2018 affidavit from a woman who used the Arby's pay phone shortly before shooting was another reason to throw out Ellis' conviction.

The witness described two Black men she said she first saw in a gray car parked by Arby’s. She said she then saw one of the men near a group of "white college-aged kids" before hearing a gunshot and seeing that man running back toward the car.

Prosecutors contested the truth of the affidavit, but conceded it raised issues that warranted a hearing. Harrington said that evidence could be addressed at a new trial.