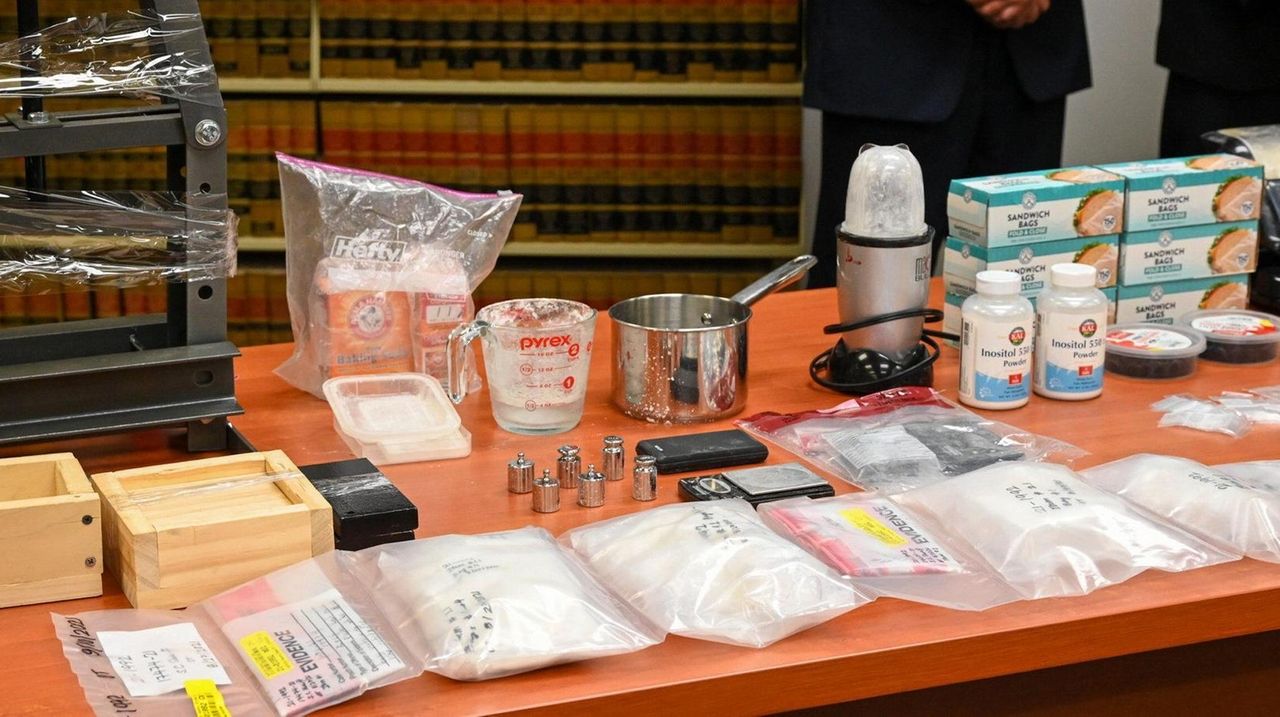 Suffolk County District Attorney Timothy Sini on Monday said authorities seized a kilo and a half of cocaine and more than $13,000 in cash while executing a search warrant last month at the apartment of Kobaski R. Claros, 31, and Maria Jesus Rivera, 24. Credit: James Carbone

A Long Island couple accused of operating a cocaine and crack trafficking ring out of their Ronkonkoma apartment face operating as major traffickers and other charges, according to a 15-count indictment unsealed Monday.

Authorities seized a kilo and a half of cocaine and more than $13,000 in cash while executing a search warrant last month on the apartment of Kobaski R. Claros, 31, and Maria Jesus Rivera, 24, along with a stun gun, scales, a kilo press, cutting agents and drug paraphernalia, Suffolk County District Attorney Timothy Sini said at a news conference after Claros was arraigned on Monday.

The seized cocaine has a street value of $150,000, according to prosecutors.

Sini said officers also seized thousands of dollars worth of jewelry, luggage and other luxury goods at the home. Claros and Rivera sold drugs out of a Land Rover, a Mercedes-Benz and other expensive vehicles, he added.

"They used the profits of their alleged drug trafficking operation to fund a lavish lifestyle, including high-end vehicles, designer clothing and shoes and expensive jewelry," Sini said. "This was a lucrative business for the pair, but it has been effectively shut down because of the great work of law enforcement."

Claros and Rivera face up to 25 years to life in prison if convicted on the top charge.

"My client maintains his innocence and he looks forward to a thorough investigation," said Claros’ attorney, George Duncan of Islip Terrace. "We are stil obtaining discovery. Once we obtain full discovery, we believe he will be exonerated."

Duncan said Claros was charged as a major trafficker based on an inflated value of the seized drugs.

"He is charged with a major trafficker offense based on the valuation of the cocaine found," Duncan said. "It is my belief that the district attorney’s office gave it a street valuation which is in my opinion improper. I believe once the proper motions are made, that they will be reduced down and he will not be facing that charge."

Rivera was arraigned on Thursday and bail was set at $500,000 cash, $2 million bond or $4 million partially secured bond. She is being represented by attorney Del Atwell of East Hampton and is due back in court on Oct. 1.

Atwell did not immediately return a request for comment.

You might have to pay $35 to drive through Manhattan starting in 2023
Police: Pedestrian hit, critically injured by driver in crash
Affordability and open space are the allure in Middle Island
Port Jefferson Station housing gives former marine a home and a chance at 'serenity'
Can vaccine holdouts on Long Island be swayed?
'Moulin Rouge! The Musical' sashays home with 10 Tonys
Didn’t find what you were looking for?