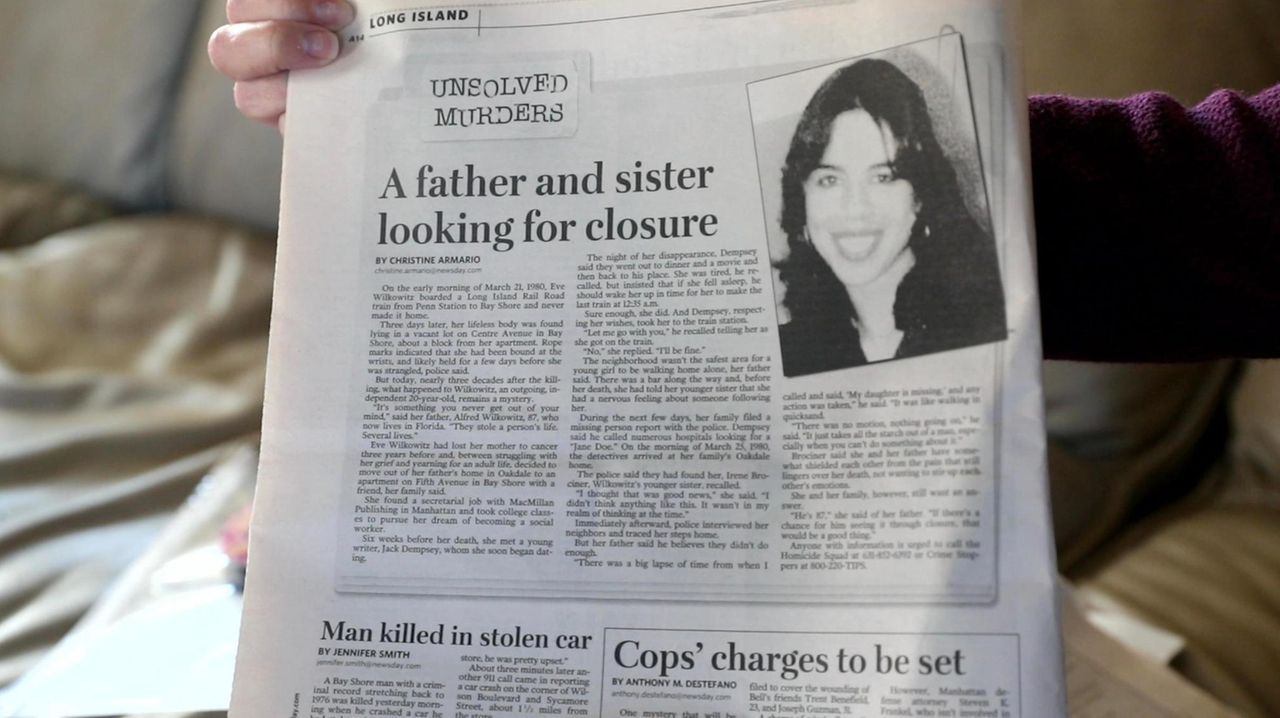 Eve Wilkowitz was murdered in 1980 when her sister, Irene, was 17. On Dec. 7, Irene recalled how Eve's murder affected her own life. On Nov. 26, Suffolk Police Commissioner Geraldine Hart talked about how the department hopes to solve the cold case using the FBI's new DNA crime-solving techniques. Credit: Newsday / Steve Pfost; Randee Daddona

For almost 40 years, Irene Wilkowitz has been haunted by the horror of the crime that took the life of her sister, Eve, who was just 20.

Eve Wilkowitz was working at a Manhattan publishing house when her body was found near the Bay Shore train station early on March 25, 1980. She had been abducted sometime after she got off one of the last trains to leave Penn Station three days earlier, then bound, raped and strangled, police said.

No one was ever brought to justice for her murder. But now, all these years later, the FBI is joining the investigation at the behest of Eve's family and the Suffolk County Police Department because the federal agency can use new investigative techniques that could help solve the case.

Eve's death left her sister with a never-ending sense of loss.

“It should have never happened. She had her whole life to live and didn’t get a chance to live it, a chance to be an aunt, a mother, a sister,” Irene Wilkowitz said in an emotional interview with Newsday.

The brutality of Eve's killing — police theorize she was forced to go with her attacker — has left Irene with constant dread, a fear that she could also find herself a victim of such an attacker.

Irene Wilkowitz, even though she has an adult son and a daughter, has faced deep unease after a lonely upbringing. Her mother, Dorothy, died at the age of 50, nearly four years before Eve’s slaying, and her father, Alfred, died at 90 in 2010.

“I had to grow up alone and then I kept thinking, ‘when is it going to happen to me?'" Irene Wilkowitz said in an interview at her home in Rhode Island. “I have just been a nervous wreck in that somebody is behind me, somebody is going to do that to me and the children.”

Irene described herself as a shy 17-year-old living with her father in Oakdale when Suffolk County police, investigating Eve’s disappearance, came to the door. Eve had last been seen boarding a train in Manhattan after spending time with a new boyfriend. She never made it back to her Bay Shore apartment, about three blocks from the train station.

“I opened the door and started heading up the stairs, thinking ‘why are the police here?’" Irene Wilkowitz recalled. “He came back and said he wanted me and my father to hear what he had to say.”

The detective said Eve had been found. Irene breathed a sigh of relief, an emotional release uplift that lasted for barely a second.

“We found your sister’s body,” one of the detectives said.

At first, Irene Wilkowitz said she didn’t know what the officer meant exactly. But then when her father started to cry she knew how terrible things were.

What happened next was a blur: a visit to the morgue, a funeral, hordes of news reporters and photographers descending upon the family home.

Eve Wilkowitz’s killing remained a big story for a while, and detectives ran down as many leads as they could find. They checked local bars and a strip club near the train station and investigated reports of suspicious characters. Eve’s boyfriend and a former boyfriend she had been living with at the time in Bay Shore were all cleared through DNA testing, as was a man who Eve had once complained had followed her from the train station, police said.

As months and years went on, the case of Eve Wilkowitz remained unsolved. In police jargon, it became a “cold case,” one that would periodically be revisited by detectives, to no avail.

Irene Wilkowitz went on to marry, lived for a time in East Meadow, had a son, Evan, and a daughter, Dara, and then after a divorce moved to Rhode Island. With the lack of progress in the investigation, her pessimism grew.

But in recent weeks the murder investigation has been re-energized with the FBI joining the probe. In an interview with Newsday, Suffolk County Police Commissioner Geraldine Hart revealed the federal interest.

“They are interested and they will open up an investigation on their own and we will collaborate together,” Hart said.

The FBI involvement is significant because it opens access for Hart to the emerging forensic technique of genetic genealogy, a process through which DNA profiles of an unknown suspect are run through public genealogical databases to find potential family members of a person who may be of interest. Local police agencies don’t have the technology to do the genealogical testing and under current New York State rules can’t farm out the testing to private laboratories. The state is considering licensing private labs.

But if a federal agency is involved in a joint investigation with local police, state officials have said the prohibition on having private laboratories do the testing doesn’t apply.

The FBI involvement has given some hope to Irene Wilkowitz.

“I guess I have reason to feel a little optimistic now. The FBI is getting involved, maybe just maybe there will be closure. But I don’t know. I can’t get my hopes up too high — it has been almost 40 years and nothing has happened.”

Suffolk County police are taking other steps to push for new leads. Det. Lt. Kevin Beyrer, the head of the Suffolk police homicide squad, provided Newsday with the names of three bars and clubs that existed in March 1980 in an effort to jog the memory of anyone who recalls anything suspicious around the time of the Eve Wilkowitz killing.

The locations, according to Beyrer are: the Grand Central and the Sidecar Pub, both in Bay Shore, and a defunct strip club known as Lemon Tree that had been in Islip.

“Those three have come up a number of times in the investigation,” Beyrer said in an interview, along with Hart and deputy commissioner James Skopek.

Irene Wilkowitz said she only learned a few weeks ago that her sister had been raped. It was a distressing piece of information but something she realizes may provide a key to solving the case.

“I didn’t want to hear about that, but that is how they got the DNA,” she acknowledged. “With the new technology out, it makes a difference.”

The DNA sample was a robust one, said police, and it may also allow for use of a second new forensic method, familial searching. Although similar in some ways to genetic genealogy, familial searching electronically goes through DNA law enforcement databases and, after finding similarity between samples, takes the additional step of analyzing the Y-chromosome, the male chromosome, to develop possible suspects through regular detective work.

Familial searching gained approval in New York State after the 2016 murder of Howard Beach jogger Karina Vetrano. Stymied NYPD officials and Queens prosecutors pushed for the procedure, and it was approved in 2017. The Vetrano case was solved without familial searching, although her parents, Catherine and Philip Vetrano, are still ardent supporters of the methodology.

Philip Vetrano has communicated with Wilkowitz through social media because, in his words, “I wanted to give her hope.”

Hart said familial searching in the Wilkowitz case was “under way,” although she acknowledged that the procedures were intricate and time-consuming.

While genetic genealogy and familial searching have helped solve cases in other states and overseas, it is not a sure thing. The size of the public genealogical databases available for law enforcement searches is smaller than a year ago because some databases have given public clients the right to keep their genetic profiles confidential, narrowing the pool profiles available for comparison. Familial searching in New York also has a series of legal and procedural requirements that can take time.

But as the detectives do the work, Irene Wilkowitz struggles with the past and its impact upon her. A breast cancer survivor who has also battled Crohn’s disease, she has carved out a life for herself in Rhode Island, where she has taken up long distance running and has completed more than 80 half-marathons.

Yet fear is a constant for her. She never jogs wearing earphones, the better to keep aware of anyone approaching her from behind, and she sits with her back to the wall in restaurants. She also worried about her children, who are now adults living their own lives.

“I was always scared for their safety. Every time they went out the door, ‘please call me as soon as you get to wherever you are going or text me,'" Wilkowitz said.

Hart wants Wilkowitz to know her office is not forgetting.

“We call these generically cold cases, but they are never really cold in the department. They are constantly being reevaluated,” Hart said. “Not only with scientific opportunities, but also opportunities to renew public interest in the case. Hopefully, the bars might spur somebody’s memory.”

Wilkowitz said finding the killer would bring a measure of closure and solace, as well as justice.

“She deserves it,” Irene Wilkowitz said. "But I am afraid to feel, afraid to go to that feeling because I have been disappointed 40 years.”

LIer wants justice 36 years after sister's deathBrief but heartwarming, the email arrived in Irene Brociner's inbox — on the 36th anniversary of her sister's unsolved slaying.