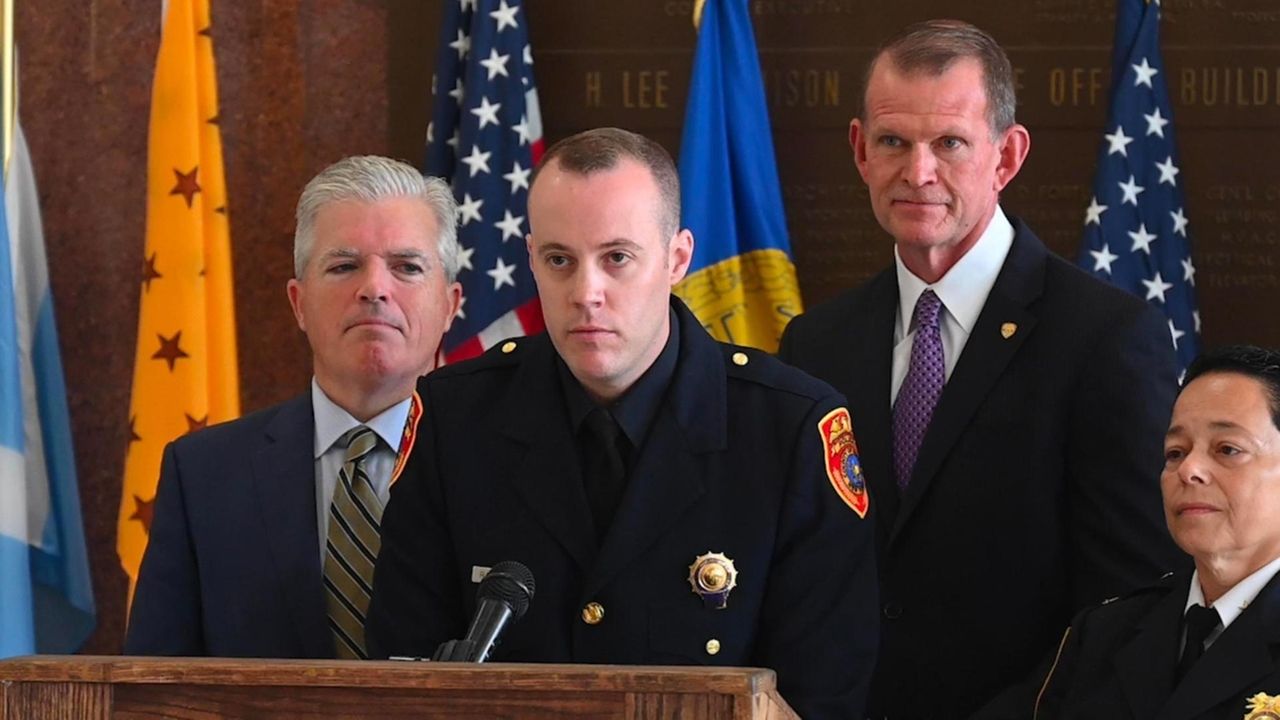 Christopher Racioppo, in uniform and walking unassisted, said he was "very honored" to achieve the rank of detective. Credit: James Carbone

The Suffolk County police officer who almost died in April after he was stabbed by a drunken driving suspect was promoted to the rank of detective, officials announced Monday.

Christopher Racioppo, in uniform and walking unassisted, said he was "very honored" to achieve the rank of detective as he stood beside acting Police Commissioner Stuart Cameron, Deputy Commissioner Risco Mention-Lewis and County Executive Steve Bellone while his promotion was announced during a news conference in Hauppauge.

"I’m very honored to be a Suffolk County detective," said Racioppo, who joined the department in 2018. "This has been my goal my whole career. Came a little sooner than anticipated, but I’m OK with that."

Racioppo spent 16 days in the hospital after losing most of his blood in a near-fatal stabbing in Patchogue on April 10.

"It’s definitely a miracle," Racioppo said of his survival. "There were so many pieces that kind of fell into place."

"He put his life on the line and he almost lost it," Cameron said.

In a marked patrol car, Racioppo saw a 1999 Mercedes-Benz driving erratically with no headlights on South Ocean Avenue in Patchogue, police have said. When Racioppo attempted to stop the vehicle, the suspect, Jonathan Nunez of Centereach, allegedly sped off in the Mercedes and crashed into a 2004 Nissan.

Police have said Racioppo followed Nunez into a nearby yard, where the suspect stabbed him in the left thigh, cutting the femoral artery and a vein.

The police department and hospital officials have credited the quick actions of those who sprang into action and assisted Racioppo – including police officers and civilians – with saving his life.

"We are incredibly proud and grateful for you to serve us," Bellone told Racioppo Monday as he presented the newly minted detective with his new shield.

Cameron said Racioppo's sergeant called him "the best cop in his squad."

Racioppo, who said he’s still healing from his injuries and doing physical therapy three days a week, said he hopes to be back to work in the police department in the next few months.

Racioppo said he doesn’t know what assignment he’ll have as a detective.

"I was always an active cop, so I’m just going to take all my knowledge that I had on the street, all the stuff I did as a patrol cop and then try to use that as a detective," he said.

Racioppo’s fiancee, Brittany Cunningham, a nurse who is expecting their daughter in November, said she’s "really grateful" he’s able to return to work at all.

"I’m incredibly proud of him," said Cunningham. "He’s a hero. …I think he’s gonna be an excellent detective. He’s incredibly hard-working and dedicated to his job."