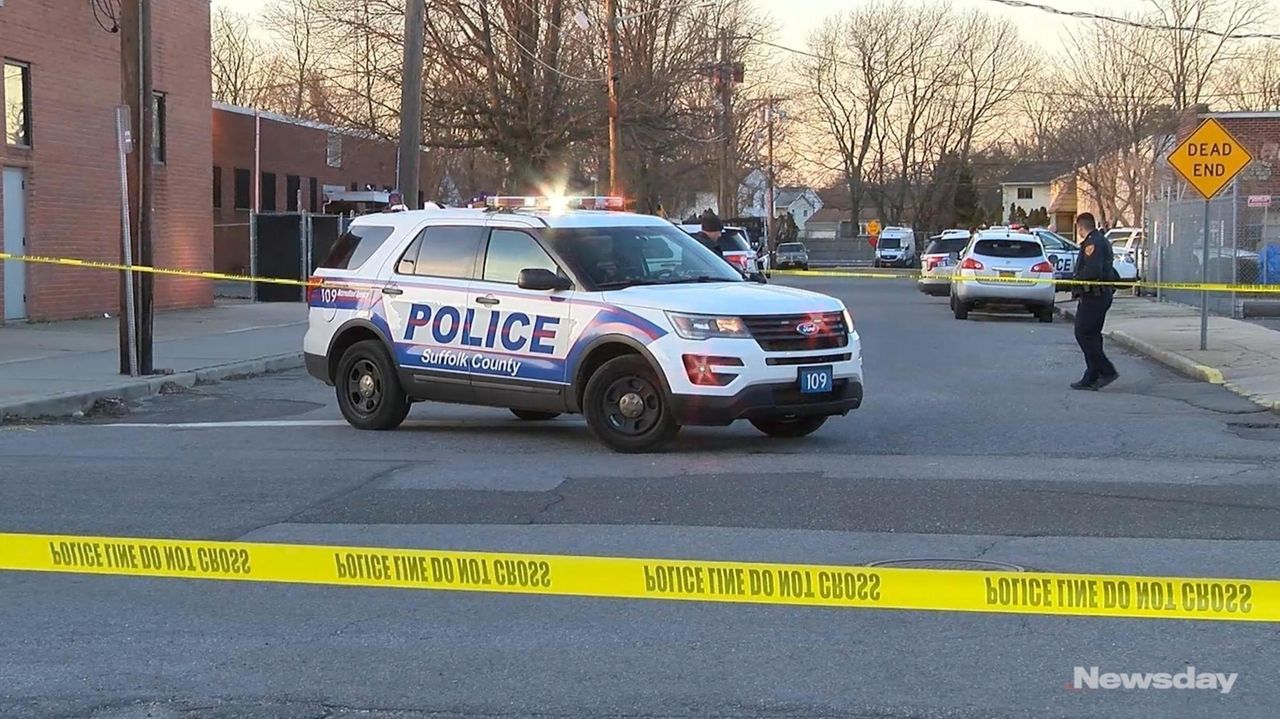 On Wednesday, Suffolk police Det. Lt. Kevin Beyrer spoke at the scene of the crime in Copiague where a man was found fatally shot earlier in the day.   Credit: Stringer News

Suffolk homicide detectives continued searching for clues Thursday into the shooting death of a Lindenhurst man in Copiague, while the victim's mother said her son was engaged to be married and a doting father to his 4-year-old daughter.

Late Thursday night, police said they had no updates on the investigation into Hanson's death. At the scene Wednesday night, Beyrer said Hanson was targeted in the shooting and "had a connection" to the auto repair shop.

Reached by phone in Costa Rica where she was visiting, the victim's mother, Lichele Hanson, 45,  of West Babylon, said her son "had his whole life ahead of him. He was taken from us."

"He has a 4-year-old daughter that will never see her father again over gun violence," she said. "He just turned 25."

She said her son owned a Long Island auto body shop and had overcome mistakes in his past.

"It was going well. He was just up and coming. He just started getting to where he should be," she said. "When he was younger, he was involved in the street life, and unfortunately, I think that's what caught up with him. When he changed his life around, his background, I think that affected him more than what he did in the future."

Beyrer said witnesses reported hearing a series of gunshots on the Copiague street before the officers arrived to find Jewuel Hanson dead.

"We believe there were a number of shots fired based … on what witnesses reported to us," Beyrer said Wednesday night near where Hanson was shot.

The crime scene is located in an area of Copiague that includes a school bus lot and machine shops.

At the scene Wednesday night, Ricardo Hanson, the victim's father and Lichele Hanson's husband, described his son "as a good kid, a good kid. Loved by many. This shouldn’t have happened to him.”

About 30 onlookers, many of whom identified themselves as friends or family of the victim, stood behind the police tape for hours after the shooting hoping for an update from investigators.

"They just killed my little cousin," a 30-year-old man from Wyandanch said. "That's my blood. It happens when you're out here on the streets."

Lichele Hanson said that if not for her trip to Costa Rica, she would have been with her husband and loved ones at the crime scene. Ricardo Hanson expressed frustration because his son's body remained on the Copiague street for hours and police wouldn't allow him closer access.

He called Wednesday the "worst day" of his life.

A woman who said she was in a relationship with Jewuel Hanson, fought back tears as she stood about a block from his body. Hanson's relatives later said the woman was his fiancee.

Lichele Hanson said she will miss her son for many reasons, but mostly because of the loyalty he showed to his family.

"He loves his family, no matter what. He cares for his daughter," she said. "Good, bad or indifferent … he made sure all of us were taken care of."

Detectives ask anyone with information on this shooting to call the Homicide Squad at 631-852-6392 or anonymously to Crime Stoppers at 1-800-220-TIPS.