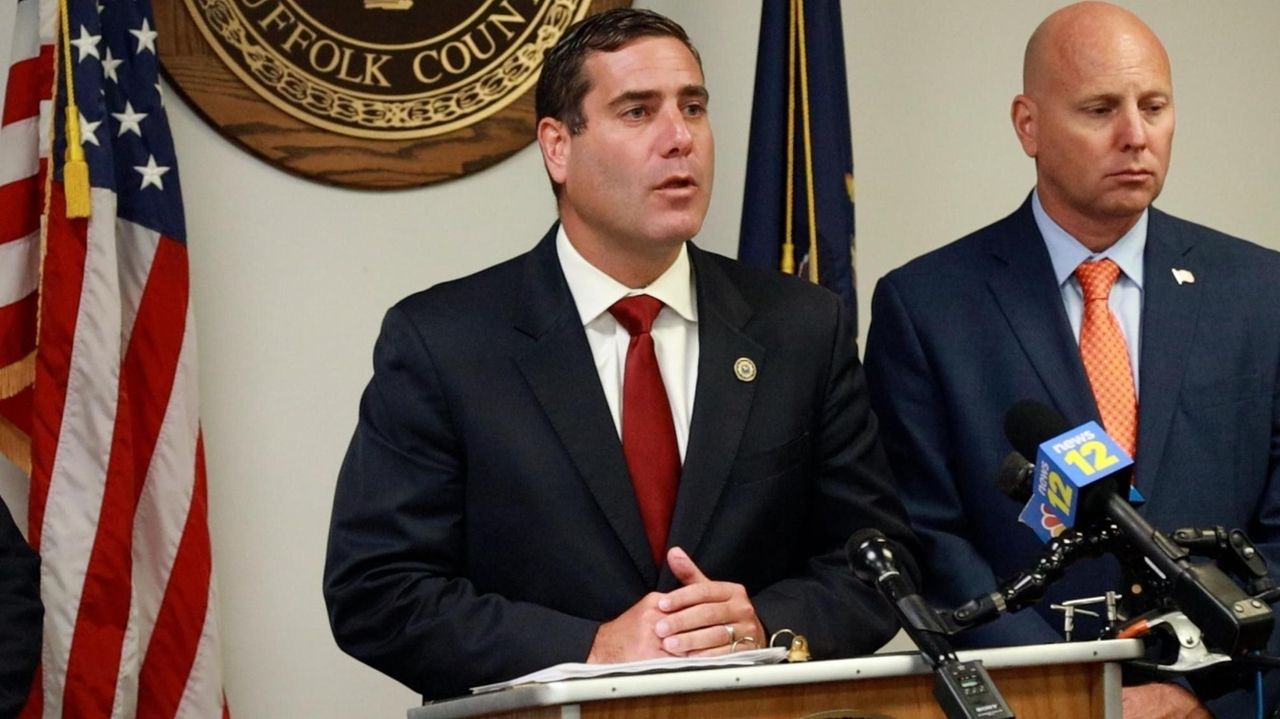 "We will not tolerate county employees, who are already on the public payroll, to steal taxpayer money and illegally use government resources for their own personal gain," Sini said at a news conference Wednesday.

Christopher Naples, 42, of Mattituck, turned himself in to authorities Wednesday morning and was charged with third-degree grand larceny, public corruption, computer trespassing and official misconduct. Naples pleaded not guilty and was released without bail at his arraignment.

Naples, who has worked for Suffolk County government since 2000, is the assistant manager of Information Technology Operations in the county clerk’s office. Naples’ current employment status was unclear.

Suffolk County Clerk Judith A. Pascale, in a written statement Wednesday, said her office was "fully assisting" the DA's investigation.

"The public can be assured that no Suffolk County records were accessed, misused or impacted by the conduct being investigated by the District Attorney’s Office," Pascale said.

Naples’ attorney did not respond to a message seeking comment.

The district attorney's office began investigating after receiving a tip to its Public Integrity Bureau and installed surveillance cameras in the hallways of the building housing the clerk's office in the 300 block of Center Drive in Riverhead.

Sini said authorities executed search warrants on Aug. 19 and found 46 cryptocurrency mining devices, which require high levels of electricity to run, hidden in six different rooms — including under removable floorboards and inside an unused electrical wall panel. Authorities believe Naples had been operating at least 10 of the machines since February.

Sini said Naples admitted to owning and installing the devices when confronted by investigators.

Bitcoin, a digital store of value that operates without a central bank or overseer, are "mined" by high-powered computers and the transactions are recorded in a ledger known as blockchain. Mining is legal and can be lucrative. Sini said investigators are still trying to determine the dollar amount of Naples' mining proceeds.

Before Naples' alleged mining was uncovered, county employees working in the building housing the clerk's office had complained about the air conditioning and slow internet connections, which Sini attributed to the strain on the building's energy resources due to the mining.

Sini said when investigators entered a room where the bitcoin mining was occurring, which also housed secure data storage systems and communications equipment for county government, an alarm indicated the temperature was too high.

"Within hours of the devices being shut down, the temperature in the room dropped 20 degrees," Sini said. "So not only was this operation being paid for with thousands of dollars of taxpayer money, but it also put the County’s infrastructure at risk. The defendant also had to bypass the County’s internet security protocols in order to get these devices online, which could have potentially jeopardized the security of the County’s network."

3:52
Gabby Petito's father: 'Her nature was always to smile'
Police: Pedestrian hit, critically injured by driver in crash
You might have to pay $35 to drive through Manhattan starting in 2023
Affordability and open space are the allure in Middle Island
Port Jefferson Station housing gives former marine a home and a chance at 'serenity'
Can vaccine holdouts on Long Island be swayed?
Didn’t find what you were looking for?