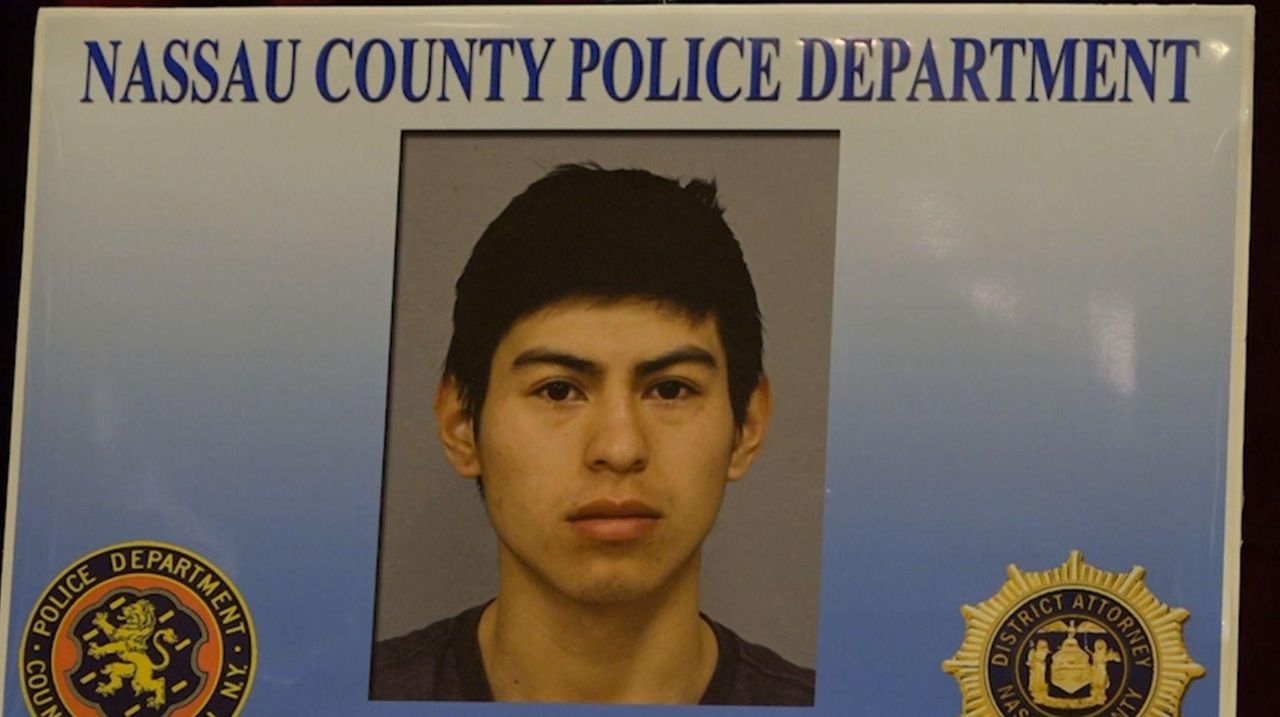 On Wednesday, Sept. 27, 2017, Nassau County authorities said an MS-13 street gang member was arraigned in the shooting death of an 18-year-old on a Uniondale street earlier this month. Nerlin Omar Chacon-Ruano, 19, of Hempstead, who was arrested Sept. 18, was ordered held without bail at his arraignment on a charge of second-degree murder in First District Court in Hempstead. Credit: Howard Schnapp

Nassau County Police are searching for a second suspect, who may have acted as a decoy, in the MS-13-linked fatal shooting of an 18-year-old man in Uniondale that police say was in retaliation for embarrassing the shooter in front of his fellow gang members, officials said Wednesday.

Miguel Ayala-Hernandez, 18, of Uniondale, who police said was not a gang member, was shot nine times as he hung out with friends on an Uniondale street corner just before midnight on Sept. 15, police said. He was pronounced dead at Nassau University Medical Center in East Meadow on Sept. 16 at 12:34 a.m.

Nerlin Omar Chacon-Ruano, 19, of Elmwood Avenue in Hempstead, was arrested on Sept. 18 near his home, and charged with second-degree murder in the slaying, police said.

A second suspect, who police are looking for, rode by Ayala-Hernandez and his friends on a bicycle just before the shooting and “exchanged words with the group,” said Nassau Det. Lt. Stephen Fitzpatrick, commanding officer of the Homicide Squad, during a news conference at police headquarters in Mineola.

The group was “distracted” by the male, while Chacon-Ruano rode up on a second bicycle, got off his bike, and opened fire.

Chacon-Ruano, who police said is an MS-13 gang member, wielded a .9mm semi-automatic handgun when he fired more than 10 shots at Ayala-Hernandez, said Fitzpatrick.

The shooting was in retaliation for an “altercation” between Ayala-Hernandez and Chacon-Ruano the day before, police said.

“Miguel had chased Nerlin in front of other MS-13 gang members and embarrassed him,” said Fitzpatrick. “Nerlin then retaliated by shooting Miguel.”

Asked whether Chacon-Ruano was pressuring the victim to join MS-13, Fitzpatrick said they’re still investigating but it appears the victim was being bullied by the shooter.

“There was some conversation in regards to that,” said Fitzpatrick, referencing the possibility of pressure to join the gang. “We can’t say that definitively right now. But there was some intimidation going on.”

Chacon-Ruano, who police said was in the country illegally, has a prior arrest for attempted burglary with a dangerous instrument and criminal mischief, said Fitzpatrick.

The killing is the fifth MS-13-linked killing in Nassau County and the 22nd overall on Long Island since 2016, officials said. Suffolk County, where there have been 17 MS-13 killings in that time, became a poster child for the gang violence after two teenage girls were killed a year ago in Brentwood by people who police said are members of the gang. At least six people have been indicted in the killings.

“We’re going to keep that pressure on until they get the message they’re not accepted in this county,” said Ryder, who did not provide additional information on the arrests.

Nassau police and the district attorney’s office did not tell the public that an arrest had been made in the killing until after Chacon-Ruano was arraigned. Both agencies said it was not a policy change to keep arrests in homicides cases secret, but rather a function of building sensitive gang cases.

“Sometimes the needs of the investigation come in front of that,” said Fitzpatrick. “We have to execute search warrants, we’re looking for the second subject, we’re interviewing people and some people that may have cooperated, we need to get them into protective custody. So those needs come way before yours.”

Ryder, who began his reign as acting commissioner in July, said: “The public gets notified as soon as we make an arrest, when the investigation is closed. That investigation was ongoing; there were search warrants. We don’t hold anything back from the public. Public safety is number one in this county.”