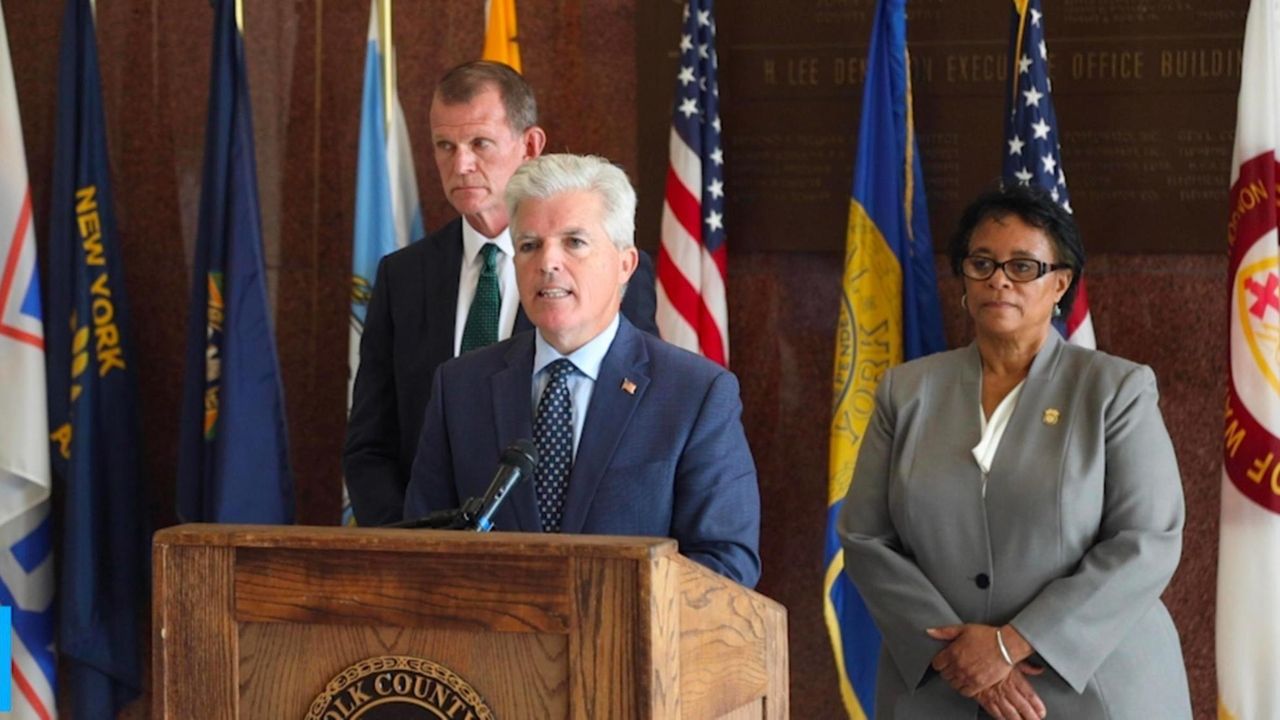 Suffolk County Executive Steve Bellone on Friday said the preliminary results of an internal affairs investigation into an allegation that police assaulted a woman who was attempting to assist a shooting victim at a Dix Hills graduation party was found to be "false" based on fire department dashboard camera video.

"The fact is that the evidence gathered in this investigation reveals that the allegation that officers physically assaulted this individual for no reason is false," said Bellone, speaking at a news conference at Suffolk government headquarters in Hauppauge. "The evidence, in fact, indicated these officers acted in the best interests of this victim."

Cindy M. O'Pharrow, president of Cops N' Kids Long Island — a police-youth mentoring program — last week filed a notice of claim against the county and the police department, alleging she injured her arm when she was forcibly removed by police from the rear of an ambulance on June 27.

O’Pharrow had also alleged police swore at her, refused to provide their names and shined their flashlights into her cell phone camera as she attempted to take photo and video of officers at the scene. Those allegations were not addressed Friday and remain under investigation.

O’Pharrow's attorney Frederick K. Brewington, who held a news conference last week to make the allegations, on Friday responded by email: "From Mr. Bellone’s statements, it is clear that he has decided for the police department that the charges are unsubstantiated, making the case that so many people in the public have made. Suffolk internal affairs hasn’t even interviewed Mrs. O’Pharrow yet and they are making a determination. What kind of police work is that? Clearly, no civilian even stands a chance in pursuing justice. Clearly, there is no denial that force was used on Mrs. O’Pharrow."

Acting Police Commissioner Stuart Cameron in a statement said "investigators have reached out repeatedly but have been unsuccessful in securing an interview with Ms. O'Pharrow."

Cameron, speaking at the news conference where officials also announced a $2,000 reward for information leading to the arrest of the still-unidentified shooting suspect, said police were "facing an untenable standoff" with O'Pharrow. Cameron said police had to act in order to get the shooting victim to the hospital quickly. The victim has since been released from the hospital.

"She wouldn’t get off and the fire department wouldn’t leave with her in there," said Cameron, who said witnesses on-scene said they heard the fire chief telling O'Pharrow not to enter the ambulance. Cameron said fire department policy prohibits civilians who are not receiving treatment from riding in ambulances.

A 1 minute, 59 second dashcam video played for reporters Friday shows the 20-year-old West Babylon man, who was shot in the stomach, being loaded into an ambulance and a woman in white — who officials identified as O’Pharrow — appearing to speak to EMS officials, though the conversation was inaudible.

Cameron, who immediately launched an internal affairs investigation upon being told about O'Pharrow's allegations, said the video showed that O’Pharrow was "agitated" and was "waving her finger" at EMS personnel before getting in the ambulance.

A man who Cameron described as the victim’s cousin could be seen standing outside the ambulance saying repeatedly: "Just get out so they can leave."

Two officers are later seen lifting O’Pharrow by her arms and placing her feet on the ground.

Cameron said the officers appeared to use "great restraint" and "took great care to put her carefully down on the ground so she would not be injured." Cameron said police would have been justified in arresting O'Pharrow for refusing to leave the ambulance.

"She was delaying transport of a critically injured person, but I do believe she was well intentioned," said Cameron, who added trauma can sometimes cloud judgment. "She’s a very wonderful person. ... Who stepped up and tried to help him? Cindy O’Pharrow."

Bellone said the county released the video because the public nature of the allegations could "undermine public confidence" in the police department.

Bellone took aim at Brewington without naming him. "This attorney got in front of multiple cameras and said these officers used force against someone for no reason," said Bellone. "The attorney then actually held up pictures of these officers and was accusing them of abusing their power ... that they abused their authority, that they physically assaulted a woman for no reason. That is what was said. That was the charge — very serious that was made — none of that is true."