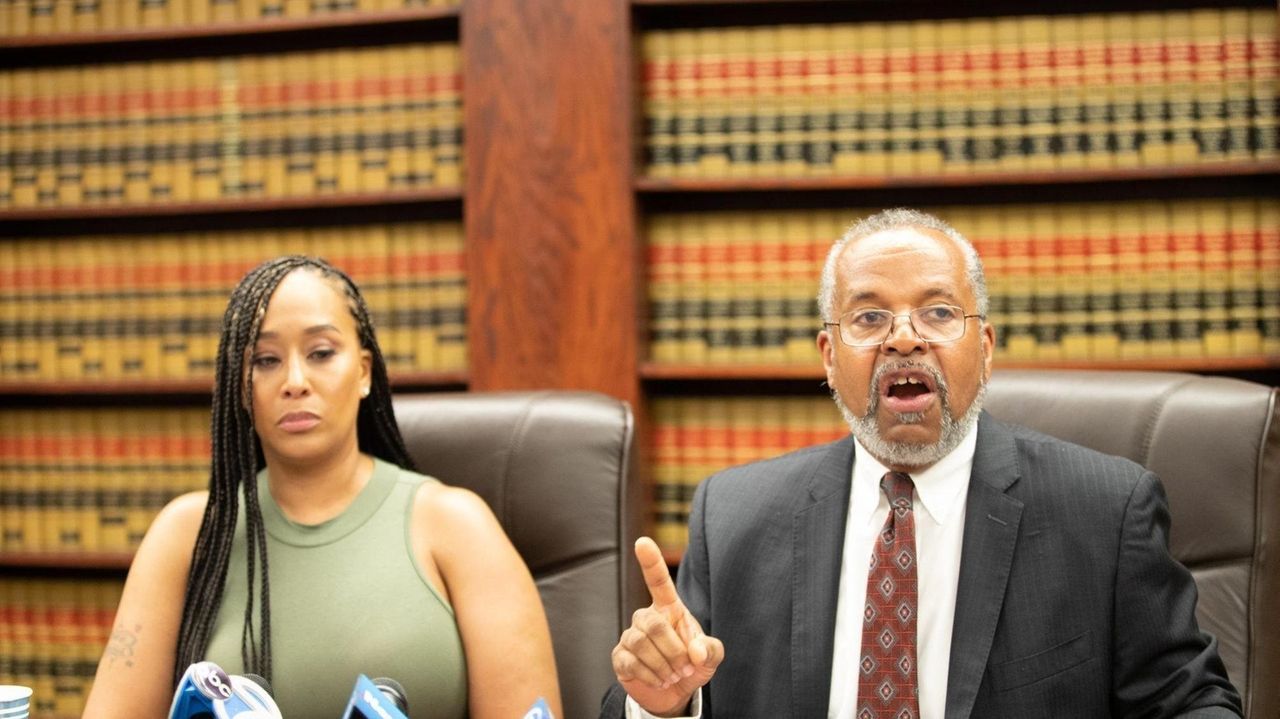 A woman from Suffolk County is planning to sue the county and its police department, alleging she was assaulted by a police officer while trying to assist a gunshot victim at a Dix Hills graduation party last month. Newsday's Steve Langford reports. Credit: Kendall Rodriguez; Photo Credit: Cindy O’Pharrow

A Suffolk County woman who runs a nonprofit that pairs police officers as mentors to youth said she intends to sue the county and its police department, alleging she was assaulted by a police officer while trying to assist a gunshot victim at a Dix Hills graduation party last month.

Cindy M. O'Pharrow, president of Cops N' Kids Long Island, on Wednesday tearfully recounted her June 27 interaction with officers from the Suffolk County Police Department, which has opened an internal affairs investigation into the incident.

"The way I was treated, physically and verbally abused by Suffolk officers and a Suffolk lieutenant, demonstrated to me that there's an urgent need to change the culture in Suffolk, which has allowed police to treat members of the community any way they want with no regard for professionalism or respect," O'Pharrow, who is Black, said Wednesday during a news conference at her attorney’s office. "This is especially true when it comes to the Black and brown communities in Suffolk County."

Acting Suffolk Police Commissioner Stuart Cameron told Newsday in a statement last week that the department had immediately opened an internal affairs probe into the incident — even before receiving an official complaint from the alleged victim. The police department declined to comment Wednesday, citing the pending litigation.

Frederick K. Brewington, O'Pharrow's attorney, filed the notice of claim — a precursor to a lawsuit — and O'Pharrow's police department complaint Tuesday. The claim alleged the officers' actions were a violation of her civil rights and that O'Pharrow suffered "serious physical injuries, monetary and emotional injuries."

Brewington called for an outside investigation into the incident, the release of names of all of the officers present and a public apology for O'Pharrow's treatment.

"A lawsuit is probable and likely unless Suffolk County wants to come with their apology and their checkbook," Brewington said.

"The Suffolk County Police Department has made certain claims that they want to change, but the evidence of how they act shows there is no change on the horizon," Brewington said. "If the president of Cops 'N Kids Long Island, or anybody, can be treated this way, then there really is no hope for change."

O'Pharrow, who is married to a police officer, said she was a guest at the Seaman Neck Road home of a friend who was throwing a graduation party for their son and daughter. At around 12:15 a.m., O'Pharrow said in her notice of claim, she was standing at the end of the driveway and encouraging the guests to leave orderly when she heard one or two gunshots ring out.

Suffolk police have said a 20-year-old West Babylon man was shot but survived.

O'Pharrow said she and others rendered aid to the young man who was shot and she, at his direction, called his mother on FaceTime. The victim and his mother, who was out of the country at the time, spoke, and O'Pharrow said she promised the mother that she would stay with her son. When she attempted to enter the ambulance, once the victim had been loaded inside, she said a Suffolk police officer yelled "get the hell out of the ambulance."

O'Pharrow said she asked why and was told there was no room, but she was already inside and perceived there to be enough room for everyone.

O'Pharrow said at that point, the officers stepped into the ambulance and yelled, "Did you hear what the hell I told you? Get the hell out," while simultaneously grabbing her by her left biceps and wrist and, while using "extreme force," yanking her from her seated position.

O'Pharrow said she shouted, "What the hell are you doing?" And the officer responded: "I told you to get the [expletive] out of the ambulance" and proceeded to pull her all the way out.

When she tried to get the officer's name and badge number, she said she was mocked and laughed at. She said when she told a lieutenant who was on scene that she was going to report her treatment to Deputy Police Commissioner Risco Mention-Lewis, the supervisor told her: "I"m the [expletive] boss out here, you got that? So call whoever the [expletive] you want."

According to O'Pharrow, police officers shined their flashlights into her cellphone camera as she attempted to take photos and videos of the officers.