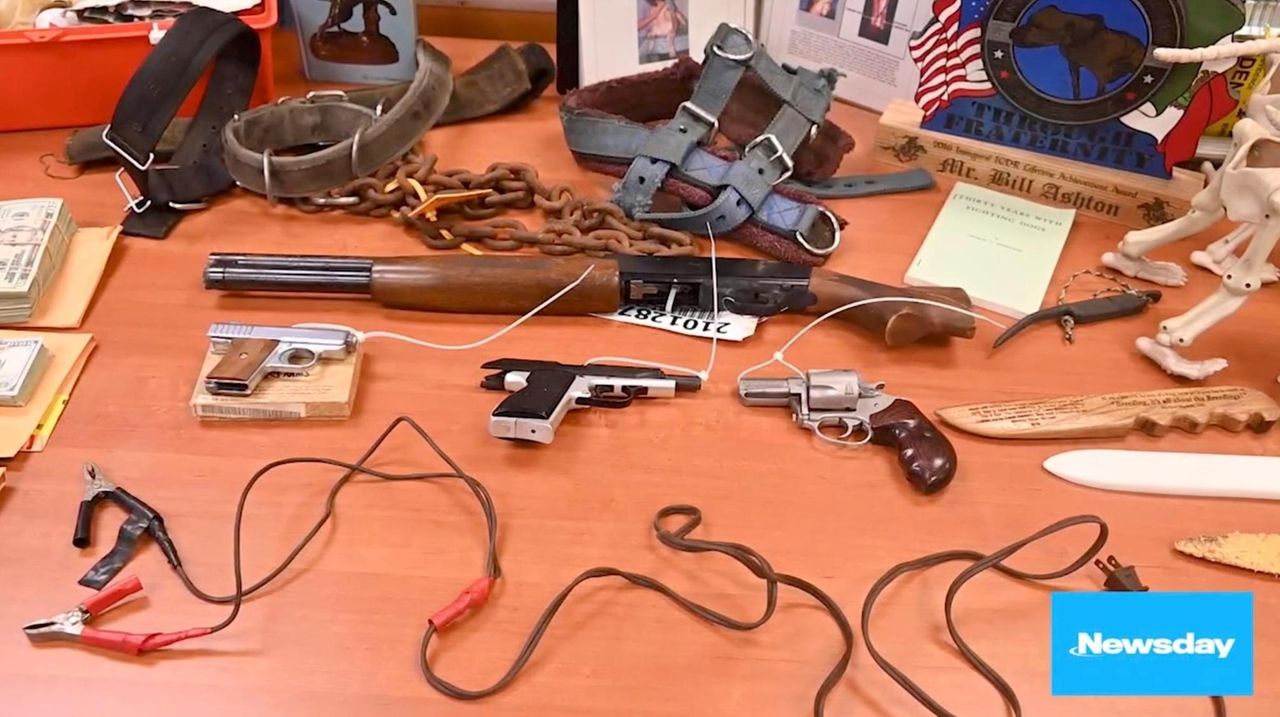 Dogs were tortured, trained to fight to the death and killed for sport, Suffolk District Attorney Timothy Sini said Monday as he announced the takedown of the largest dog-fighting operation in county history.

Ten men who Sini said ran the network — which operated from Suffolk's East End through Nassau, Brooklyn and into Connecticut and Massachusetts — were arrested and charged while 89 dogs were seized.

The dogs, predominantly pit bulls, were kept in "inhumane" conditions and raised from birth to fight, Sini said at a news conference in Riverhead. Dogs that failed in battle were killed, he said.

"These are defenseless animals that are bred for one purpose: to kill or be killed for the mere entertainment of these depraved individuals," Sini said. "The only thing these defendants cared about were money and their own personal status in this sick underground network."

Evidence seized and on display Monday resembled a torture chamber, including devices used to electrocute, poison and even sexually abuse animals. Also recovered was $125,000 in cash — used during betting on the fights — as well as chains, heavy dog collars and multiple firearms, authorities said.

"This is the largest and most brutal dog-fighting ring that this county has ever seen," said acting Suffolk County Police Commissioner Stuart Cameron.

Eighty-one dogs were relocated to emergency ASPCA shelters while eight others are with agencies in Connecticut.

"The dogs that were rescued are receiving specialized care with hope many could be adopted into loving homes," said Elizabeth Brandler, legal advocacy senior counsel for the ASPCA.

The other defendants face up to 4 years in prison. Eight were arraigned Monday in Central Islip and released on their own recognizance. Ashton will be arraigned Aug. 19.

Robert Macedonio, an attorney for Spencer and Owens, said his clients "were not animal fighting. They were not trained animals to fight."

Barker's attorney, Lindsay Henry, said "my client is innocent. They took his family dog with … no indication they were involved in fighting."

Macwhinnie's lawyer, Edward Sapone, said his client "has not been involved in any of the conduct he is being charged with."

Attorneys for the remaining defendants did not respond or declined requests for comment.

Sini on Monday detailed horrific life cycles of the dogs, who allegedly were bred, based on their blood lines, either naturally, through frozen sperm or forced breeding.

The dogs were kept in "deplorable living conditions," Sini said, to build up aggression, including separation from their mothers and a lack of food or water. Practice fights would be arranged with puppies as young as six months to see if they had the desired aggressive demeanor, he said.

"If dogs fail to perform to the expectations of the owner … and did not exhibit the desired characteristics of a champion fighting dog they were often killed in inhumane methods, including electrocution," Sini said.

Fights were the culmination of the scheme, Sini said. Crowds gathered and placed wagers — in one case up to $175,000 on a single event — to watch brutal battles that could last hours, he said. Some dogs died from their injuries while others were killed by their owners for poor performance, Sini said.

Ashton, who co-authored a manual on dog-fighting, performed surgical procedures on injured dogs because of concerns about bringing the animals to licensed veterinarians, Sini said. Ashton has no medical training.

"We need to hold these bad actors accountable for their violent actions," Sini said. "And these crimes need to be treated seriously under the law."

With Cecilia Dowd and Keldy Ortiz