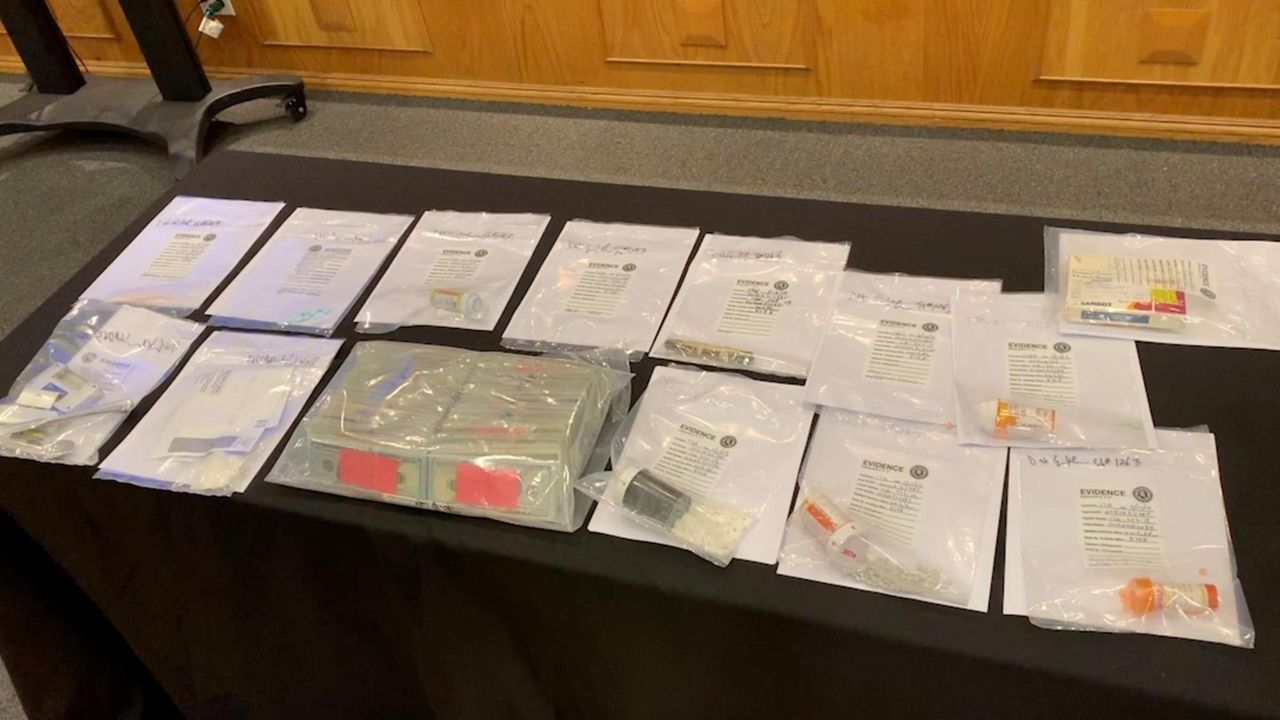 Nassau County officials announced Thursday the arrest of a former NYPD officer and his wife following community complaints that he was allegedly selling drugs at his North Merrick home, across the street from a school. Credit: Howard Schnapp

Nassau County police arrested a former NYPD officer Tuesday following community complaints that he was allegedly selling drugs at his North Merrick home, across the street from a school and daycare center.

Authorities said they seized  about $146,000 in bundled cash, believed to be from narcotics sales, an uncashed $85,000 cashier's check, more than 200 oxycodone tablets, Xanax pills, a half-ounce each of suspected cocaine and heroin, scales, glassine envelopes and a switchblade knife from the home of Kenneth Riggio, 59, and his wife, Faith Riggio, 53.

“The alarming part was that it was done across the street from a daycare center, the Bellmore-Merrick administrative building and an alternative learning school where kids attended daily,"  Police Commissioner Patrick Ryder said at a news conference Thursday in Mineola.

Kenneth Riggio has an extensive criminal record, with arrests for narcotics, driving while under the influence and assault, Ryder said. Faith Riggio, a special education aide for the North Merrick school district who was charged only with a single count of fifth-degree criminal possession of a controlled substance, does not have any prior arrests.

"The district has been informed that a Camp Avenue [Elementary School] special education aide has been arrested for alleged possession and sale of drugs," North Merrick superintendent Cynthia Seniuk said in a statement. "Please know that prior to the hiring of all of our employees, a thorough background check is conducted by the district. However, due to the arrest, this employee was immediately placed on administrative leave, pending the outcome of the legal investigation."

Ryder said Kenneth Riggio is currently unemployed, but was an NYPD officer for about four years, from 1981 until 1985. Ryder said "we don't know the reasons why" he left the force.

An NYPD spokeswoman said records show he was an officer from August 1985 until July 1986 when he was "dismissed." She did not know why he was dismissed.

The couple were arraigned Thursday morning at First District Court in Hempstead before Judge Scott Siller.  Their next court appearance will be Monday.

Their Rockville Centre lawyer, Michael Dergarabedian, said Kenneth Riggio says he has prescriptions for the oxycodone and the cash could be from a recent settlement in a personal injury case. Dergarabedian said he believed Faith Riggio would be "absolved" of her charge.

"The highest form of ignorance is forming an opinion without knowing both sides of the story," Dergarabedian said.

Community complaints had been coming in for months of “cars coming and going all day long,” Ryder said, prompting an unscheduled probation check called "Operation Nightwatch" on Tuesday  at the Riggio home.

County Executive Laura Curran credited the tips regarding the activity at "a house nestled in a lovely suburban community” that helped solve the case and noted its impact on the opioid crisis.

I got my COVID-19 vaccine — what can and can't I do?
Businesses, workers must deal with vaccine etiquette
1:54
Resurrection House homeless shelter could close without county funds
2:24
Sister delivers baby at LI hospital as surrogate for her younger sibling with lung disease
Valva testimony: Ex-cop was 'matter-of-fact' after son's death
St. John's extends Anderson's contract
Didn’t find what you were looking for?