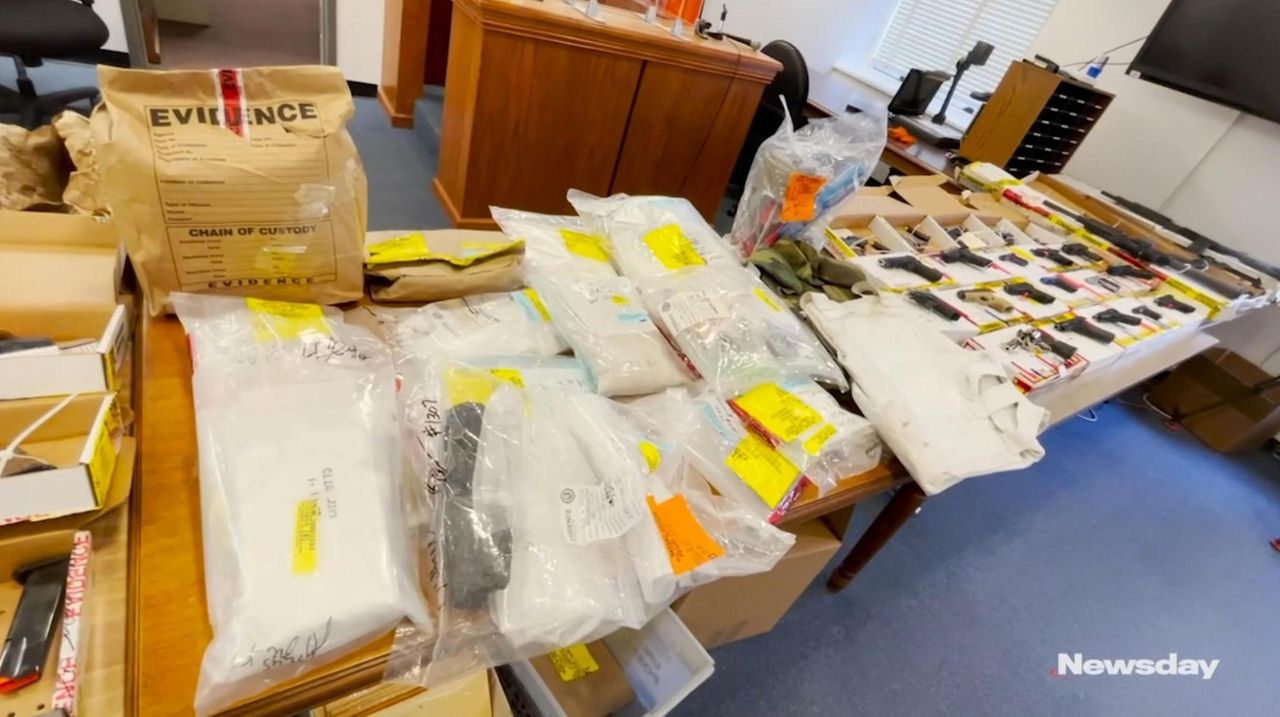 Defendant Lex Lloyd and an unapprehended codefendant stored narcotics and firearms in a room adjacent to a room used for day care at the Hempstead center, according to prosecutors.

"Think about that: Children were eating and playing and being cared for in the same space where cocaine was being packaged," Singas said at a news conference in Mineola on Monday. "Parents trying to work through the pandemic left their children at a day care and this is what their kids were exposed to. It’s horrifying to me as a parent and as a district attorney."

The investigation, dubbed "Operation Honeycomb" because the defendants stored and packaged drugs in a house called "The Honeycomb," began as a crackdown on weapons and gun violence in Hempstead in October 2019. Investigators learned that narcotics traffickers profited from the anxiety and demand for drugs sparked by the coronavirus, Singas said.

"Society shut down but these drug dealers and their drug dealing ramped up, fueling the crisis of drug use and overdoses during this very vulnerable time," Singas said.

Five defendants allegedly sold what Singas called a potentially fatal cocktail of heroin, fentanyl and cocaine. Fatal overdoses spiked more than 30% last year through September, according to data from the Nassau County Medical Examiner’s office, prosecutors said. At least one fatal overdose, in Pennsylvania, has been linked to the defendants.

"People in the throes of addiction were having a hard time," Singas said. "They could not access services and many were self-medicating at home. Demand greatly outpaced supply and the dealers had a hard time getting their hands on product."

Nine of the suspects have been charged with operating as a major trafficker, defined by law as possessing or selling narcotics worth more than $75,000, Singas said. Some of the defendants possessed or sold more than $500,000 during that period. The defendants could be sentenced to 25 years to life if convicted on that charge alone, Singas said.

Drug treatment expert Jeff Reynolds said the arrests will slash the supply of narcotics on Long Island. "But the problem is that for every dealer you take out there are two or three willing to take his place," Reynolds said.

He said treatment and education remain important to reduce demand for narcotics.

"As long as demand is there, supply will be there, too," Reynolds said. "We have to do an equally aggressive job at reducing demand."

As of early Monday, 33 defendants have been arrested and 30 arraigned, Singas said, including eight of the nine charged as major traffickers. Seven remain at large, including a defendant charged with major trafficking, and the indictment remains partially sealed.

Authorities seized $2.7 million worth of drugs, Singas said, including more than 20 pounds of pure cocaine as well as crack, heroin, fentanyl and morphine. Police also seized $380,000 in cash during the investigation, and 38 firearms, including assault weapons and ammunition.

"There is a direct correlation between the trafficking of drugs on Long Island and acts of violence," Singas said. "Each weapon, nearly 40 in total that we recovered, represents lives saved."

Lloyd was not charged with being a major trafficker, but he was charged with attempted murder after allegedly shooting a person in the back on Feb. 10. An attorney for Lloyd, Joseph Lo Piccolo of Garden City, did not return requests for comment.

"The result of this multi-partnership and cooperation strikes a heavy blow to the narcotics infrastructure in Nassau County," Singas said. "We recovered huge quantities of drugs, stockpiles of weapons and 40 drug traffickers and dealers have been indicted for their alleged roles in this dangerous network."

2:38
What will summer look like on Long Island? Here's a preview.
Brown: One toke over the (town) line
State budget fallout: a weakened Cuomo, emboldened lawmakers
Police: School put on lockdown after threat
5:09
NY seeks to suspend or revoke licenses of 18 LI real estate agents cited in Newsday investigation
Police: Man and his dog fatally struck on Merrick Road
Didn’t find what you were looking for?