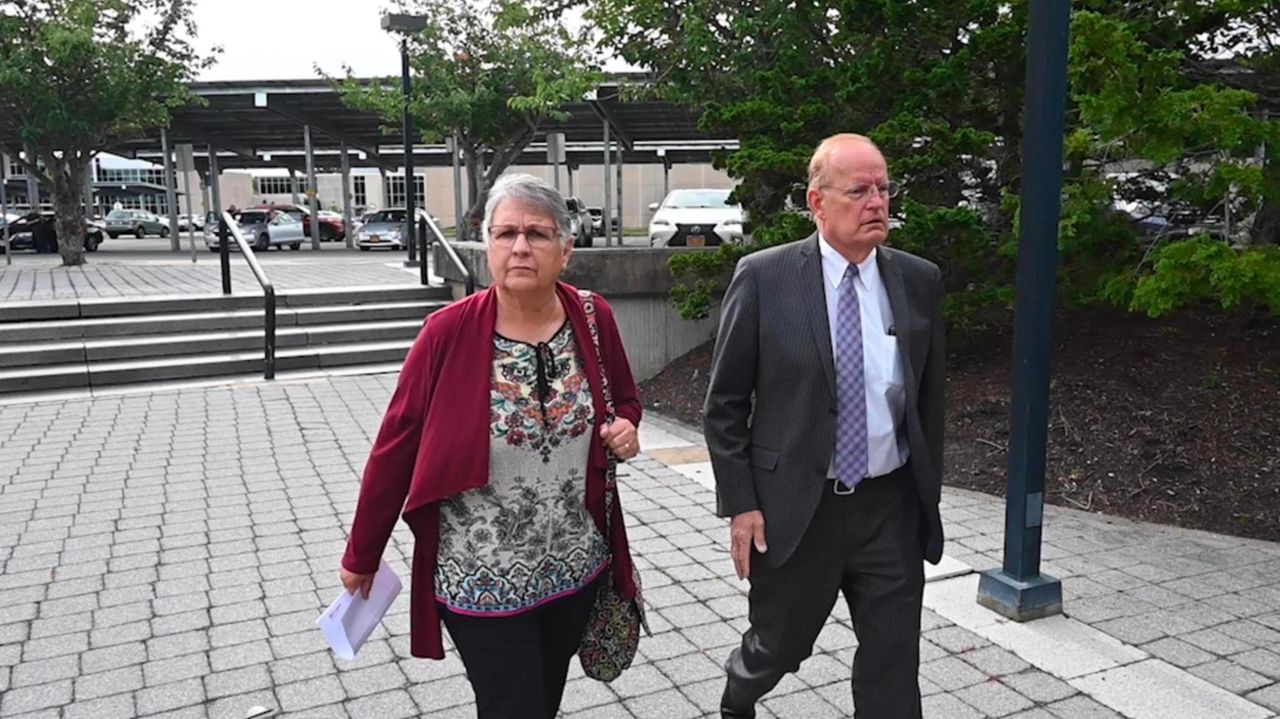 Bus driver Diane Juergens was arraigned on a 38-count indictment Tuesday. She is accused of driving drunk with ten cub scouts under the age of ten and a camp counselor on board the bus. Newsday's Cecilia Dowd reports.      Credit: James Carbone; Howard Schnapp

A bus driver who was allegedly intoxicated when she crashed twice last month while transporting Cub Scouts from a Calverton camp, and then fled the scenes of the accidents, had a blood-alcohol content of 0.30% -- more than three times the threshold for drunken driving -- when she was arrested, Suffolk prosecutors said Tuesday.

Police also found an empty beer bottle near the driver’s seat of the bus after Diane Juergens, 61, was arrested on July 13, prosecutors said during her arraignment in Riverhead on Tuesday.

Juergens, of Ridge, was charged with 20 counts of aggravated driving while intoxicated with a child, 10 counts of endangering the welfare of a child and other crimes in a 38-count indictment. She pleaded not guilty to the charges.

"This defendant chose to get behind the wheel of that bus and endanger the lives of each and every one of the children on board," Suffolk District Attorney Timothy Sini said after Juergens’ arraignment. "Those of us who are parents or grandparents entrust people every day with our children -- whether it is at school, at camp, at church -- and bus drivers are among those with whom we place the greatest amount of trust."

"It is a miracle that none of the children were physically injured by her reckless actions," Sini added.

"My client is very, very, very thankful that no one was hurt at all," Lemke told reporters.

Authorities said Juergens arrived at the Baiting Hollow Scout Camp in Calverton in a full-size school bus at 4:25 p.m. on July 13 to take campers home. The bus was boarded by 10 children and one teenage counselor before Juergens pulled out of the camp and onto Sound Avenue. The campers were all under age 10, prosecutors said.

Juergens failed to stop at a second location to pick up additional campers. When the counselor informed Juergens that she had passed the children, she attempted to make a U-turn and struck a stone pillar and knocked it over, according to prosecutors.

Juergens did not stop but instead continued east on Sound Avenue, where the bus collided with a truck. Juergens again failed to stop, and instead drove past the campers she had passed earlier and returned to the Scout camp where she had picked up the 10 Cub Scouts and their counselor. The Cub Scouts and the counselor were not injured.

Juergens was arrested by Riverhead Town police and consented to a blood test, which revealed a blood-alcohol content of 0.30%, more than three times the legal threshold of 0.08%.

A lodge at the Baiting Hollow Scout camp was recently dedicated to Boy Scout Andrew McMorris, who was killed by a drunken driver while on a hike in Manorville in 2018. Thomas Murphy of Holbrook was convicted of drunken driving and other charges connected to Andrew’s death and sentenced to 8 1/3 to 25 years in prison.

"When my son passed away I thought, I was naive enough to think, that it would change, that people on Long Island would be shook, that we would change what we were doing, but it is clear. That is not the case," said Andrew’s mother, Alisa McMorris, who attended Juergens’ arraignment.

Suffolk County Supreme Court Justice Stephen Braslow let Juergens out on supervised release that includes GPS monitoring. She will also be subject to alcohol and narcotic screening and will be required to wear a bracelet that can detect the presence of alcohol in the wearer’s sweat.

Juergens faces a maximum sentence of 2 1/3 to 7 years in prison. She is scheduled to return to court Sept. 15.