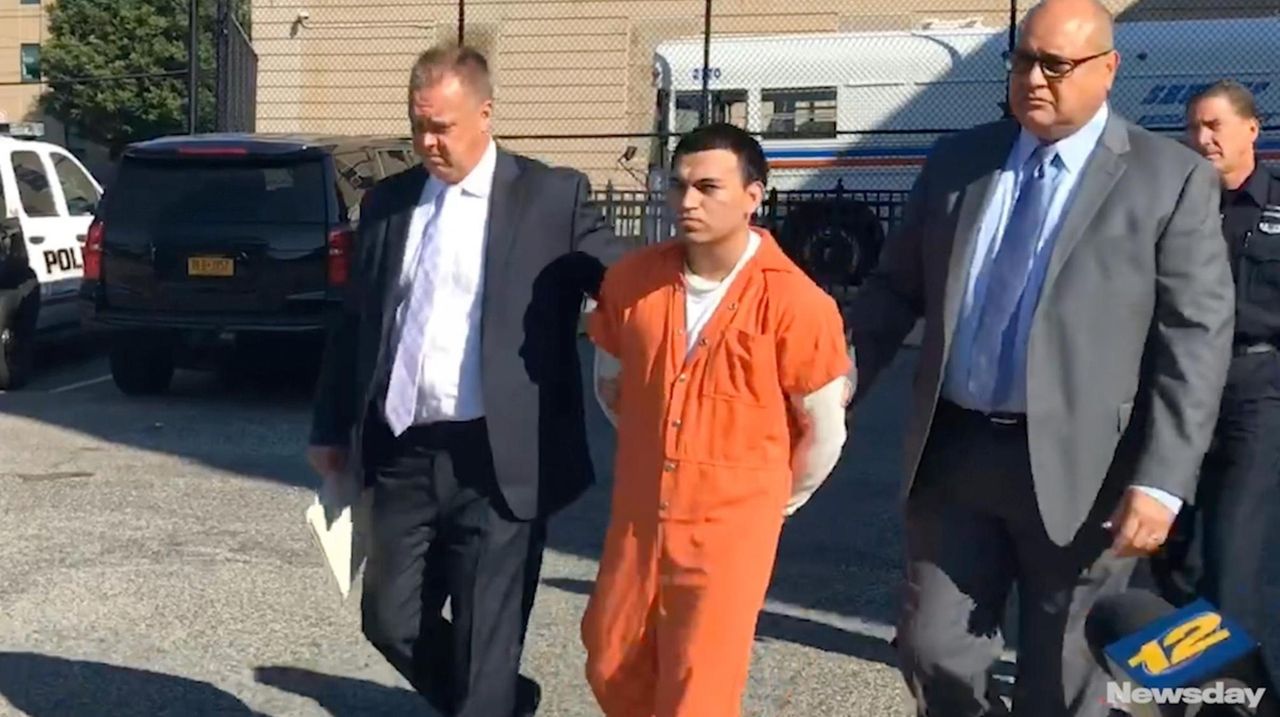 Carlos Benitez-Hernandez of Uniondale, who was charged with the killing of a teenager last year whose remains were discovered Wednesday buried in East Meadow, is walked to a police car outside the Nassau County Police Department on Thursday ahead of his arraignment.  Credit: Newsday

A  "self-admitted MS-13 member" pleaded not guilty Thursday to a murder charge, with authorities alleging he and others in the gang "viciously and barbarically" wielded machetes in the 2017 killing of an unidentified male whose remains were discovered Wednesday in East Meadow.

Carlos Benitez-Hernandez, 21, of Uniondale, appeared briefly in Hempstead District Court for an arraignment where Judge Elizabeth Fox-McDonough remanded him back into custody without bail.

Nassau police said Benitez-Hernandez and at least four other members of the crime syndicate with ties to El Salvador took part in the Aug. 13, 2017, slaying in a sump east of the Meadowbrook State Parkway.

The four other alleged suspects, whom authorities have yet to publicly identify, are already in county or federal custody, according to police. DNA testing will be performed to determine the identity of the victim, authorities said.

Investigators made their way through bramble to locate the remains of the victim, who police said was in his late teens or early 20s. The discovery came after a joint probe by Nassau authorities, the federal Department of Homeland Security and the U.S. Drug Enforcement Administration.

Benitez-Hernandez acted “in concert with others” at about 11 p.m. on the night in question, to intentionally kill the victim by striking him numerous times “with a sharp cutting instrument believed to be a machete,” according to a court complaint.

An attorney from Nassau’s Legal Aid Society represented Benitez-Hernandez in court as a Spanish-speaking translator relayed the proceedings to him. Police said he is from El Salvador, came to the United States through Texas, and already was in federal custody on an immigration detainer before his arrest Tuesday  morning.

Police wouldn’t say what led them to Benitez-Hernandez’s arrest before the recovery of the victim’s remains. They said he had been released on parole "just prior" to the victim's killing and had spent three years behind bars.

Prosecutor Jared Rosenblatt asked the judge to keep Benitez-Hernandez behind bars without bail.

“The defendant viciously and barbarically attacked another person, killing him,” Rosenblatt said at the arraignment.

MS-13 members lured the victim into the woods, with the motive likely relating to “the gang’s displeasure with his actions within the group or something that they felt was disrespectful to them or a threat to them,” Fitzpatrick said.

Since 2016, there have been 10 homicides attributed to MS-13 in Nassau County, including six cases where the bodies of the victims were found buried, police said Thursday.

MS-13’s alleged East Coast leader is behind bars in Nassau County’s jail following a January indictment charging 17 suspected members or associates of the gang with crimes ranging from murder and drug trafficking to conspiracy and weapons possession.

A grand jury in July indicted an 18-year-old man from Freeport on a murder charge in the July 2017 machete slaying of a 15-year-old from Roosevelt whose body authorities found buried in cement three months after his disappearance. Four defendants are now charged in that alleged MS-13 killing.

President Donald Trump, who has blamed gang violence and other crime on illegal immigration, described some Long Island neighborhoods as “bloodstained killing fields” that are “under siege” and need to be liberated from MS-13 during a July 2017 appearance in Brentwood.

Earlier this week, Gov. Andrew M. Cuomo announced Long Island schools and groups would get an extra $8.3 million in state grants for after-school, job training and placement programs in effort to discourage young people from joining MS-13 and other gangs.