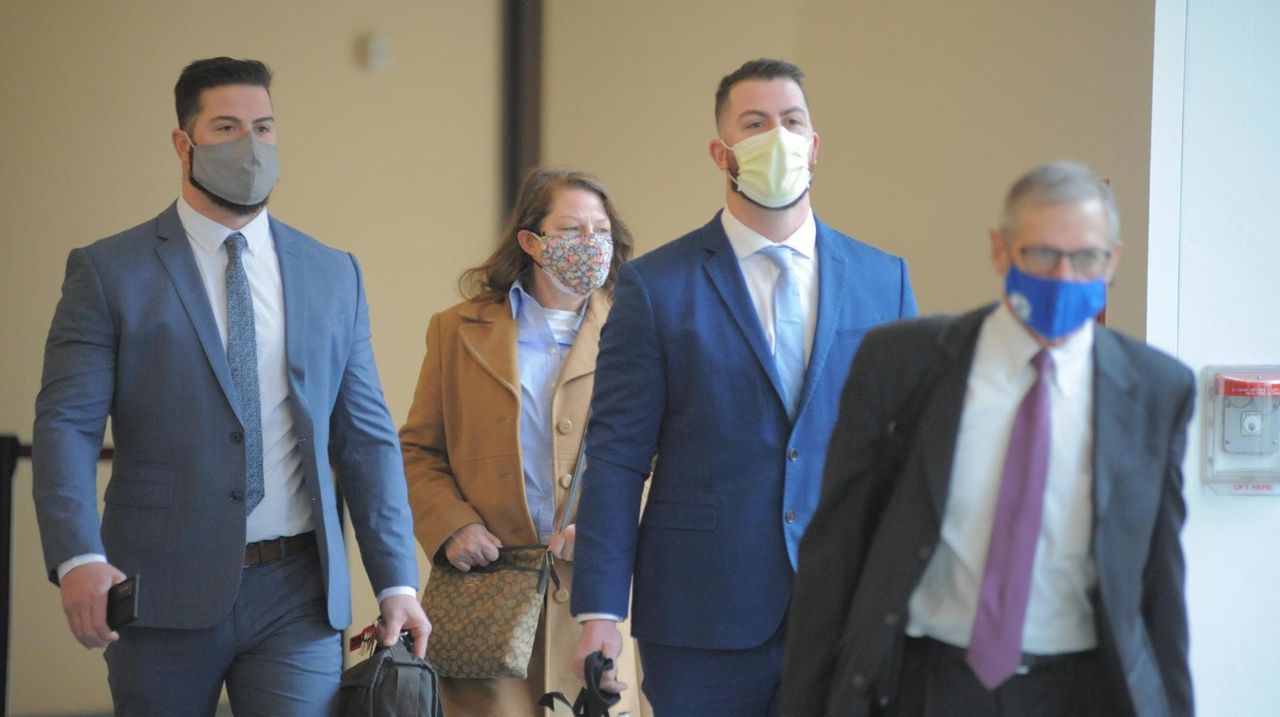 The nurse who drove over and fatally injured Evelyn Rodriguez as the anti-gang activist tried to honor her daughter where she died from alleged MS-13 violence will serve a 9-month jail sentence after what a judge called "a collision course that ended in tragedy."

Ann Marie Drago stood in a Central Islip courtroom Thursday before hearing her sentence and spoke to Rodriguez’s family for the first time, nearly a year after her criminally negligent homicide conviction.

"I made an instinctive decision that caused the very tragic and unnecessary death of your mother," she told Rodriguez’s older daughter, Kelsey Cuevas. "And I am very, very sorry for this."

Drago, 60, said a day didn’t go by when she didn’t think of the loss she caused during the 2018 confrontation in Brentwood.

"I will take my punishment, whatever the court decides. I hope it will help you in your healing process," the Patchogue woman added.

Last March, a Suffolk jury found Drago caused Rodriguez’s death with criminal negligence when she ran over her in a Nissan Rogue in front of the home Drago was selling for her mother.

News 12 Long Island captured the confrontation on a video that became the key evidence in the trial in which jurors also found Drago guilty of criminal mischief and petit larceny.

The deadly encounter on Sept. 14, 2018, involved a dispute about a memorial Rodriguez, 50, of Brentwood, set up in front of the Ray Court home of Drago’s mother.

Rodriguez erected the memorial ahead of a vigil planned for that evening to mark the second anniversary of the discovery of the remains of her 16-year-old daughter, Kayla Cuevas, on the property.

But Drago dismantled the tribute, trashing some items and putting others in the Nissan, while anticipating a visit from people who intended to buy her mother’s home.

Kelsey Cuevas said in court Thursday that Drago seemed more concerned about selling the house than Rodriguez’s life, dubbing the defendant "a monster" and "greedy murderer."

Cuevas, 23, also took aim at a defense contention during the trial: that Drago’s actions stemmed from PTSD she has suffered since a hospital patient attacked her in 2008.

"Ann Marie Drago, let me tell you what PTSD really is: talking to your sister one minute and 20 minutes later she is savagely murdered by MS-13 gang members," she said.

"What was keeping me and my family sane was my mother, Evelyn Rodriguez … You, Ann Marie Drago, you took all of that away from us by recklessly running my mother over as if she was a piece of garbage, leaving her lifeless body on the cold pavement just feet away from where she found her own daughter’s body," Cuevas added.

Acting State Supreme Court Justice Fernando Camacho said the fateful intersection of the lives of Rodriguez and Drago only happened because of the cruelty of those who killed Kayla and her friend, 15-year-old Nisa Mickens.

He said the "coldhearted monsters" put Rodriguez and Drago "on a collision course that ended in tragedy." But Camacho also said before announcing Drago’s sentence that she was "the one who’s ultimately responsible for Evelyn’s death."

Under the top count in her conviction, Drago had faced a maximum of 1-1/3 to 4 years in prison.

The slayings sparked Rodriguez to speak out against gangs. That put the mother in a spotlight that included her testimony at a 2017 congressional hearing and recognition from former President Donald Trump during a State of the Union address.

But then Rodriguez suffered a fractured skull and brain injury less than 300 feet from where authorities recovered Kayla’s remains exactly two years earlier.

During the trial, jurors repeatedly watched the News 12 video that showed Rodriguez being pulled under the Nissan.

Prosecutors said Rodriguez took a step forward at the same time Drago accelerated. But Drago’s attorney, Stephen Kunken, maintained she eased forward only when she believed Rodriguez and Freddy Cuevas, Kayla’s father, had moved away.

The parents angrily confronted Drago after she dismantled the memorial for their daughter, which included a portrait of Kayla in her Junior ROTC uniform, a flower wreath, balloons and candles.

The defense contended Drago did so because she had taken on her mother’s legal responsibility to clean up items mourners constantly left by her home, including burning candles, liquor bottles and pizza boxes.

The defense also said Drago reacted while fearing for her life when the parents ran up to her SUV, shouting expletives while pointing at her. But prosecutors said the parents made no physical threats and showed no weapons.

Drago repeatedly told a grand jury before her indictment that she didn’t see anyone in front of her vehicle before she drove forward.

But Freddy Cuevas, who was Rodriguez’s longtime partner, testified at Drago’s trial that she drove forward "like Evelyn didn’t even exist." He said Thursday that while his family "would love for it to be a harsher sentence," justice had been served.

Suffolk District Attorney Timothy Sini said prosecutors, who asked for a sentence of 1 to 3 years in prison, were "satisfied that justice was done." He also praised Rodriguez’s activism.

"MS-13 committed cruel acts of violence in our community, and Evelyn used a tragedy in her life to fight against that evil. And we will remember her for being that warrior," Sini said Thursday outside the courtroom.

Kunken asked for a sentence of probation and community service. He also read excerpts of letters describing Drago as a compassionate person who chose nursing to help heal people.

The defense attorney said after court that he would file an appeal for Drago, while also applying for a stay of her jail sentence so she potentially could be free during the appellate process.

Kunken added there was "a real question" about whether Drago’s actions met the legal definition of criminally negligent homicide and acknowledged the defense was "very disappointed" by the sentence.

"I think the pressure from the community for some type of retribution was very strong and I told her to expect the worst," he said of Drago.

Court officials took her into custody and led her out in handcuffs Thursday.