Michael Dirkschneider, 31, of Bay Shore was sentenced to 20 years to life in prison on Tuesday, May 23, 2017, for the 2016 killing of Medford resident Alexander Incorvia, 26. Credit: SCPD

A Medford man’s parents and sisters told a Suffolk judge Tuesday that their loved one’s murder last year was incomprehensible in part because he had such affection for his killer.

Dirkschneider pleaded guilty last month to second-degree murder. He admitted luring Incorvia into the woods behind an abandoned former Kmart in Middle Island to rob him on March 29, 2016, and then shooting him in the face.

Incorvia’s mother, Vivi Tsouris, said her son described Dirkschneider to her “as the older brother he never had. You are responsible for ripping a big part of my life out.” 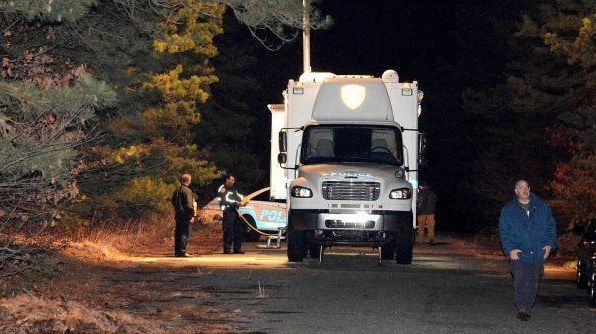 As one daughter held her hand and another patted her back, Tsouris said, “I wish to God I could have protected him from you.”

Incorvia’s older sister, Jackie Corrigan, said her brother was a “fiercely unique young man, with a quick wit.” Her brother’s killing has made her unsure of her own future and left her fearful about whether to have a child, she said.

The victim’s younger sister, Niki Incorvia, said her brother looked forward some day to being a parent, and had even planned a church wedding and a reception at the Long Island Aquarium in Riverhead.

“My pain lives in a place so deep inside that I know it will never leave me,” he said, praising his son’s loyalty and affection. “I hope I never lay eyes on you again.”

Assistant District Attorney Kathleen Kearon said Incorvia’s friendship with Dirkschneider was particularly disturbing. She had said earlier that they met a few years ago at a methadone clinic, and that Dirkschneider had long struggled with drug addiction.

Dirkschneider said nothing in court.

Ambro noted that Dirkschneider’s drug addiction apparently led him to rob and kill his friend.

“It is disturbing that the drug pandemic in this county has come to this, that you are willing to shoot your best friend in the face, for $7,000,” Ambro said. “It is appalling.”