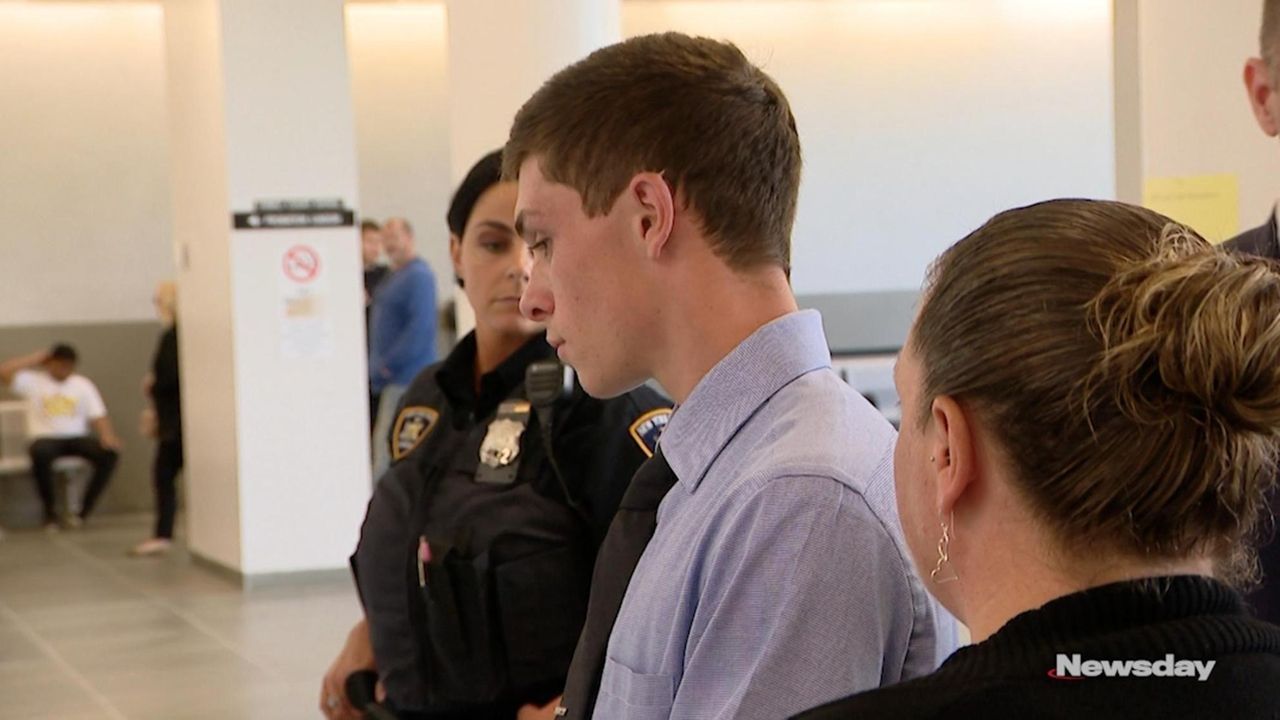 David O'Brien pleaded guilty Friday to killing two friends while driving recklessly and high on Xanax and marijuana. Suffolk County Court Judge Anthony Senft promised to sentence him to no more than 4 to 12 years in prison. Credit: News 12 Long Island

A Lindenhurst man pleaded guilty Friday to killing two friends while driving recklessly and high on Xanax and marijuana.

David O'Brien, 19, admitted all charges in the 17-count indictment. In return for the plea, Suffolk County Court Judge Anthony Senft promised to sentence him to no more than 4 to 12 years in prison. Prosecutors recommended 5 to 15 years, and O'Brien faced a maximum of 8 1/3 to 25 years on the top count of aggravated vehicular homicide.

In response to questions by Assistant District Attorney Marc Lindemann, O'Brien admitted he was driving his 1998 Ford Mustang recklessly and impaired by drugs when he crashed into a tree on North Wellwood Avenue in Lindenhurst on Oct. 9. 2017 — Columbus Day. Joseph Galdorisi, 16, who was sitting in the front passenger seat, died at the scene, while Maggie Miller, 24, of Copiague, who was sitting in the back seat, died hours later.

O'Brien remains free on bail until he is sentenced July 19. He left the Riverhead courthouse without commenting, as did his attorney, George Duncan of Islip Terrace.

Galdorisi's parents, Anthony and Christine Galdorisi, said they were relieved the criminal case is done, although they said they wished O'Brien would serve more time behind bars.

"I wish it was the max," Anthony Galdorisi said. "I wish he could get life. I guess I have to go with it."

He said he had no concern about what motivated O'Brien to plead guilty.

"I could care less about him," he said. "The kid never acknowledged to our family or the girl's family what he did."

Christine Galdorisi said her son's birthday is next week.

"I feel this is like a birthday present for him," she said.

Assistant District Attorney Brendan Ahern, chief of the district attorney's Vehicular Crimes Bureau, said the crime happened during a holiday weekend, much like the one about to begin.

"I hope this case can also stand for something good," he said. "We don't want anymore cases like this. … We hold our breaths at times like this."

He urged adults and teenagers to have a plan for this weekend's holiday, whether it's to have a designated driver, someone they can call for a ride, or using a taxi or ride-share service. There is never a reason to drive while impaired by drugs or alcohol, he said.